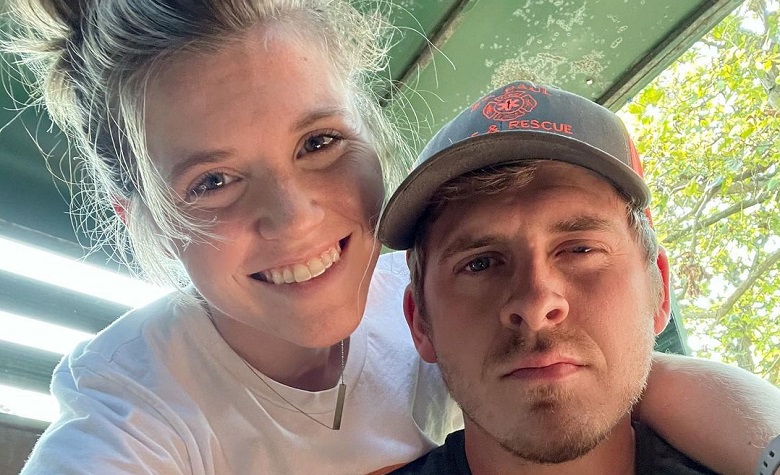 Counting On star Joy-Anna Duggar has been one of the most active Duggars on social media today. Most of the time, Joy-Anna shares adorable clips and pictures with her kids. Fans have been closely following Joy-Anna as well due to her pregnancy as she’s revealed that she’s expecting a baby boy. Now, Joy-Anna is back to share another update for the fans. But this time, Joy-Anna is making fans laugh after sharing a vlog where Austin Forsyth does her makeup.

In a YouTube post, Counting On star Joy-Anna Duggar shared a 9-minute video about Austin Forsyth doing her makeup. The video was filled with hilarious moments between Joy-Anna and Austin. However, the final results impressed the fans. According to some, Austin actually did an incredible job doing Joy-Anna’s makeup. “What a guy!! Out of all the videos that I’ve seen husbands doing their wife’s make-up, he did the best. I give him an 8!” one fan said. “I think he definitely deserves a 7 or 8 for a first time. I think he did really well and was a good sport!” another fan added. Austin also left the fans in awe after telling Joy-Anna that he would never be embarrassed going on a dinner date with her despite doing her makeup.

Counting On star Joy-Anna Duggar also took to social media to share her 2-mile morning walk with her family. Joy-Anna also shared a glimpse of her baby bump, which is getting a lot bigger lately. Apparently, Joy-Anna is expected to give birth around May 2023. She has also revealed that her upcoming baby boy will use the name “James’ on either his first or last name. Jim Bob Duggar and Michelle Duggar have already shown their excitement for their upcoming grandson as well. Many are also hoping that Joy-Anna will continue to share updates about her upcoming baby boy, especially after her recent revelation that one of his kidneys is a little bigger than the other.

Counting On: Joy-Anna Duggar Becoming The Bridge For Her Family To Get Closer

Counting On fans are also praising Joy-Anna Duggar for her efforts in making up small gatherings for her family. Apparently, Joy-Anna recently took to YouTube to share their “special sister time” where most of her sisters spend time with each other including Michelle Duggar. Fans are also surprised to see Jill Duggar spending time with Michelle as well. According to some, it seems that Joy-Anna is becoming the bridge for her family to get closer. Fans also think that the arrival of her baby boy will make things a lot better for the Duggar family.

It’s clear to see that Joy-Anna is focusing more on positivity amid her pregnancy. Meanwhile, fans are hoping that the Duggars will finally get the healing they need after all the controversies they’ve been through since Josh Duggar’s conviction. What are your thoughts? Let us know in the comments.