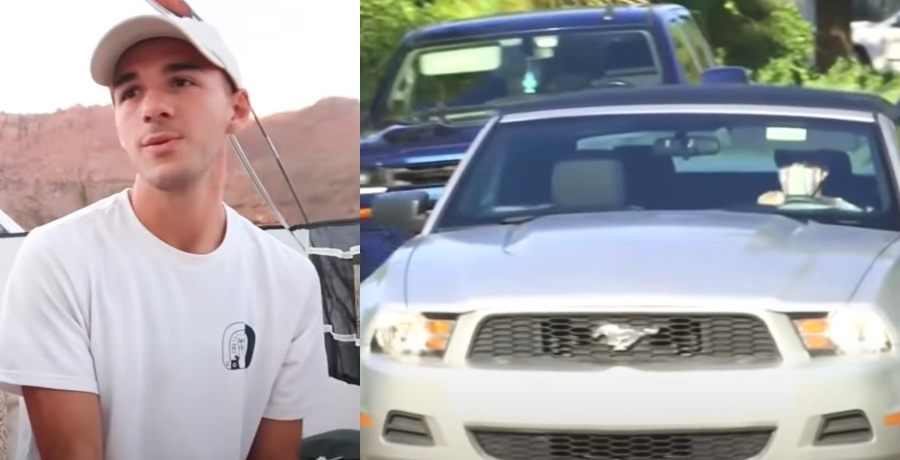 Earlier this week, law enforcement took possession of Brian Laundrie’s Ford Mustang. The vehicle along with other pieces of evidence was taken from the Laundrie residence after it was confirmed remains found in Wyoming belong to Gabby Petito. Now, the vehicle has been apparently released back to his parents. What’s going on?

A news report captured video of Brian Laundrie’s mother driving her missing son’s Mustang home on Thursday. The video shows Laundrie’s silver Mustang driving down the road to their residence. His mother, masked up, is behind the wheel. Following closely behind is a law enforcement officer. After she parks the vehicle, she climbs into the red pickup driven by Brian’s father then they left the home. Law enforcement was following closely behind.

So far law enforcement has not said if they found anything significant in the items removed from the Laundrie residence.

No charges have been filed and Brian still remains a person of interest in the case.

He was last seen on September 14 when his parents claim he left to hike the Carlton Nature Reserve. Laundrie left with a backpack. His car was parked at the reserve for a few days before being driven home by his parents.

The Petito family is awaiting the coroner’s office in Wyoming to release her remains so they can plan a funeral. While they grieve, law enforcement searches for Brian Laundrie.

There is no telling where he could be at this point and the FBI is asking anyone with tips to phone in a report. Law enforcement, including dive teams, continue to search the reserve for Laundrie.

Northport Police revealed so far they have found nothing indicative of Laundrie being near.

A new tip surfaced on TikTok revealing that a flight attendant saw a similar-looking man in Toronto Canada.

So far, nobody seems to know if the tip was legit or if the FBI is following up on it.

#SARASOTACOUNTY #NORTHPORT
There’s been a little movement today outside of the Laundrie family home. Brian’s parents left the home together in their red truck, followed by a number of unmarked police cars. The mustang, which was taken by the FBI on Monday, is back at the house. pic.twitter.com/DMUpOQcanY

He has survival skills

Another interview came out revealing that Brian Laundrie is able to survive alone for months. The reported best friend of Gabby Petito said Brian would talk about the 3 months he spent hiking in the Appalachians. She has no doubt he could survive a long time out on his own.

She also said Laundrie was always controlling and jealous of Gabby. He didn’t like her having friends. Rose Davis was planning to meet Gabby and Brian at Yellowstone sometime in September.