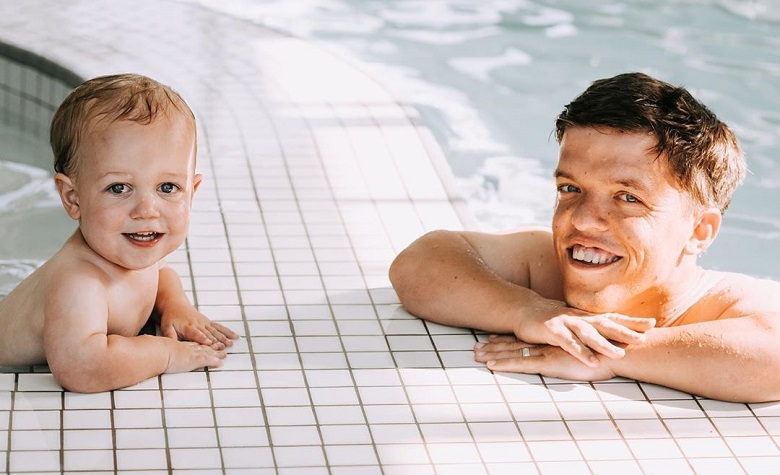 Little People, Big World star Zach Roloff was just having fun but when little Jackson ends up in tears and extremely upset, it’s not fun anymore. Fans of the LPBW couple point this out.

Zach is a prankster. While Tori Roloff knows this about her husband, it looks like it will take little Jackson Roloff some time to get used to it.

Speaking of getting used to it, below is little Jackson in the aftermath of his Daddy’s prank. He looks both concerned and a little angry. But beside Jackson not liking the prank, fans thought it was a bit too dangerous.

Although when his mom asks him if he is angry, this youngster from the Little People, Big World family tells his mom “no”. But Tori tells her son that he looks angry.

It’s summertime and this is when the backyard pools of all shapes and sizes appear. Tori and Zach put a little kiddie wading pool in the backyard for their son.

It looks as if the Little People, Big World mom did things appropriately. Tori picked up Jackson and she attempted to slowly get him acclimated to the water.

But as you can see above, Zach decided to hurry things up a bit. Zach ran up from behind and pushed Tori into the pool.

The picture below demonstrates how Tori fell with Jackson in her arms. Online users were upset to see this.

Maybe the young Little People, Big World dad didn’t see Jackson in Tori’s arms. Or if he did see him maybe he didn’t think it would cause a problem.

Zach’s train of thought is not known. But Tori went over into the water, emerging Jackson from head to toe. It looked like she even might have landed on him.

One social media user asked if anyone else found this video nothing to laugh about. And the answers came rolling in. Some people suggested Jackson could have inhaled water when his face emerged into the pool. Others saw how Tori came down almost on top of her son.

Some people backed Zach and told everyone how their concerns were ridiculous. Some chalked it up to just horseplaying within a family but others didn’t agree. Comments included:

“Maybe I’m too old, but I never looked at a woman holding a baby and thought it’d be funny to push her into anything. Such an idiot.”

“Yeah I can see him pushing her in a full size pool. But a hard kiddie pool with shallow water? High potential to hurt her face or break a wrist or something. How about helping her get the kid in? He was literally lying in wait to shove her.”

“Totally not cool on his part, I don’t see how he thought this would be smart or funny to his kid & wife at all 🙁 they’re gonna get heat and tori’s going to be upset.”

Most people saw the danger in this as Zach pushed the two of them into a very shallow and hard pool. But others did come to the Little People, Big World father’s defense.

Come back to Entertainment Chronicle for the latest news on your favorite reality shows like Little People Big World.