90 Day Fiance celeb Baby Girl Lisa Hamme feels humiliated today after losing the love of her life along with a pretty good gig on the TLC reality series. Right now she appears focused on payback for what she believes Usman did to her.

It appears this 90 Day Fiance cast member tells her story to anyone who will listen. So, she’s done several Youtube channel interviews so far. First of all, Lisa Hamme claims Usman deeply hurt her. She also claims she has evidence that Usman used her from the start. 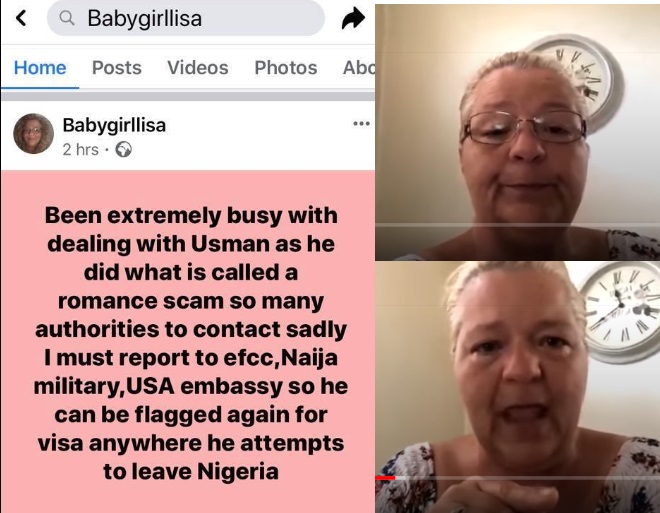 She claims she really fell hard for Usman. Baby Girl Lisa also said that she’s been good to him by giving him gifts. But apparently he didn’t reciprocate when it came to demonstrating a real love for her. The 90 Day Fiance celeb broke down in tears in this latest interview as she shares how Usman did her wrong.

Now that Lisa Hamme sees the real Usman, or so she says, she’s done mountains of paperwork for different government and law enforcement agencies. She claims she intends to stop her 90 Day Fiance partner in his tracks if he ever attempts to scam another woman.

Lisa Hamme said that she filled out all the forms to basically keep him in Nigeria. So, it sounds as if her soon-to-be ex-husband’s attempts to get a visa to travel to another country he’ll be denied.

Lisa claims that Usman did what is referred to as a romance scam. This 90 Day Fiance celeb notified all kinds of authorities about her history with him.

Lisa battled with the interviewer who seemed to stick up for Usman at times. This heartbroken wife repeated over and over again to the guy that he needs to do his research.

Usman continues to say that Lisa was abusive. This is something the fans of this TLC reality show did see during the season. So there’s evidence to back up his claims.

After the interview continued for some time, Lisa crumbled into tears. She really fell hard for the Nigerian man who eventually became her husband. Now devastated over the way he allegedly treated her, she turns the tables on him.  As far as Lisa sees it, he humiliated her in front of the world.

If Usman decides to find yet another American woman to make his way over to the US, he may be in for a surprise. It sounds like Lisa did everything in her power to stop it.

It looks as if she’s attempted to red-flag her 90 Day Fiance co-star if he even tries to visit the US or any other country on his own. This would dash Usman’s dreams of making it as a rap star in America and beyond.