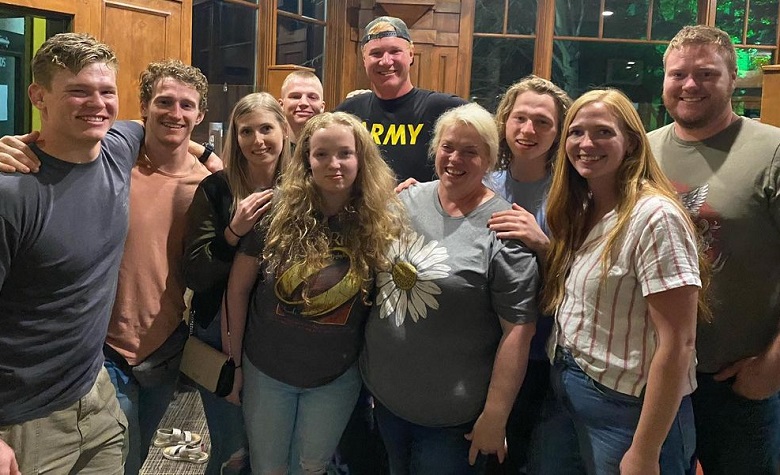 Sister Wives star Janelle Brown always keeps in touch with her fans, which they love. Most of the time, Janelle shares incredible updates about her healthy lifestyle. Janelle has been receiving a lot of support from the fans as she continues to take Christine Brown’s side throughout Season 17. The former sister wives have also been so close behind the cameras as well. They even traveled across countries together with their kids amid Christine’s departure from the plural family. Now, Janelle is back to share another update for the fans. This time, Janelle shared how she celebrated Thanksgiving amid Kody Brown’s absence.

In a social media post, Sister Wives star Janelle Brown shared how they celebrated Thanksgiving. According to Janelle, her kids got together and took care of the food. Janelle also shared a picture of Hunter Brown preparing the Turkey. Moments later, Janelle shared a clip of their kitchen with tons of meals contributed by her friends and family. It’s unclear if Kody Brown is with Janelle and her kids for the holidays. However, fans doubt that Kody will ever spend time with Janelle and her kids. Some also believe that Kody may have spent Thanksgiving with Robyn Brown and continue to live like a monogamous couple.

How Did The Other Wives Celebrated Thanksgiving?

At this point, Sister Wives stars Christine Brown, Meri Brown, and Robyn Brown have yet to share how they celebrated Thanksgiving. Fans also find it odd that Meri still hasn’t shared how she spent the holidays despite her online activities. But fans believe that Meri may have celebrated Thanksgiving in her B&B in Utah with some of her friends. Meanwhile, Christine has yet to share any clips or pictures with her kids for the holidays. However, some think Christine wouldn’t miss sharing their holidays with her fans, especially now that she’s living her best life in Utah after leaving the plural family in Flagstaff. On the other hand, Robyn remains silent on social media similar to Kody Brown.

Sister Wives: Fans Think The Future Holidays Of The Plural Family Will Be Heartbreaking

Fans are already speculating that the future holidays of the plural family will be heartbreaking due to Christine Brown’s departure. Apparently, fans recalled that Christine is usually the one who manages most of the family’s gatherings, especially during the holidays. Some also think that her absence will be felt as she usually spreads positive energy, especially to the kids. Meanwhile, fans can only hope that Kody Brown will finally do something to fix his family and bring everyone back on the same page.

It’s clear to see how bad things have turned in the plural family. It also appears that Kody failed to make Christine realize that she won’t be happy in Utah as she continues to live her best life with her kids. What are your thoughts? Let us know and watch Sister Wives Sundays on TLC.