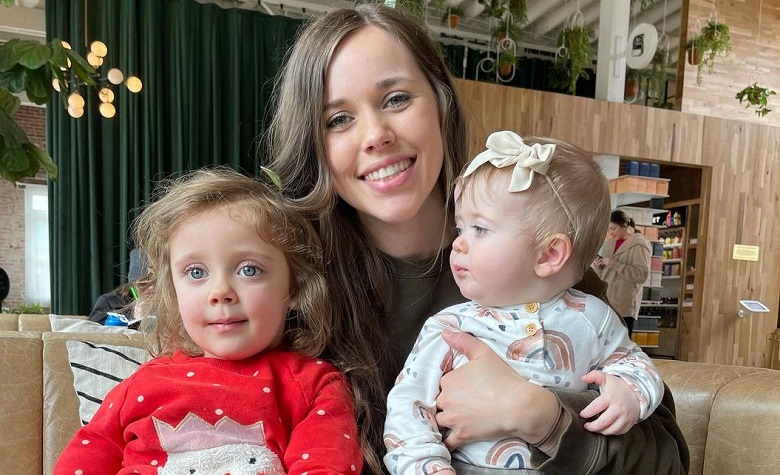 Counting On star Jessa Duggar loves to share wholesome stories about her kids. It also appears that Jessa is becoming more active on social media lately after moving to their fixer-upper. Fans are also impressed by Jessa’s new home as it fits her growing family so well. Jessa and Ben Seewald have been doing a great job with their parenting as well. Apparently, Jessa has been sharing her homeschooling and bible study sessions. Jessa also left the fans in awe after sharing an adorable clip of Ben and their kids dancing to a hip-hop song. Now, Jessa is back to share another adorable story with the fans. This time, Jessa shares Fern’s lovely playtime with her sister, Ivy.

In a social media post, Counting On star Jessa Duggar shared a clip from Fern and Ivy’s lovely playtime. “Time slow down,” Jessa captioned. Apparently, Ivy is letting Fern take a sip in her juice. And with each tip she sipped, the two shared big laughs. It’s clear to see that Ivy is enjoying her role as a big sister to Fern. Jessa also revealed that Ivy doesn’t want to hand over Fern when she first arrived at their home. Meanwhile, fans think that the kids’ incredible love for each other is an example of Jessa and Ben Seewald’s incredible parenting. Fans also pointed out how big Fern has become in just a short amount of time. Others are also saying that Jessa’s daughters are starting to look like her.

Jessa Continues To Show Support To Her Siblings

Aside from her kids, Counting On star Jessa Duggar has been putting a lot of attention on her siblings as well. It’s known that Josh Duggar’s CSAM arrest left a big rift in the Duggar family. But it seems that Jessa is trying her best to keep everyone on the same page amid all the controversies they’ve been facing. At one point, Jessa went out with Joy-Anna Duggar and Jill Duggar for quick shopping. She also left a sweet comment on Jinger Duggar’s recent social media post with Jeremy Vuolo, showing that they’re still in touch despite their distance. Fans are also praising Jill for not holding back against the haters whenever one of her siblings is getting criticized.

Counting On: Jill Duggar’s Parents No Longer Visiting Their Grandkids?

At this point, Counting On star Jessa Duggar has yet to share if Jim Bob Duggar and Michelle Duggar are still visiting their grandkids. They’ve been silent on social media since Josh Duggar’s conviction. Fans also find it odd that the two haven’t been acknowledging their newborn grandkids, which they usually do back then. Meanwhile, fans think Jim Bob and Michelle are laying low in the hopes that fans will eventually love them again. However, it seems that the number of people wanting to expose the family has been increasing lately, and it may become a big challenge for Jim Bob and Michelle to redeem themselves.

It’s clear to see that the Duggar kids are trying to live happy lives despite all the controversies they’re facing since Josh’s arrest. Will Jim Bob and Michelle finally do something to address all the issues and clean their reputation?