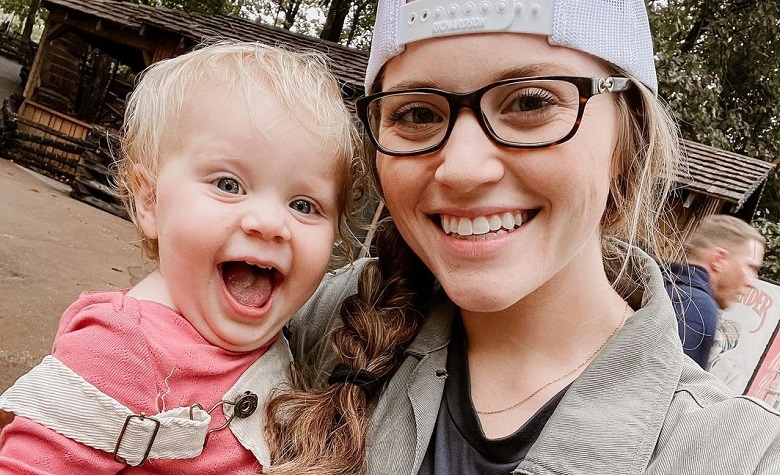 Counting On star Joy-Anna Duggar recently made headlines after returning to social media. According to Joy-Anna, she took a 6-month hiatus from the online world and does not regret doing so. Fans are also cheering for Joy-Anna and her family as they continue living their best lives despite all the controversies of the Duggar family. Now, Joy-Anna is back to share another update for the fans. This time, Joy-Anna shared that her daughter, Evelyn, is celebrating her 2nd birthday.

In a social media post, Counting On star Joy-Anna Duggar shared an adorable picture of her daughter, Evelyn, as she celebrates her 2nd birthday. “Evelyn Mae is TWO years old! Happy Birthday to our Princess!” Joy-Anna captioned. Families and friends of Joy-Anna also took her comment section to wish Evelyn a happy birthday. Meanwhile, some talked about how big Evelyn has become since Joy-Ann last posted a picture of her. Some also pointed out that she’s starting to look more like her father, Austin Forsyth.

Will Jim Bob & Michelle Celebrate With The Family?

At this point, Joy-Anna has yet to share if her parents, Jim Bob and Michelle Duggar, have paid them a visit for Evelyn’s birthday. Jim Bob and Michelle have been silent on social media for months. Fans also noticed that they’ve been out of sight when it comes to their newborn grandkids, especially Jill Duggar’s newborn son, Frederick. Meanwhile, some fans believe that the two are trying their best to avoid social media due to the controversies they’ve been facing since Josh Duggar’s CSAM arrest.

Counting On: What’s Next For Joy-Anna Duggar & Austin Forsyth?

At this point, Joy-Anna and Austin Forsyth have yet to share their next big project after returning to social media. However, fans believe that they’ll be focusing more on vlogging in the coming months similar to some of Joy-Anna’s siblings. Joy-Anna also revealed that she and Austin have been working on housing projects lately. Due to this, fans can expect that they’ll still remain busy despite returning to the online world.

Meanwhile, some fans are hoping that Joy-Anna will share more updates about her family in her next post, especially regarding the speech therapy of her son, Gideon. Do you think her parents celebrated Evelyn’s big day or at least reached out to say something? Or did they stay silent on the big day? Let us know your thoughts in the comments.