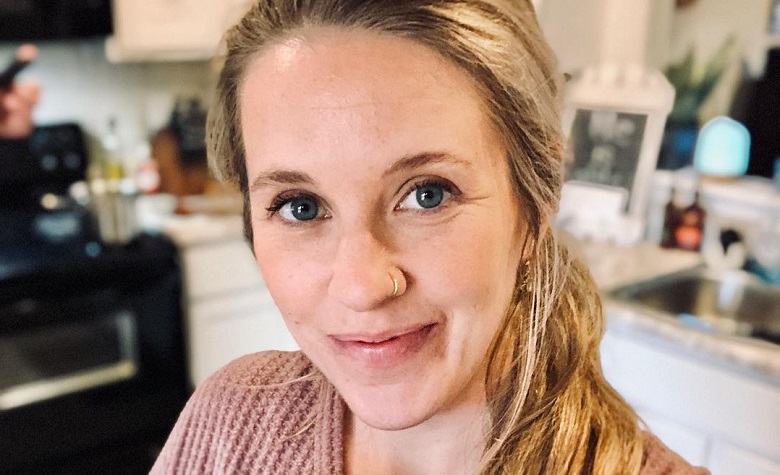 Counting On star Jill Duggar has been keeping in touch with the fans lately. Most of the time, Jill shares adorable updates about her kids. Recently, Jill revealed that Israel moved up one level in his swimming school. Fans are also getting excited as Jill and her family are getting closer to finally moving into their new house. Now, Jill is back to share another update for the fans. This time, Jill shows off her craftsmanship amid her pregnancy.

In a social media post, Counting On star Jill Duggar shared a picture of the shelf she’s been working on. Jill even made a humorous joke about how her baby bump becomes useful when it comes to hanging some of her light materials. “When the bump comes in handy while hanging things up,” Jill said. It’s clear to see that Jill has the same craftsmanship as Jessa Duggar and Jana Duggar. Fans are also impressed that Jill was able to do some crafting amid her pregnancy. Some even took to Jill’s comment section to talk about how her upcoming third son is already helping her.

Counting On fans also noticed that Jill Duggar has become more active on social media since Josh Duggar’s sentence. According to some, it’s a clear indication that Jill is finally recovering from all the stress caused by Josh. Some are also expecting that most of the Duggars will now return to social media after Josh’s sentence. However, others think that Jim Bob Duggar and Michelle Duggar will continue to remain silent as they continue to receive tons of criticism after supporting Josh despite his immoral sins.

Counting On: Will Jill & Derick Speak Up Against The Duggars?

Counting On stars Jill Duggar and Derick Dillard have already released their statements regarding Josh Duggar’s sentence. The two are satisfied with the years that Josh will spend in jail, which is 12 and a half years. However, some think that it’s not over yet for Jill and Derick. Apparently, Derick has already expressed his interest in releasing a tell-all book against the Duggar family. It also appears that Amy Duggar is showing full support towards Jill and Derick when it comes to going against Jim Bob Duggar and Michelle Duggar.

It’s clear to see that things have been falling apart in the Duggar family since Josh’s arrest. Meanwhile, some fans are hoping that the family will recover and bring everything back to what it used to be.

‘Counting On’: Jinger Back In Workout Routine After Recovering From Flu
’90 Day Fiance’: Russ Mayfield Shares Progress Of Voiceover Career
‘Sister Wives’: Gwendlyn Brown Is Officially Engaged
‘Sister Wives’: Fans Call Out Kody For His Statements About Janelle
‘Counting On’: James Teases Something ‘Wild’ Is Coming For The Duggars