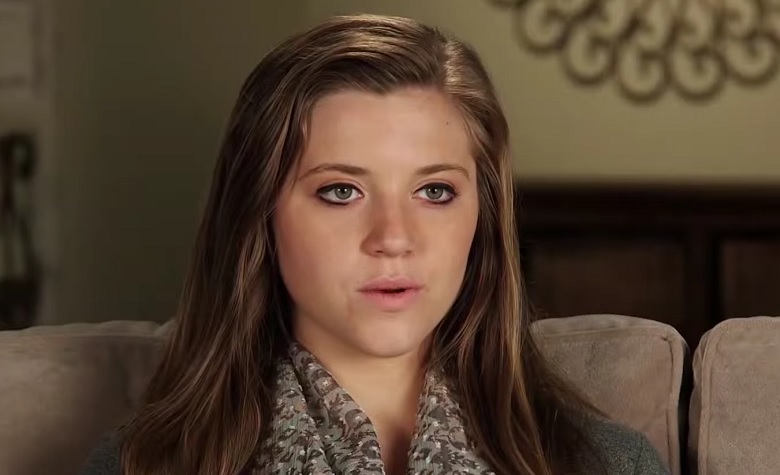 Counting On star Jill Duggar Dillard and her husband Derick Dillard have been open about their feud with the Duggars. The couple previously announced that they have distanced themselves from the Duggars due to their strict rules. Since then, Jill has been rebelling against Jim Bob Duggar and Michelle Duggar’s family rules. Now, it appears that Joy-Anna Duggar Forsyth doesn’t like the way her sister has been rebelling. She recently liked a post on social media that criticizes Jill and her recent actions.

In a social media post, a fan shared a lengthy message talking about Counting On star Jill Duggar’s rebellious side. “I realize Jill Duggar needs to distance herself from her family for mental health reasons, but I don’t understand why they need to make their issues with the family public”, the fan said. The fan also talked about Jill and Derick Dillard seemingly using the publicity of their feud to make extra income, which is not a very Christian way. Meanwhile, fans noticed that Joy-Anna Duggar liked the post, which seems to show that she agreed with what the fan said. Moments later, Joy-Anna unliked the post as fans started talking about her. 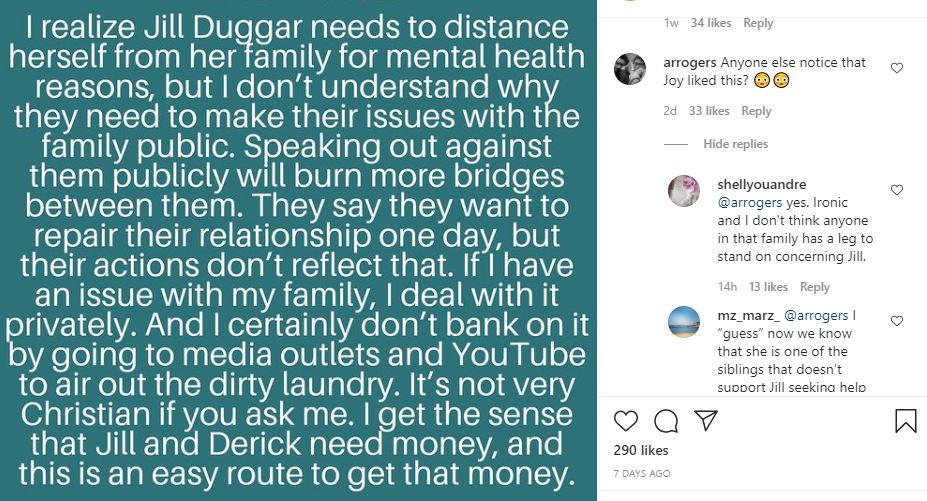 Counting On star Joy-Anna Duggar isn’t the only one who hates the rebellious side of Jill Duggar. Apparently, Jinger Duggar also shared her thoughts about her sister Jill. According to reports, Jinger is disappointed with Jill and was upset when she estranged herself from the Duggars. Reports also said that Jinger doesn’t like the tell-all book that Jill’s husband Derick Dillard plans to write. Apparently, the book covers the story of Jill and Derick’s marriage. It is also believed to feature some shocking revelations inside the Duggars, which can damage Jim Bob Duggar’s media empire.

Counting On star Jill Duggar has been bonding with her rebellious cousin Amy King, who previously made headlines for her wine challenge. Apparently, Amy seemingly disregarded being a Duggar after she replied to a fan asking if the Duggars drink alcohol. “Cheers I’m a King”, Amy said. Meanwhile, the two were previously seen in a thrift store amid the raging Covid-19. Jill even brought her son, Sam to the thrift store, making a lot of fans furious. Aside from that, Jill was also slammed after sharing her intimacy with Derick in front of the kids, which is against Jim Bob’s rules about modesty.

‘Sister Wives’: Meri Reunites With Janelle’s Sons, Shows Motherly Side
’90 Day Fiance’: David Shares What He Relishes The Most In Thailand
‘Counting On’: Jinger Celebrates Release Of Book In NYC
‘Sister Wives’: Why Is Christine Brown Returning To Flagstaff?
‘Sister Wives’: Should Christine Be An Advocate Against Polygamy?