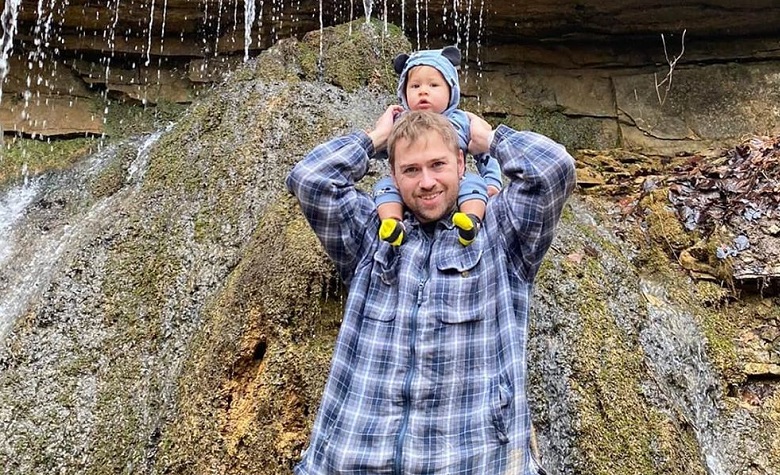 90 Day Fiance celeb Paul Staehle posted a video of himself as he parks the baby’s stroller on what he may think is secure ground, but it’s not. It seems obvious the stroller sits on an incline. So, as soon as he turns his back, that unmanned stroller runs down the driveway and into the road.

Thankfully, he has baby Pierre in his arms when this happens. You see the tot in his arms as he walks through the garage and into the house. Fans hopped online to share their thoughts. Many offered how thankful they were that Paul picked up his toddler son before the stroller went rolling down the driveway.

A few parents out there recognized this incident as something that they experienced themselves. Several people shared how this happened to them. It looks like by Paul diverted all those bad parenting comments. If he didn’t have Pierre in his arms the negative coments would surely follow.

Instead, it looks as though he made a few 90 Day Fiance friends online. People who saw themselves in his place for this incident shared a laugh with Paul. But the question still came up as to why he is taping himself walking up the driveway and into the house?

Did Paul decide to stage this event so he could post it online? The previews capture how this 90 Day Fiance husband and father moves his little growing family into a one-room house. Check out the preview video below.

This driveway clip certainly doesn’t come from the house that 90 Day Fiance fans saw on this preview for Sunday night’s show. Paul is entering the house through a garage. This is something his one-room house didn’t have. So fans want to know if Paul moved the family in with his mother.

The video looks purposely made as it’s not coming from an angle to suggest it’s a camera that mounted for security. Today those camera monitors are popular at the front doors of homes. But this video looks like it comes from a camera placed in his garage.

90 Day Fiance: Is Paul That Bored?

People are doing all sorts of things to entertain themselfs during the stay-at-home event due to the pandemic. Maybe Paul decided to make a video to entertain his TLC reality series followers. If that’s the case, it appears he succeeded.

Whether he staged it or not, fans still liked what they saw. Some followers even shared their own stories about their kid’s carriage, stroller, or wagon that got away.