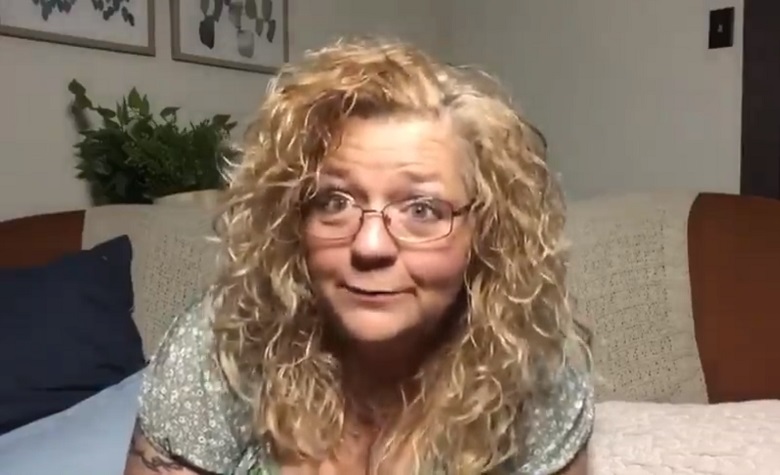 90 Day Fiance controversial celebrity Baby Girl Lisa Hamme won’t go away despite TLC giving her the old heave-ho after only one season on the show. It seems the taste of 15 minutes of fame leaves her wanting more. So, it appears she’s going after that.

The 90 Day Fiance star sells herself to fans as a tough woman with the theme of “I’m Boss” taking shape today. Lisa Hamme recently hit social media to give followers a sneak peek of what she has planned.

So far all you get to see is Lisa appearing on a circa 1970s TV set with the word “Boss” lit up next to her. Rap music plays with the lyrics that sound like “A female runs this place” followed by, “who’s your daddy now”- which plays over and over again.

It’s worth noting that Lisa chooses rap music for a few of her posts. Is this a dig at Usman, her estranged husband who is attempting to break into the rap music business?

Taking a Page From Big Ed?

Maybe she’s following in the footsteps of Big Ed, who is another 90 Day Fiance star attempting to keep his little bit of fame alive. He’s got all kinds of stuff with a Big Ed label for sale.

So far Lisa offers a ‘”sneak peek” of her new items with the shirt below saying “I’m Boss” and the initials BGL for Baby Girl Lisa.

This 90 Day Fiance scorned wife also offers some cryptic messages on her social media sites. Some fans believe she’s on a mission to ruin Usman, after claiming he used her in an attempt to get a visa.

She also claimed that she filed forms with the government in Nigeria basically flagging him as a scammer. She wants any further attempts made by Usman for a visa denied.

This 90 Day Fiance star, who went on to become Usman’s wife, wasn’t about to go away quietly. Lisa made sure to air out all the dirty laundry that transpired between the two.

The 90 Day Fiance audience saw Lisa Hamme in action on the TLC reality series. She didn’t treat Usman very nice at times and the fans as much as told her so on social media.

Maybe that “I’m Boss” theme she’s got going today fits her because she did have the tendency to boss around Usman. Anyway, it looks like Lisa is doing just about everything she can to keep her name and face out there.

Reports suggest that Lisa might appear on the podcast “90 Days On Fire,“ since she’s promoting this on her social media sites. It appears several websites got together to interview 90 Day Fiance stars on this podcast. While Lisa’s name isn’t on the promo, it sounds pretty certain she’ll be a guest.

It’s probably safe to say, she’ll have even more info to share about her relationship explosion.

She’s even inserted herself into her own TV set but that channel is bound to change soon. Without the TLC logo on that screen, Lisa can’t expect to go very far.