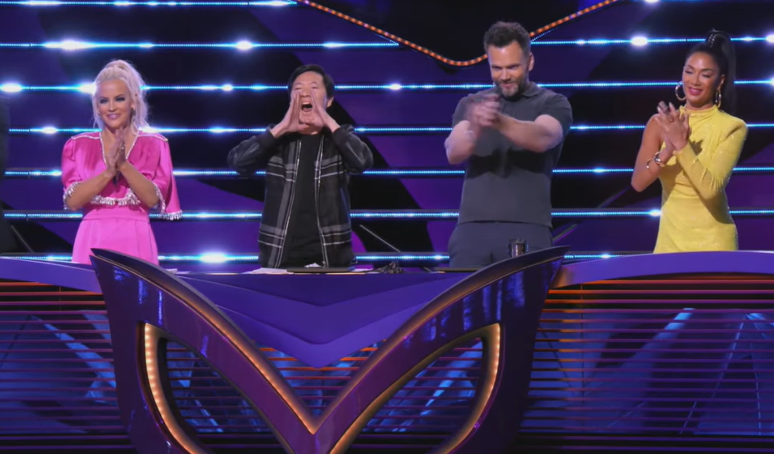 The Masked Singer’s Group C is now down to four. The five remaining masks took to the stage last night. However, only four will advance to the group finals next week. This was our second time hearing this group. So, Astronaut, Swan, Rhino, T-Rex and Night Angel all performed their chosen songs. Then, of course, it’s up to the celebrity panel of judges of  Jenny McCarthy, Nicole Scherzinger, Ken Jeong, and Robin Thicke, and guest judge Joel McHale plus the studio audience, to choose the weakest contestant for elimination.

By the end of the hour, Group C was now four. The elimination was not really a shock to fans. Now the competition toughens as the remaining four battle to make it to the  Super 9 and ultimately win the Golden Mask trophy.

The Masked Singer: The Swan Sang Her Swan Song

The Masked Singer contestants sang from behind their masks last night. However, as usual, one was sent home. This week the studio audience, as well as the panel of judges, voted for Swan. This performer chose “I Hate Myself for Loving You” by Joan Jett and The Blackhearts for her song. However, she fell short and this was her “swan song”.

As the crowd chanted, ” take it off, take it off”, the Swan was revealed as actress Bella Thorne. Again the panel was unable to guess this mask. Plus, this is the second time a mask was revealed that was a co-star of panelist Ken Jeong. The Masked Singer fans recall Margaret Cho was revealed as the Poodle in Season 1. She co-starred with Ken on his ABC sitcom Dr. Ken. Bella Thorne and Ken Jeong worked together on the movie The Duff. So Ken is now two for two for not guessing his co-stars when they appeared on The Masked Singer.

Next Week on The Masked Singer the final 4 members of Group C will battle it out to advance to the Super 9. Astronaut, Night  Angel, Rhino and T-Rex will all have to bring their A-game. The remaining three will join the finalists from Group A (Kangaroo, White Tiger, and Turtle) and Group B (Kitty, Frog, and Banana). Then those nine will battle it out weekly until only one remains and takes home the coveted Golden mask trophy.

Tune into The Masked Singer Wednesday night at 8 pm on Fox to see if your favorite Group C contestant advances to the group finals.