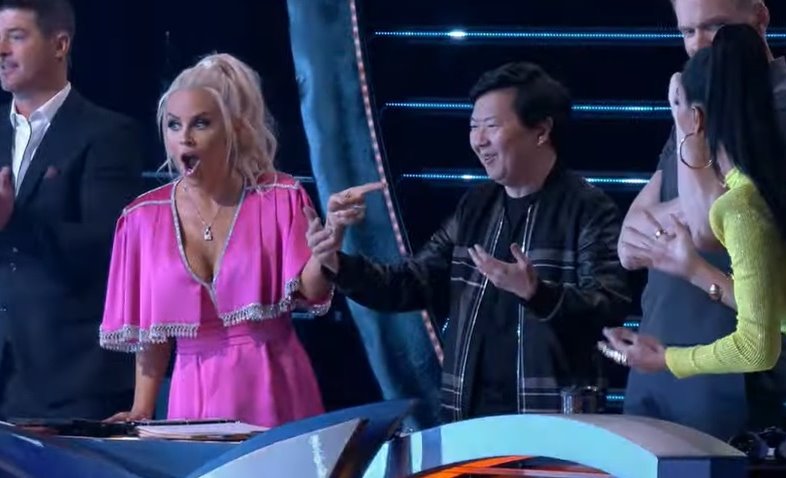 The Masked Singer this week features the five remaining celebrities in Group C. Last week the judges, as well as the host Nick Cannon, were completely blown away by the reveal of the ousted singer. It no doubt was the most shocking unmasking in the show’s history.

This week actor and comedian Joel McHale joins host Nick Cannon and the regular panelists of judges,  Ken Jeong, Jenny McCarthy, Nicole Scherzinger, and Robin Thicke. They’re tasked to break down the clues and guess who the celebrity singers are performing under their masks.

Who knew former Governor Sarah Palin could pull off such a crowd-pleasing performance. So now as the next episode is ready to air, fans are just as excited to see who is behind the remaining five’s masks.

The Masked Singer: Group C Returns To The Stage

Wednesday night the remaining 5 contestants return to The Masked Singer stage. Night Angel, T-Rex, Rhino, Astronaut and Swan will all perform. Fans and judges alike are trying to guess who’s the celebrity behind that mask. Plus, fans have already picked their favorites.

Many The Masked Singer fans feel this is the most talented group of the three. So it’s likely the winner of The Golden Mask might actually be one the five remaining Group C contestants.

Who Will Get UnMasked Next?

Of the 5 remaining The Masked Singer personalities still in the competition, fans are drawn to The Night Angel. Recall The Night Angel was the first to the debut of this group. So this mask set the bar high for the others. It’s obvious The Night Angel is a seasoned professional. The judges’ best guesses for this performer include Taylor Dayne and rapper, Lil Kim. Certainly, all eyes and ears will be on The Night Angel this week. Certainly, this favorite is expected to advance. If not that would spark outrage with the panel and fans alike.

Not to ruffle any feathers, but we wanna hear your #SwanMask hot takes. 🦢 #TheMaskedSinger pic.twitter.com/8csRvV2Iqz

The weakest of the group seems to be The Swan. The feedback is The Swan has the moves but lacks the vocal chops to make it much further. So it’s likely we will see who’s donning that mask soon. Judges are leaning toward The Swan being Sarah Michelle Gellar.

Tune into The Masked Singer Wednesday night at 8 pm on Fox to see if your favorite Group C contestant advances to the group finals.