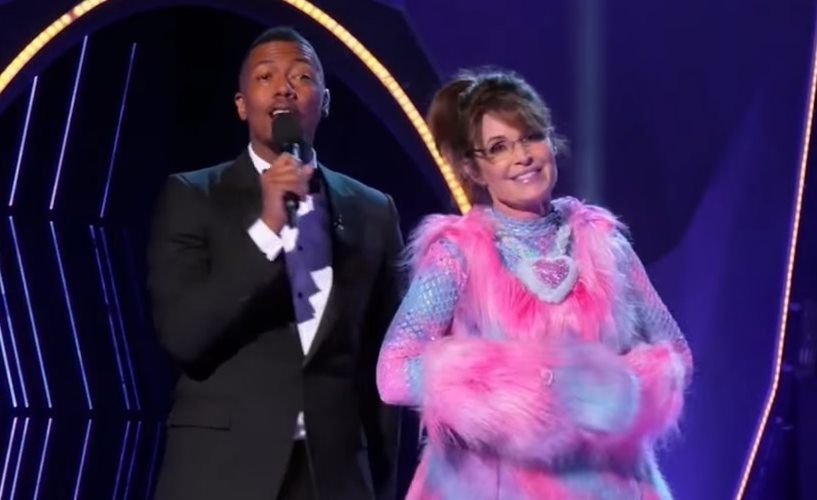 The Masked Singer unmasked probably it’s most shocking reveal last night. Former Alaska Governor and John McCain’s running mate, Sarah Palin shocked fans of Fox’s hit show. And to be honest, shocked the country as well. No one expected the Republican party darling to show such a fun a playful side.

However, Sarah is no stranger to showing fans the real deal. Recall she had a reality show of her own Sarah Pallin’s Alaska on the TLC network in 2010-2011. So now a new generation is seeing the quirky mom of six in a new light.

The Masked Singer: Sarah Palin Is The Bear

Last night on The Masked Singer, Group C was debuted. Astronaut, Bear, Night Angel, Rhino, Swan and T-Rex all performed. However, the crowd just fell in love with The Bear. Sadly The Bear was unmasked and booted off Season 3 after performing “Baby Got Back” by Sir Mix-a-Lot in her psychedelic colored costume. (see video below)

The Bear’s identity stumped all the judges. In fact even The Masked Singer host, Nick Cannon said,” This might be the most shocked I’ve ever been on this show”. Certainly, he was not alone. Last night and still this morning, fans are still chatting about this most unexpected contestant.

The Masked Singer: The Bear’s Clue Packet Was Vague

The Masked Singer’s celebrity panel wasn’t able to figure out who was behind the mask for The Bear. The clue package was vague. Perhaps if Bear advanced the clues would’ve become clearer. Fox hyped this show as the one whose reveal you just had to see to believe — and boy did they deliver.

We were NOT teddy for this. ?

Sarah Palin said her choice of being the bear was easy. Her nickname growing up was bear. Plus let’s not forget the whole momma bear aspect of her life as a mother of six children. Then, of course, there is the connection of bears to her home state of Alaska.

Is Sarah Palin Returning To Public Life This Election Year?

The timing of Sarah Palin’s return to public life coincides with an election year. Sarah has been polarizing in the past. However these days she comes across as unifying and playful. Perhaps with her celebrity on the rise, maybe she’ll be able to draw the younger generation to voters to the polls this fall.