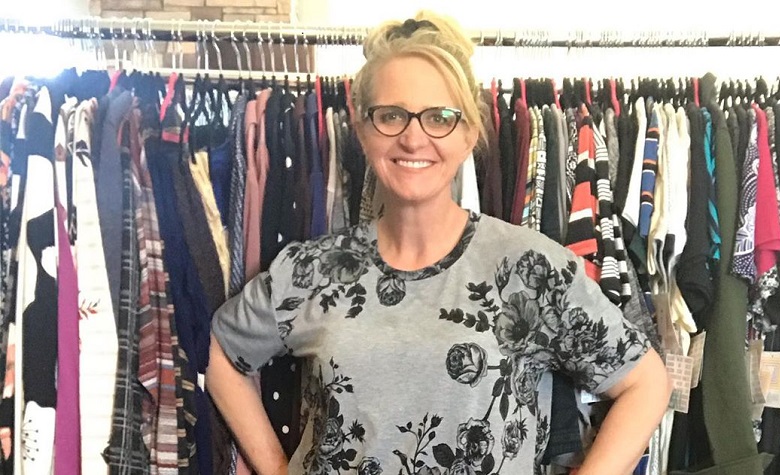 When Christine Brown strikes a pose these days the Sister Wives celeb is usually selling something, like the clothes she has on her back. This Sister Wives star, like her co-wife Meri Brown, both sell the LuLaRoe clothing line.

Christine is showered with compliments for looking so good these days. But the poses hit a cord for some people who don’t offer a critique that sounds like a pretty picture.

Sure, Christine Brown has a lot of followers who will purchase her stuff. There are plenty of women out there who ooh and awe about how wonderful she looks today in her attire. Then there are critics of the Sister Wives entrepreneurs and their choice of clothing to sell.

So far it seems to be a good gig for the two co-wives of Sister Wives. Both Meri and Christine take advantage of their fame for advertising their wares. While it’s not known just how far up the LuLaRoe sales rep ladder Christine achieved so far, it’s safe to say Meri is a rock star for the company.

LuLaRoe’s top sales reps get all kinds of perks including cruising the high seas. The Sister Wives’ original matriarch has been on a few of those adventures over the last few years. So, it sure looks like Meri worked her way to success in the company. 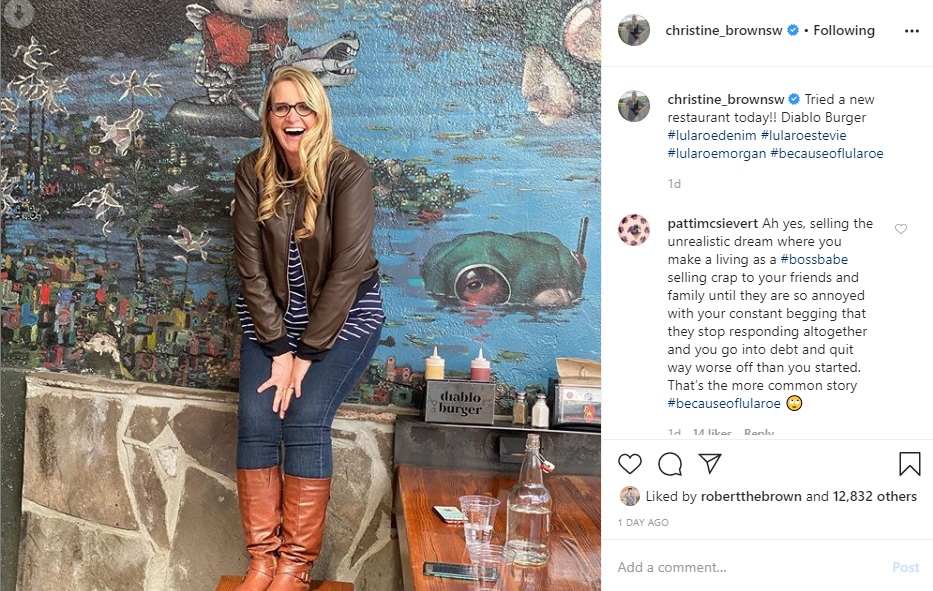 Christine With Ketchup and Mustard

It looks like the third wife of the Sister Wives clan checked out a new restaurant and found herself a colorful wall as a backdrop.  Christine nestles in among the ketchup and mustard for a pose in her LuLaRoe outfit. She also offers the name of what she’s wearing in the post’s hashtags.

She gathered up “Likes” along with several compliments on the way she looks in the photo. But one comment seemed to sum up a rather dark side of what that clothing or selling that clothing means to them.

Christine Brown and Meri Brown seem to recruit people to sell this clothing line. But it sounds like it might not work as well for the average person who doesn’t have hundreds of thousands of followers at their disposal.

Christine Brown is just shy of 300,000 followers on Instagram. Then add that to the followers for her other social media sites. She’s got quite the fan base, or customer base in this case.

?Before Maddie revealed the gender of baby #2, one of the #SisterWives mom's made a surprising confession!

Over the past few years, many comments online report the downside of becoming a sales rep for this brand. Apparently the sales rep buys the clothes before they sell them. That costs a pretty penny out of pocket. That’s especially the case if you find yourself with a bunch of leftover inventory.

One Sister Wives fan summed up their idea of the LuLaRoe experience for Christine in her comment section. They called this the “unrealistic dream”. It sounds as if this person is totally fed up. They share how selling this brand consists of begging friends and family to buy. If you do this enough, they get so fed up with you that they eventually won’t respond to your calls.

The fan calls this scenario a “more common story”. This Sister Wives follower describes how this could put you in debt. Then it leaves you much worse off financially than you were before.

So as nice as Christine might look in her brand of duds, some folks don’t see this as a pretty picture. This comment on Christine’s Instagram is just one of many across the online world today.

So even though Christine looks amazing in many of her outfits and poses, there are some fans out there who just can’t see pretty in the overall picture.

But to be fair, for every success story, there are hundreds of stories in any line of business for people who have failed. LuLaRoe sounds as if it could be like any other business where you take a chance, do the work, and hope for success. Of course, it doesn’t hurt to have hundreds of thousands of followers as a starting point for customers.

Be sure to check out the new episodes of Sister Wives on TLC Sunday nights at 10 pm EST.

Come back to Entertainment Chronicle for all your favorite reality show news.