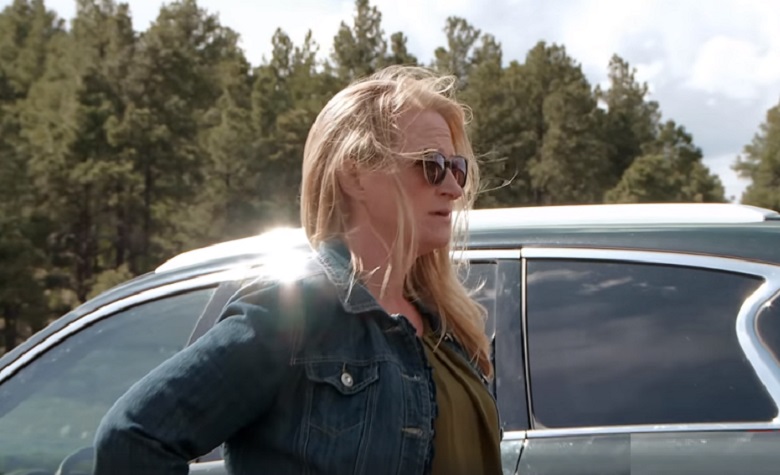 Christine Brown managed to rattle a few Sister Wives fans and at the same time confuse other followers as well with her two latest posts. One of her Sister Wives posts started a mystery online and the other seemed to attract some negative comments.

Those who follow Christine know exactly what she means in one post. That’s only because she talked about this before. As for the other post, it looks like some animal lovers out there offered up their thoughts. Some felt prompted to speak up as they believe they see danger lurking on top of a roof.

Sister Wives Christine Brown Puts Some Fans In a Funk

One of the latest photos this Sister Wives mom put online is of her cat. It seems Zelda likes high places and once again Christine shared a pic of this cat on the roof.  From the view that she captured in the photo, it looks like this kitty is way up high.

It also looks as if the cat is comfortable walking along the edge of the roof. The owner of this Sister Wives cat, Christine, doesn’t appear at all worried about the tight-rope-like pose coming from Zelda.

In fact, she shares with her Sister Wives followers in the caption that Zelda loves to chill on their roof. The comments vary but some don’t seem to be overly thrilled to see the cat up that high.

But one of Christine’s guardian angels out of the Sister Wives audience tells fans to back off on the negative comments. It’s not like Christine Brown put the cat up there and told it to fly. But some fans still see danger with a cat scaling the heights it’s pictured at.

So as Christine gets some negative comments about that cat up on the roof, another post she shared is also stirring controversy. A few days ago on March 4, Christine shared how this date is her favorite day of the year.

But this Sister Wives co-wife neglected to tell her fans just why it means so much. For the Sister Wives veteran fans, solving that mystery comes easy. But that’s only because she has shared this before.

Which wife gets which piece of land? Disagreements and misunderstandings over the Flagstaff plots push the Browns to the breaking point. See what unfolds tonight at 10/9c on #SisterWives.

Sister Wives: Why Favorite Day of the Year?

It’s not so much a favorite day as it is a favorite date to say out loud for Christine Brown. She shared a little diddy about this in the past when March 4 came around.

Some believe Christine likes the date because it’s a date that signifies working toward your dreams. That would fit as there’s a lot of work ahead of the family for realizing their dreams.

But there’s another reason she likes this date. By shouting out March 4, Christine can let loose a command. So maybe this is the reason it’s her favorite day as well. It seems she did mention something about this last year.

So it looks like the third wife of the Sister Wives family likes to shout out that date like a command. Pretty much as the military would do. They tell the troops to march forth. With all the kids in the family, it’s sure to come in handy when calling her children for dinner.

So now that the confusion about the date is over and the cat on the roof is just that – a cat on the roof. So, fans can rest easy. That is until the mayhem starts up again on Sister Wives when a new episode rolls out Sunday night on TLC at 10 pm EST.