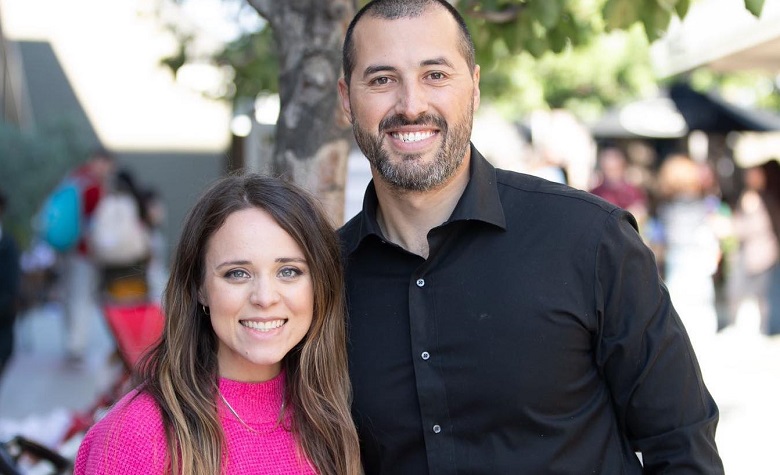 Counting On star Jinger Duggar has been keeping in touch with the fans lately. Most of the time, Jinger shares her adventures around Los Angeles with Jeremy Vuolo. However, Jinger and Jeremy weren’t able to make their Thanksgiving as exciting as fans expected. Apparently, the two suffered flu and had to stay at home for the holiday. Fortunately, family and friends of Jinger sent them food for Thanksgiving. Now, Jinger is back to share another update for the fans about their health, surprising fans with a grown-up picture of her daughters, Evangeline and Felicity.

In a social media post, Counting On star Jinger Duggar surprised the fans with a grown-up picture of Evangeline and Felicity. The two are back-facing in the photo again. However, it’s noticeable how much they’ve grown in just a short amount of time. Jinger shared a quick update regarding their health after having flu on Thanksgiving. “So thankful we are feeling better today. Abandoning chicken noodle soup for some homemade pizzzzza,” Jinger said. It’s clear to see that Jinger is still keeping things private when it comes to her kids. At the same time, fans are glad that she’s still sharing glimpses of her daughters.

Jinger Loving Her Own Coffee Blend

Counting On star Jinger Duggar also took to social media to share a clip of herself having her own coffee blend while watching a football game with Jeremy Vuolo. It’s clear to see that Jigner loves the blend that she made with Matchbox Coffee. Fans have praised Jinger for being adventurous and trying out different things to make income and enjoy her life to the fullest. Aside from her own coffee blend, Jinger also did well with her latest book, Becoming Free Indeed.

Counting On: Jinger Duggar Praised For Supporting A Non-Profit Organization

The Counting On star also revealed that she’s supporting a non-profit organization that seeks to enrich the lives of children whose parents have a history of incarceration. Jinger and Jeremy Vuolo even had a discussion with one of the leaders of the organization, which they shared information about on social media. Fans took to Jinger’s comment section to praise her and Jeremy’s efforts. “You guys are seriously the most inspirational couple,” one fan said. “I think you both are so amazing!! Thank you for all you do for others!!” another fan added.

It’s clear to see that Jinger and Jeremy are successful. Fans have been praising the big changes in Jinger’s lifestyle since moving to Los Angeles with Jeremy.