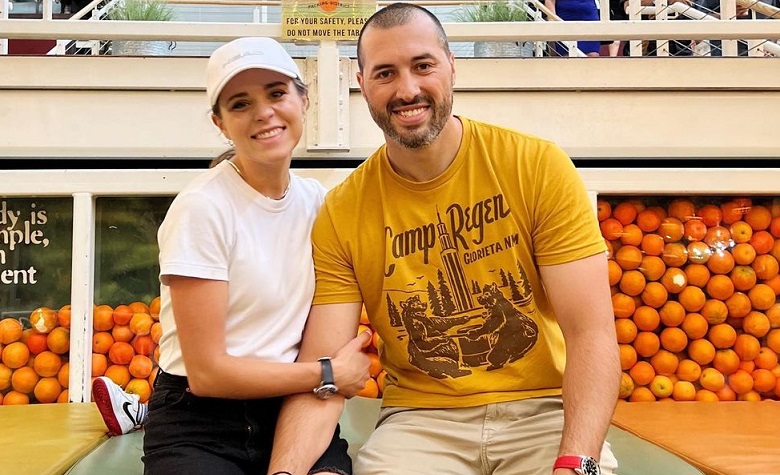 Counting On star Jinger Duggar loves to share exciting updates about her family in Los Angeles. She often shares photos of her latest adventures with Jeremy Vuolo and their kids, Evangeline and Felicity. While they still haven’t revealed their children’s faces, Jinger is back to share another update. This time, Jinger shows off one of Felicity’s skills that she may have learned from her parents.

In a social media post, Counting On star Jinger Duggar shared a picture with Jeremy Vuolo during their recent outdoor trip with the kids. “Sunday afternoon in DTLA with my baby and our girls,” Jinger said.

Moments later, fans quickly noticed the lower angle of Jinger and Jeremy’s photo. Due to this, fans assumed one of Jinger’s daughters took the photo. Jinger later interacted with some of the fans in her comment section and confirmed that Felicity took the photo.

According to some, Felicity took an incredible shot. Some also think Felicity got her skills from her mother and father, who both love to take stunning pictures.

Counting On star Jinger Duggar also shared a hilarious picture of her, which was also taken by Felicity. Apparently, Felicity took a stolen shot of Jinger talking to Jeremy Vuolo during their road trip.

Fans think Jinger is giving her kids a life much different than what she used to have back in Arkansas. Most of the time, Jinger goes out shopping and watches sports games with her family.

Counting On: Jinger Duggar Continue To Succeed With Cooking Show

Outside of family life, Counting On star Jinger Duggar has been successful with her recent YouTube cooking show. Jinger has already released 3 recipe videos so far, and most of them have gotten tons of praise from the fans.

One of Jinger’s recent videos was about her Mexican Chicken Tacos. Apparently, Jinger took inspiration from her 2 years of living on the borderline of Mexico. Meanwhile, fans can expect more recipe videos in the coming weeks due to the growing number of Jinger’s supporters.

Jinger has been one of the most successful daughters of Jim Bob Duggar and Michelle Duggar. Fans also think everything changed in her life since moving to Los Angeles with Jeremy Vuolo. To stay up to date with Jinger and the rest of the Duggar family, keep coming back to Entertainment Chronicle.