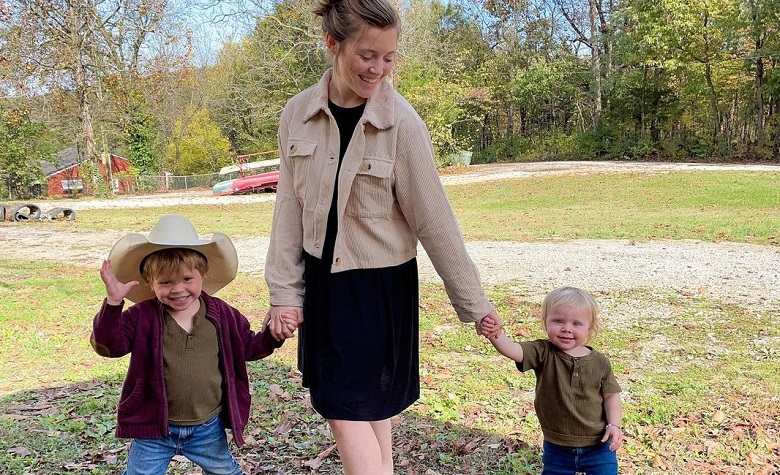 Counting On star Joy-Anna Duggar has been keeping in touch with the fans lately. Most of the time, Joy-Anna shares adorable pictures with her kids. She also took social media recently to share Gideon and Evelyn’s adorable reunion with their father, Austin Forsyth, after their quick vacation in Tennessee. Now, Joy-Anna is back to share another fun update. This time, Joy-Anna shares Gideon and Evelyn’s playtime in their mud house.

In a social media post, Counting On star Joy-Anna Duggar shared a clip from Gideon and Evelyn’s recent playtime. Apparently, Joy-Anna and Austin Forsyth built a mini house for their children. It also appears that Gideon loved it so much that he did a quick tour while Evelyn kept herself busy playing with rocks and mud. Fans are also praising Joy-Anna for making her kids enjoy the outside world instead of just giving them gadgets.

Joy-Anna has been silent regarding the rumors about her possible pregnancy. The speculations started when Joy-Anna suddenly became inactive on social media. Since then, fans have been trying to find evidence, especially when one of her friends or siblings shared a picture with her. However, it seems that Joy-Anna’s recent return to social media finally ended all the speculations. She even shared a close-up picture of her having no signs of pregnancy.

At this point, Counting On star Abbie Duggar is the only confirmed pregnant Duggar. It’s still unclear if Abbie is the only one who is expecting or if there are more. However, there are rumors stating that Lauren Duggar is also expecting. There are actually speculations that she has already given birth, and wants to keep things private by leaving social media for good. Meanwhile, Jim Bob and Michelle Duggar have yet to acknowledge some of their newborn grandkids. One of which is Jill Duggar’s son, Frederick. According to some, it’s possible that Jim Bob and Michelle are also avoiding the public after all the controversies that Josh Duggar’s CSAM arrest brought to the family.

It’s clear to see that a lot of things are changing in the Duggars since Josh’s conviction and it is probably for the best in the long run. Fans also believe that most adults no longer follow their old traditions. Again, probably for the best and about time. Now, what do you think of Gideon and Evelyn’s little mudhouse? Is it great that they are little outdoor explorers? Furthermore, do you think Joy-Anna may be expecting? Let us know in the comments below.