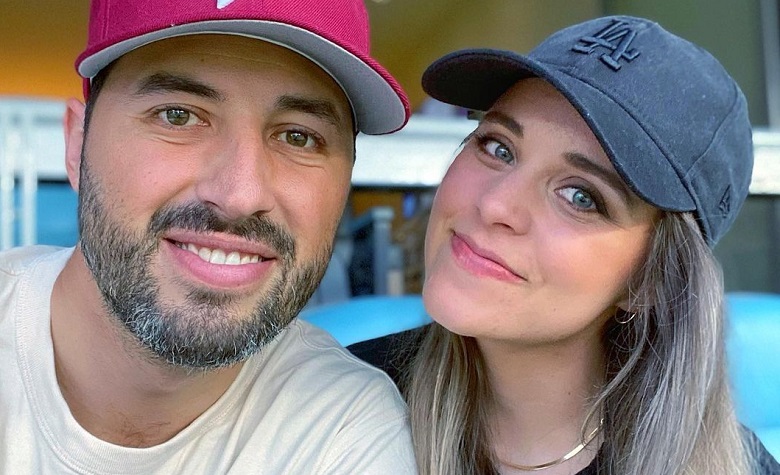 Counting On star Jinger Duggar has been keeping in touch with the fans lately. Apparently, Jinger has been busy with her latest vlogging project with her husband, Jeremy Vuolo. The two have already released two episodes, and fans have been asking for more. Aside from vlogging, fans also noticed that Jinger and Jeremy are becoming more transparent when it comes to their kids lately. Jinger even took to social media recently to share a rare glimpse of her daughter, Felicity, with a trendy pair of shoes.

In a social media post, Counting On star Jinger Duggar shared a picture of Jeremy Vuolo with their daughter, Felicity. According to some, it seems that Jinger and Jeremy are starting to share more pictures of their daughters lately. Despite facing backward most of the time, fans are still glad that Jinger is still giving updates about her kids from time to time. Fans also noticed that Felicity is looking stylish in the picture. Some also think that Felicity has already adapted to her parents’ ways of clothing, which is way more modern compared to the Duggars back in Arkansas.

Counting On fans also think that Jinger Duggar is no longer following the Duggar family’s beliefs, especially when it comes to her ways of clothing. Apparently, Jinger has been sharing pictures of her wearing pants and shorts. It also appears that Jinger has already caught up with the real world since moving to Los Angeles.

According to some, it’s clear that most of the Duggar kids were raised in the same old system where they never get to experience living a modern lifestyle. However, despite the changes in Jinger’s life, the Duggars are still in touch with her, showing that she still has the family’s support no matter what she does.

Counting On: What’s Next For Jinger Duggar & Jeremy Vuolo?

At this point, Counting On stars Jinger Duggar and Jeremy Vuolo have yet to share their next big step after their latest vlogging project. However, fans think that the two might also get back into writing books. Some are also hoping that Jinger and Jeremy will finally return to their podcasts. It’s unclear if they still plan to have another child. But fans think that the two are now focusing more on enjoying their marriage with their two daughters.

Jinger’s last vlog was about their trip to a shoe surgeon. Meanwhile, fans are hoping that the next episode will take a deeper dive into Jinger’s family.