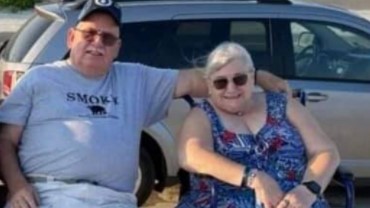 If you live in the midwest, you might already be familiar with the case of the missing Barker family. Over a week ago, Ronnie and Beverly Barker left their home in Indianapolis in their RV. They were on their way to Tucson, Arizona to visit friends.

However, they never reached their destination.

Loved ones launched a search for the couple and it ended in heartbreak. Keep reading to find out more about the Barkers and what we currently know about their disappearance.

Fortunately, the search party found Beverly Barker alive. She’s now seeking medical treatment in the hospital. But her husband Ronnie wasn’t so lucky. But what exactly happened to Ronnie Barker?

According to Indianapolis news outlet Fox 59, the Barkers left departed from a campground in California on March 27. They set off across the Nevada desert when they disappeared. They were supposed to reach Tucson by the 29th, but that didn’t happen. Friends and family members desperately tried to reach them, to no avail.

“If they saw I had called, they would have called me back,” said the Barkers’ daughter.

Authorities did issue a Silver Alert, but not until April 4 — more than a week since their disappearance. Needless to say, the inaction really frustrated the family.

“The reason they weren’t going to give a Silver Alert is that they aren’t residents of Nevada. That, to me, is insane. What does that have to do with anything? They’re missing in your state. So… it’s frustrating,” said another daughter.

Many people following the case believe there might have been a happier ending for the Barkers had the alert gone out sooner. And now, Ronnie Barker is deceased and Beverley Barker’s life hangs in the balance.

The rescue didn’t provide many answers

According to Las Vegas station KLAS, the Barkers left their RV in a small, rural part of Nevada. Ronnie and Beverly were nowhere to be found when the search party found the RV.

Unfortunately, there aren’t many details available about the rescue at this time. We do know that the search party found Ronnie Barker deceased. At this time, there is no further information available about his death.

Mineral County Undersheriff Bill Ferguson reported that they found the Barkers with their car on April 5. They were up in the mountains about two miles from the abandoned RV.

“It was just one bad decision after another,” Ferguson said. “I’m not sure what took them off course. They got the motor home stuck and then unfortunately they got the car stuck.”

Ferguson went on to say that Beverly Barker melted snow for water to survive. But colder temperatures probably made the situation unbearable overnight.

Keep following us online for more on this case. We’ll give you the details as soon as we know any more.