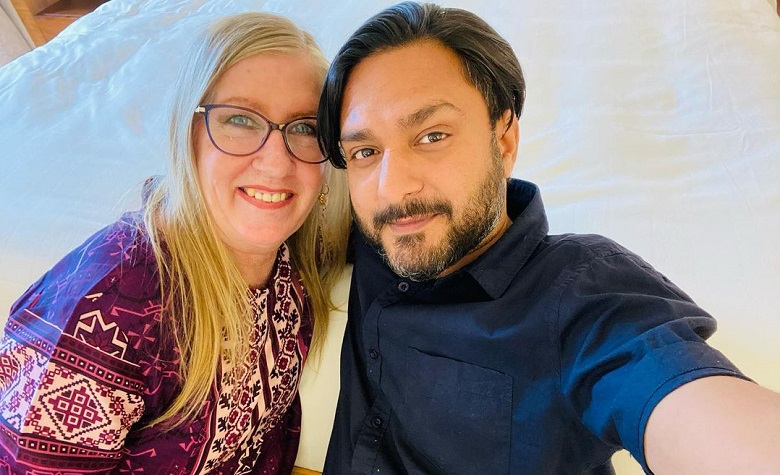 90 Day Fiance stars Jenny Slatten and Sumit Singh have been sharing their sweet time together on social media lately. Fans are also impressed by how the two stayed strong despite all the criticisms being thrown at them. Apparently, Jenny and Sumit are often judged due to their huge age gap. However, it didn’t stop them from proving how much they love each other. Now, Sumit and Jenny are back on social media to interact with the fans. However, this time, they’re celebrating a huge milestone and they thanked all of their supporters for making it happen.

In a social media post, 90 Day Fiance star Jenny Slatten shared a sweet message for the fans as they celebrate a new social media milestone. Apparently, Jenny and Sumit Singh’s joint Instagram account has reached 200K followers. “Thank you all so much all of you for loving and supporting us and our relationship. Your love and support also gives us strength,” Jenny said. Sumit and Jenny have been a fan-favorite couple for a long time. The two have been proving that age doesn’t matter in a relationship. However, fans think that the two are being tested once again in the upcoming season of The Other Way.

The Drama Continues In The Upcoming Season Of The Other Way

90 Day Fiance fans are getting worried about the future of Sumit Singh and Jenny Slatten. Apparently, TLC previously released a trailer for the third season of The Other Way, and it teased a worrying scene between Sumit and Jenny. During the trailer, Jenny went emotional and walked out from the cameras during her heated argument with Sumit. The two were arguing about their marriage, which has been their problem for a long time. According to Jenny, she doesn’t want to go back and forth from the U.S. to India just for Sumit to delay their wedding. Apparently, fans have been speculating that Sumit has been making ways to stall their wedding. However, some think that it’s just part of their antics to make their storyline more interesting.

90 Day Fiance stars Sumit Singh and Jenny Slatten have been sharing sweet pictures of them on social media. Recently, Jenny shared a heartfelt message for Sumit. “If I know what love is, it is because of you,” Jenny said. Moments later, fans took the couple’s comment section to ask when will they get married. “Are u guys married yet?” one fan asked. After that, Jenny replied that seems to hint that their wedding might be coming in the next season. “Stay tuned! New season starts from 29th of august,” Jenny said. At this point, the wedding of Sumit and Jenny has been one of the most highly-anticipated weddings in TLC. They’ve been through ups and downs in their relationship. However, fans think that the two are so in love and a wedding is highly possible next season.

‘Counting On’: Jill Duggar Shares How She Celebrated Her Birthday
‘Counting On’ Amy Duggar Calls Out The Duggars For Being ‘Delusional’
‘The Sadness’: Movie Review And Rating
‘Sister Wives’: Why Do The Browns Keep Struggling In Flagstaff?
‘Sister Wives’: Janelle Sparks Split Rumors With Kody For THIS Reason