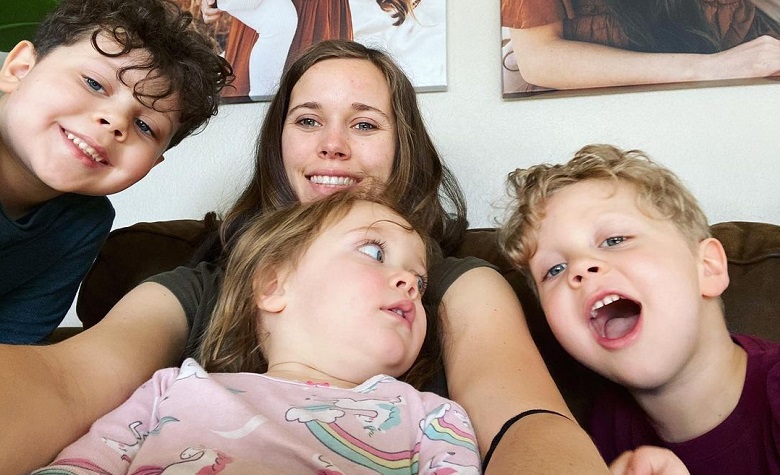 Counting On star Jessa Duggar loves to share wholesome updates about her family. Jessa recently went headlines after sharing her incredible way of celebrating her daughter Ivy’s 2nd birthday for a week. Now, Jessa is back at it again with her sweet posts about her kids. Apparently, Jessa shared a picture from the afternoon playtime of her kids. Fans are also impressed by how the kids are being creative in a simple way. Meanwhile, fans are getting more curious about the current status of Jessa’s pregnancy.

Counting On: Jessa Duggar Shares Wholesome Playtime Of Her Kids

In a social media post, Counting On star Jessa Duggar shared pictures from the afternoon playtime of her kids, Ivy, Henry, and Spurgeon. “The best kind of afternoon,” Jessa captioned. The picture shows Jessa’s three kids fitting themselves in one box. Despite being too tight, the kids showed big smiles, showing that they love what they’re doing. After that, fans took Jessa’s comment section to share how impressed they are by how Jessa’s kids enjoy simple things. “LOVE to see this! It’s rare nowadays to see kids being creative with all the SIMPLE things,” one fan said.

Apparently, a lot of kids today prefer to play with gaming devices instead of playing outside and doing physical activities. This is one of the main reasons why fans are impressed by Jessa’s parenting as she’s able to make her kids enjoy their lives without the use of technology. “I’ve been a fan of your family for a very long time. Thank you for being true role models,” another fan added.

Counting On star Jessa Duggar previously went headlines after sharing their one-week celebration of Ivy’s 2nd birthday. Apparently, Jessa gave presents to Ivy each day for a week up until her birthday. Meanwhile, Ivy continues to impress the fans with her vocabulary at a very young age. At one point, Jessa shared a clip of Ivy saying that she’s now a grown-up after turning 2-years-old. Jessa also loves to share clips of Ivy randomly singing.

Counting On fans took Jessa Duggar’s recent social media post about her kids’ playtime to ask about her pregnancy. Apparently, it’s been quite some time since fans last heard an update about Jessa’s pregnancy. “How is your pregnancy this time?” one fan asked. “No baby yet? I’m anxiously awaiting the announcement!” another fan added. At this point, Jessa has yet to share updates about her pregnancy. She barely shows herself in her recent social media posts as well. However, some fans believe that it’s only a matter of time before Jessa finally shares an update.