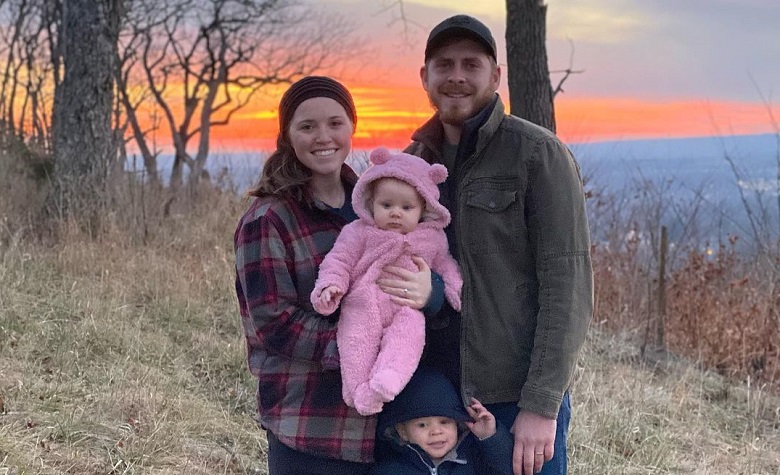 Counting On star Joy-Anna Duggar has been making headlines after seemingly making peace with her rebellious sister, Jill Duggar. Apparently, Joy-Anna shared a throwback photo of her siblings including Jill. Since then, fans think that they’re finally heading towards peace. Now, it appears that Joy-Anna wants to focus more on positivities. She recently shared a picture of her daughter, Evelyn. Fans are also amazed at how Evelyn grew in a short amount of time. Joy-Anna is also praised for her amazing parenting despite admitting her struggles.

In a social media post, Counting On star, Joy-Anna Duggar shared a picture of her daughter Evelyn. She can be seen wearing an amazing outfit while crawling on the carpet. Fans were also left in awe of Evelyn’s big smile. “Hello, princess!”, Joy-Anna captioned. Meanwhile, fans took Joy-Anna’s comment section to express their amazement at how big Evelyn has grown in a short amount of time. “She’s definitely a cutie. And she’s getting so big”, one fan commented. Carlin Bates also commented, “She is getting so big.”

Apparently, Jill has been posting pictures of her kids recently. It appears that she’s now focusing more on her parenting after admitting that she’s having a hard time learning patience as a parent. There are also rumors stating that she’s pregnant after fans noticed her swollen face in her recent picture. However, Joy-Anna has yet to confirm the rumors.

Joy-Anna Is Heading Towards Peace Over Her Rebellious Sister Jill

Counting On star Joy-Anna Duggar recently made headlines after sharing a throwback picture of her and her sister, Jill Duggar. Apparently, the siblings are not on good terms for quite some time due to Jill’s rebellious acts towards the family. However, fans think that they made peace after Jill attended her brother Justin Duggar’s wedding. Joy-Anna also unliked a post criticizing her sister Jill, which could be a sign that they finally reconciled. Fans are also happy that the siblings are finally getting close. Apparently, there are speculations that TLC will release a new season for Counting On very soon, and seeing the kids at peace would be a great start.

Counting On star Joy-Anna Duggar has been criticized a lot due to her parenting. Apparently, Joy-Anna has put her kids’ lives in danger multiple times. At one point, she lets her baby daughter Evelyn play in the rocks. Fans slammed Joy-Anna for her irresponsible act as Evelyn could eat small rocks. “Why on earth is a baby sitting on rocks?”, one fan commented. Joy-Anna was also called out after bringing Evelyn to a mall without a mask amid the spiking cases of COVID-19 in Arkansas. However, despite all the struggles, Joy-Anna admits that she’s trying her best to become the best parent to her kids as much as possible.