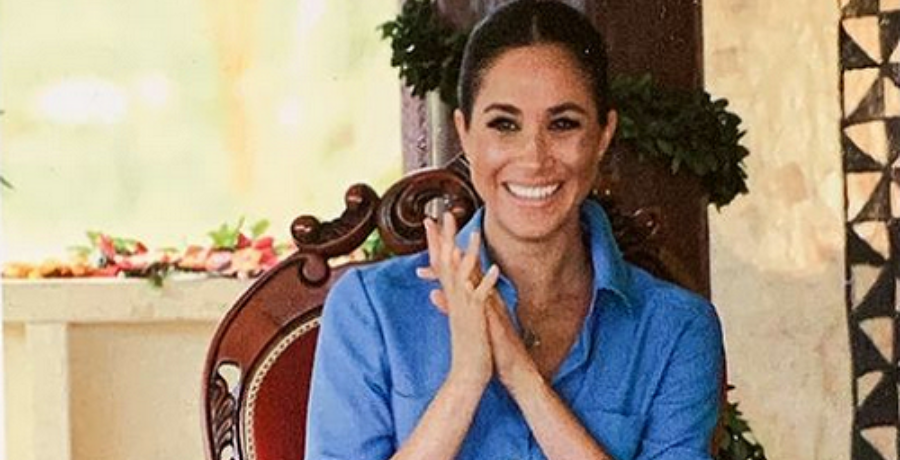 Meghan Markle and Prince Harry used a heartwarming photo for their thank you card. The couple has maintained a low profile since moving to the United States. Plus, they can’t really do anything due to the ongoing coronavirus pandemic. Since they stepped down from their senior royal duties, fans couldn’t get regular photos of the Sussexes.

But fans were able to get a new photo of Meghan and Harry. In fact, it was an illustration of the family with baby Archie and their two dogs. The Duke and Duchess of Sussex have since followed up with new thank you cards that were sent out after the holiday season. Check out the photo inspiration for this adorable card.

According to Z100 New York, a new photo surfaced of Meghan Markle and Prince Harry. Their thank you card included a photo of the couple during their 2018 tour of Australia, Fiji, New Zealand, and Tonga. The photo shows an intimate moment between the two. Meghan protected Harry from the rain with an umbrella as he spoke in Dubbo, Australia.

In the charming photo, Harry wore a gray button-down shirt with black pants. He also had a huge smile on his face. Meghan also looked happy as she held the umbrella for her husband. She wore a gray blazer over a white button-down shirt. Her long brunette hair was pulled back in a low ponytail.

The Gert’s Replies Instagram account confirmed that Clarence House will still handle the couple’s mail. One user noted that decision is “strange” since they left the British Royal Family last year. Harry and Meghan said they wanted to live their lives financially independent. Some think that this rare photo will just encourage the public to ask for more recent photos.

Even though the photo isn’t new, royal fans will love this sweet moment between Harry and Meghan. The two were only newlyweds at the time. The note included with the thank you card read: “Thank you for your thoughtful message. We appreciate your kind words and the time you have taken to write us on this special occasion. Sending you our warmest wishes.”

Prince Harry and Meghan Markle currently live in Montecito, California with their son. While they have no plans to return to the royal family, they are still attending Queen Elizabeth’s birthday celebration in London this spring. The former Suits star may have settled down in Santa Barbara, but she still checks in on her former royal projects. One of them includes the animal charity Mayhew.

“Whenever we talk to the Duchess about the charity, she always references how important her dogs are and what a support they are, particularly during everything that’s happened this year, with COVID, and with the personal trials and tribulations she went through this year.”

Mayhew’s goal is to encourage people to see what a “great source of comfort” that animals can be. That same animal charity Meghan and Prince Harry’s Christmas card in December 2020 on their social media accounts. Caroline told Hello! Magazine that the charity was “really thrilled” to be selected as the Sussexes’ 2020 Christmas card. Last year, the Duchess renewed the sponsorship of a dog kennel at Mayhew in Archie’s name.

Are you happy to see this new photo from the former royals? Let us know in the comment section below. Make sure to check back with Entertainmnet Chronicle for more royal news.