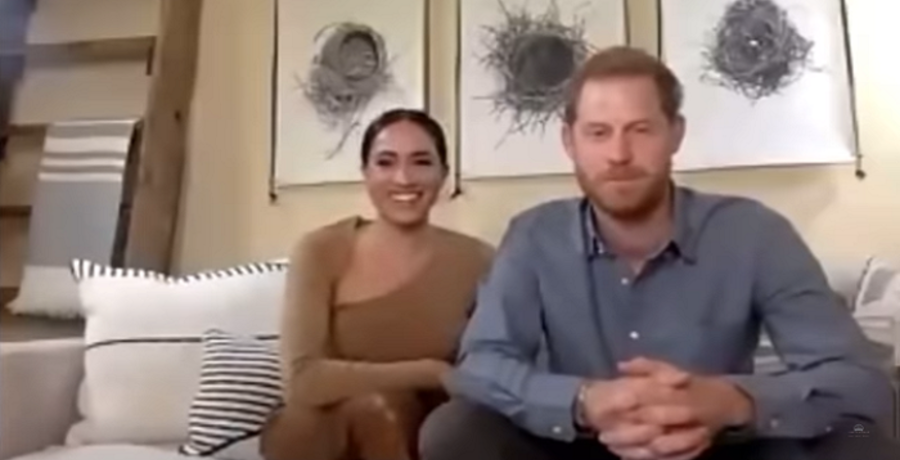 Prince Harry and Meghan Markle made a strong declaration with their new podcast. The couple said that “love wins.” Their podcast is part of a multi-year deal with Spotify. They hope that it will bring “warm, a smile and something to think about” during this difficult year.

In the first episode, the Duke and Duchess of Sussex reflected back on the year. They addressed the ongoing COVID-19 pandemic. First, they thanked the “health care workers and front care workers for their sacrifices.” Then, they played a greeting from Elton John, who’s quarantining with his family. However, the artists and celebrities who appear on the podcast will submit audio diaries instead of appearing over Zoom.

Per CNN, celebrity guests include Brené Brown, Deepak Chopra, James Cordon, José Andrés, Naomi Osaka, Stacey Abrams, and Tyler Perry. Meghan Markle and Prince Harry also hinted about their reported rift with the royal family. They declared that “love wins,” no matter what’s happening in the world. As fans know, the Sussexes also had a crazy year since stepping down from their senior royal duties.

“From us, I’ll say no matter what life throws at you guys, trust us when we say, love wins,” Meghan said.

Harry and Meghan wanted to launch a podcast because they want “to honor the compassion and kindness that has helped so many people get through it.”

“Our thoughts have been with you, especially during this holiday season,” Meghan explained.

It’s just one of the many podcasts that the couple plans to release in 2021. Earlier this month, Spotify announced its multi-project deal with Archewell Audio, the couple’s podcast production company.

During the first episode, Harry called 2020 “a year we could have never imagined.” He also talked about the lessons learned in the past year, saying, “As we come to the end of this year and look to the future, let’s hold onto the lessons we’ve learned about how important it is to take care of one another, and how meaningful our connections are, even when they’re physically impossible.”

At the end of the first episode, the couple’s 1-year-old son, Archie, makes an appearance. Meghan Markle asks him, “Archie, is it fun?”

“Fun,” Archie repeats back. Then he wishes the listeners a “Happy New Year.”

Prince Harry and Meghan also played, “This Little Light of Mine,” the song they played at “the very end of our wedding.” It’s an intimate glimpse into their lives. Even royal fans have never gotten this close to any members of the royal family before. But it’s still focused on their celebrity guests.

“We were curious to hear what they’d reflect on when they had a moment to themselves … without navigating the sometimes awkward dance of a video chat,” Harry said. “Meaning, no one having to say ‘you’re on mute’ over and over again – which is probably one of the defining phrases of 2020.”

What are your thoughts on Meghan and Harry’s podcast? Are you going to give it a listen? Sound off below in the comments.