A little less than two weeks ago, Wentworth Miller made a personal reflection on Instagram. In his personal reflection, he discussed the individuals who lurk on his page because they want Prison Break Season 6 updates. At the time, Wentworth insisted Prison Break fans would be better off unfollowing him. They should follow his co-star Dominic Purcell, Disney, or Fox.

“Some of you are here for teases about PB S6. I suggest you head over to @disney @foxtv and @dominicpurcell. If anyone can move the needle, it’s them. I’ve got nothing to do with it,” he explained on his lengthy Instagram post.

At the time, it didn’t sound like Wentworth was shutting down the possibility of a Prison Break Season 6. Just that there were not currently any plans for it. And, that he knew nothing about it. Nor, would he be the first to know. But, it did sound like he was sick of people pestering him for information. Information he did not have.

Now, in the last two weeks something changed. Shifted inside of him. Wentworth Miller took to Instagram again. And, this time? Well, this time he announced he was no longer interested in doing anymore Prison Break. So, if Fox decided to bring back Prison Break for Season 6… He would not be a part of it.

Why doesn’t Wentworth Miller want to be part of Prison Break?

Unfortunately, Wentworth Miller isn’t interested in playing Michael anymore. Why? Well, it is hard for fans to be too mad at him for his reason why. He’s decided to embrace his sexual identity. He doesn’t want to play a character in a movie or TV series unless that character isn’t straight.

Not bec of static on social media (although that has centered the issue). I just don’t want to play straight characters. Their stories have been told (and told).

So. No more Michael. If you were a fan of the show, hoping for additional seasons… I understand this is disappointing. I’m sorry.

It would be unrealistic for the network to rework the character to be homosexual. So, this is one role we won’t be seeing Wentworth Miller stepping into anymore.

Could the series go on without him?

Unfortunately, this is a pretty difficult question to answer. Would fans Prison Break Season 6 without him? Well, Fox would certainly have to explain a reason why he wasn’t part of the series. That being said, the production team could fast forward to when Michael’s son is older. Perhaps his son follows in his footsteps and is just as smart as daddy? Maybe we get to see his son break out of prison instead? Fans could probably get behind this notion.

It won’t be long.

One thing we do know is that Dominic Purcell has always been onboard for another season. So, even if Wentworth is out… Dominic would be in. According to Tv Shows Ace, fans believe Sarah Wayne Callies would be onboard for Prison Break Season 6. She’s never responded to the question. But, she frequently posts Prison Break content. Which puts her somewhere between Wentworth’s disdain for the series and Dominic’s excitement.

What do fans think about his exit?

Surprisingly, Wentworth Miller left his comments on. So, the post confirming his departure from Prison Break got flooded with 25,000 comments. Unsurprisingly, this was pretty upsetting news for fans of the Fox series.

Dominic Purcell left a supportive comment on the post. A comment that accumulated over 27,000 likes. Here’s what he had to say: “It was fun mate. What a ride it was. Fully support and understand your reasoning. Glad you have made this decision for you health and your truth. Keep the posts coming. …. love ya brother. ❤️❤️❤️❤️”

Prison Break fans flooded Wentworth’s comments. They flooded with support and love. Sure, they found the news sad. But, they were also happy. Happy he was choosing his own personal and mental health.

One individual penned in a very long comment: “I completely respect your decision, not to mention the fact that I both understand and empathise with it, too. Your focus on speaking your truth is a huge inspiration to me and (I judge) to so many others too. Please, keep doing that. You’ll always have my support (not that you need the gratification, but I want you to know it’s there, anyway).” 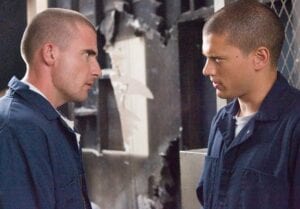 “I think you made the right decision. Straight characters have a narrated story. I can understand your decision that you don’t want to do this anymore and I will always love and support you no matter what happens,” a second chimed in.

There was one individual who didn’t like what Wentworth’s announcement meant for Prison Break Season 6. But, this was exactly the type of individual Wentworth believed shouldn’t be following his page anymore.

So, do you think Prison Break Season 6 could still happen? Or, do you think Wentworth Miller backing out pulled the plug on the possibility? Share your thoughts in the comments.

‘Counting On’: Amy Duggar Calls Out Anna For This Reason
‘Sister Wives’: Would Christine Stay If Robyn Was Never In The Family?
‘The Sadness’: Movie Review And Rating
‘Counting On’: How Does Josh’s Conviction Affect The Duggars?
‘Counting On’: Why Didn’t Jim Bob Write A Letter For Josh?