90 Day Fiance star Paul Staehle’s latest message comes directly from his hospital bed for even more drama following Karine Martins calling the cops. This controversial 90 Day Fiance celeb has left a whirlwind of confusion and accusations in his wake over the last few days.

For even more added drama Paul offers a message from his hospital bed. He went to the hospital apparently after pain brought him to a local emergency room. The 90 Day Fiance husband and soon-to-be-father of two already dropped a duo of bombshells over the past few days. Now he offers a third.

Karine Martins called the police on Paul Staehle as the two battled over custody of Pierre. Karine wanted to leave but Paul would not let her take Pierre.

Apparently this started when he found text messages Karine sent to a divorce lawyer in Brazil, her country of origin. He accuses his 90 Day Fiance wife of wanting info from this lawyer regarding child support payments.

When the argument escalated, it seems Karine called the police because he wouldn’t let her leave. Then things got messy. Police were called twice but both times Paul and Karine were told this was a custody case for the courts and they couldn’t get involved.

During the first visit from local law enforcement, Paul told the cops that Karine had an open Child Protective Services case. This was Paul’s first bombshell reveal about Karine Martins.

This started on Thursday afternoon and it carried on into Friday. When the police came on Thursday Paul left his cell phone video camera going so this could entertain his fans. But fans weren’t entertained. Instead, they were appalled and worried about baby Pierre.

Paul continued online and he dropped another nasty accusation about his 90 Day Fiance expectant wife. In what appeared like a desperate attempt to gain the 90 Day Fiance followers support, he said his wife had gone out with Pierre and stopped by a guy’s house.

He claims his pregnant wife drank beer and then slept with this man with Pierre right there. Bombshell number two came later, he claimed the baby Karine is carrying is not his. He has posted a picture of Karine and a man claiming it was in fact her boyfriend.

Paul Staehle hasn’t let any of this die down. It looks like he still continues on with this twisted journey. Something transpired that found Paul making his way to the local emergency room. Paul once again live-streamed his fans. This time from his hospital bed. 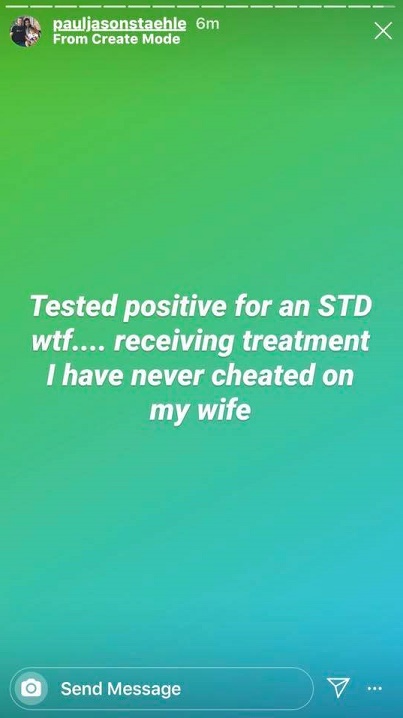 Then Paul dropped the message above to his 90 Day Fiance followers. This is the third bombshell Paul shared about Karine. Some fans think he’s possibly on a mission to destroy her reputation or maybe he just can’t help himself airing the dirty laundry of the family.

This is a mess and from what the fans online say today, their hearts go out to little Pierre. While the little guy won’t be old enough to sit in front of a computer for several years when he does he’ll possibly see his family’s history.

The things his father says about his mother are just nasty. Paul’s mother warned him. You can hear her talking on the video that he took during his visit from the cops. She told him these things are private. Well, not anymore.