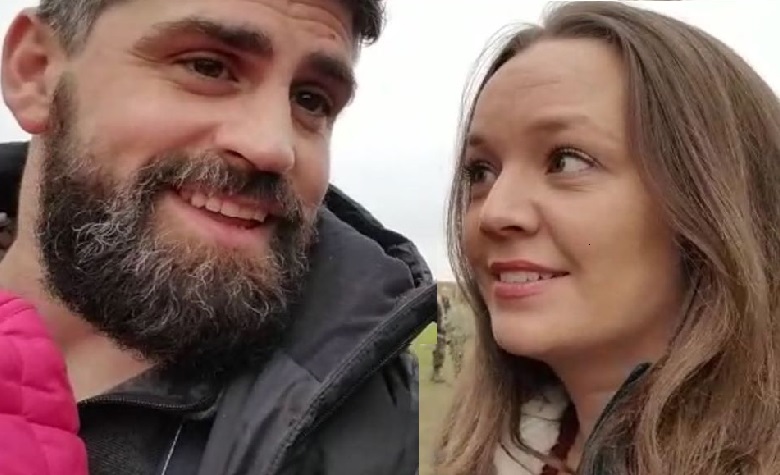 90 Day Fiance stars Rachel Bear Walters and Jon Walters continue with their series and this week Rachel is really hot on-screen in more ways than one. She mentions a few times how she’s so hot that she’s burning up.

So, Rachel talks from her home in the US, and Jon comes to the fans from England but the two are together onscreen thanks to technology.

That’s because this 90 Day Fiance celeb is in New Mexico and the weather forecast describes scorching heat. But as they get into their Shoot the Breeze episode, they talk about their compatibility in the bedroom.

This is the fourth Shoot the Breeze segment and the topic is astrology. So far this 90 Day Fiance couple covered topics that included, ghosts, UFOs, using animals for testing, and now, astrology. And yes, Jon and Rachel Walters make astrology interesting as they use it to describe themselves and their life together.

Rachel sees uncanny correctness in what astrology says about a person. Jon, on the other hand, thinks it’s a broad list of assets that fit many people born under the same sign or not. He can’t fathom the idea that everyone born under a certain horoscope sign will all have the same personality.

But as they talk during these live segments, life goes on around them – like adorable Lucy calling from the bathroom. She’s done poop, Rachel says and she’s waiting for mom to wipe her. The 90 Day Fiance mom says her goodbyes and that’s the last you hear from her. Then Jon takes over as a solo commentator.

But before Rachel gets called to mommy duty, she is interrupted by Jon’s laughter while making another point in this Youtube show. Rachel is talking in a serious tone, so looks a bit miffed that Jon is laughing at her while she’s talking seriously.

Rachel doesn’t know what Jon is actually laughing at, she can’t see. Little Lucy is behind her mom shaking her head as her mom shares her thoughts.

Only when your ‘why’ is big enough will have the power to never give up. @rachelwalters01 thank you for loving me and seeing the father I could become and giving me purpose. #throwbackthursday

After Rachel realizes Lucy put on a show of her own, they get back to the business of astrology. Jon is a Scorpio who is “often misunderstood due to your intensity,” Rachel reads to him from the horoscope.

She herself is a Taurus and that means “tact and charm” and someone who is “always aware of feelings and needs of others,” Rachel reads. This is very true, according to both Jon and Rachel.

Apparently a Scorpio and Taurus have great chemistry in the bedroom, which is something Jon quickly validates. This 90 Day Fiance duo, who are an ocean away from each other, come back to the bedroom topic again in this segment.

While they’ve been married for a while now they must feel like they’re still on their honeymoon when Rachel makes the trip to England to see her hubby. She goes about twice a year and while that has to be a special time for both of them, the goodbyes just have to be brutal.

Jon’s visa boils down to red tape and money but the two are working hard at it. This is one couple that fans believe is the real thing. This husband and wife team isn’t about fame and money, they’re about love and wanting to be together. Take a look at their Shoot the Breeze series, it’s bound to put a smile on your face.