90 Day Fiance star Rebecca Parrott swoons over Zied Hakimi looking ‘sexy’ with his arms sporting tattoo art from his shoulders to his wrists. It looks like Zied decided to tat up in his latest posts with Rebecca following closely behind with her comments.

Zied Hakimi’s ‘90 Day Fiance partner didn’t waste any time letting her “baby” know how surprised she was. Rebecca Parrott’s tattoos were featured on their TLC reality show season. But at one point, they became a source of shame for Zied. Taking that into consideration, why would he decide to cover his arms in tattoos?

In his country of Tunisia, women don’t sport tattoos. Rebecca traveled to Zied’s home during their season of 90 Day Fiance: Before the 90 Days.

While meeting his parents, Rebecca wore long sleeves to cover her tattoos. But when her sleeve rose up a bit her tattoos were exposed. This didn’t go over very well with Zied’s parents. 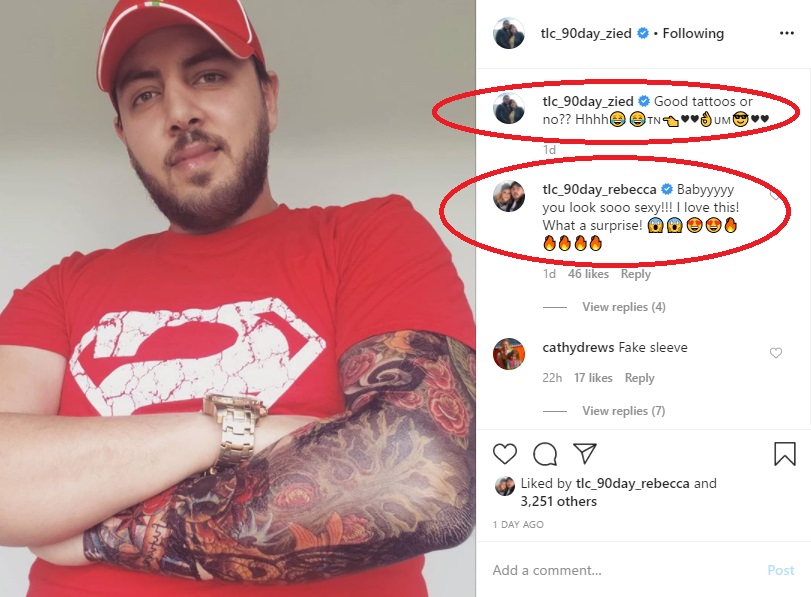 90 Day Fiance: What Now? featured this couple who announced Zied’s visa came through. He came to the US where he had 90 days to marry Rebecca. And that they did… on April 19th, they tied the knot in Rebecca’s home state of Georgia.

These two became one of several couples who married despite the decades of differences in their ages. She’s 48 and he’s 26, so there are 22 years between them in age.

But while in Tunisia, Zied sometimes acted like the older of the two. Especially when following the traditions of his culture.

So, it is interesting for the fans of this TLC reality show to see Zied sporting two arms full of what looks like tattoos. But are they real?

It didn’t take long for his followers to question Zied, who suddenly became saturated with tattoos on his arms. Apparently the tattoos, no matter how real they look, are fake sleeves.

Not only did his 90 Day Fiance followers call him out on this, but it looks like he hinted to this himself in the post above. He asked his fans – “Good tattoos or no??”

It’s odd that Zied, who seemed so against tattoos, would post two photos of himself with the look of many tattoos on his arms. But from the sound of Rebecca’s enthusiasm, maybe Zied was doing a little role-playing for his wife. Zied did admit to fans that they were fake he has a great sense of humor and fans love it.

Rebecca’s comment is in the post above circled in red. She seems to think this is one hot look on her “baby”.