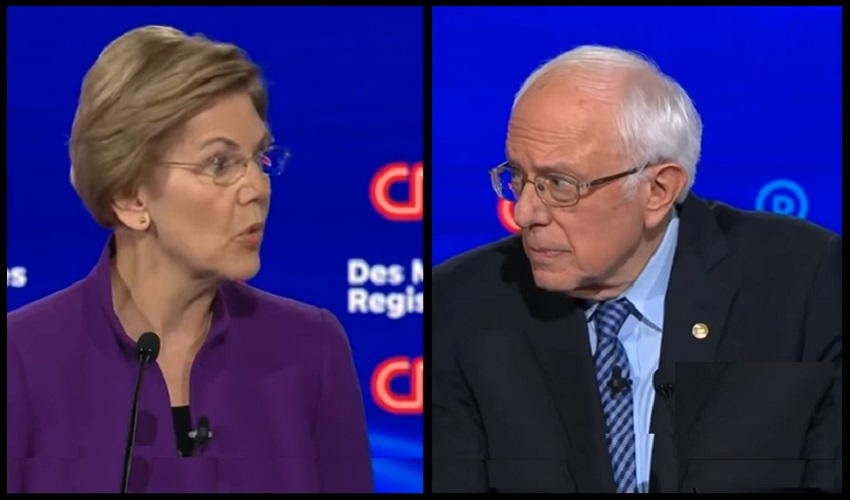 It looks like Elizabeth Warren and Bernie Sanders entertained the masses at Tuesday’s Democrat presidential primary debate. You might even say it offered some comic relief that the debate needed. It certainly caught the viewers’ attention. So, most likely Bernie and Liz find their ears ringing in the aftermath.

The two presidential hopefuls clearly demonstrated why the Democratic Party wades through uncertainty. So far, they’ve failed with their attempt to get enthusiasm going for their party with the 2020 campaigns.

Elizabeth Warren saw her moment of pride upstaged by Bernie Sanders. She started counting the years while they stood at the podiums. Then they quibbled over the wording of Warren’s proud statement.

The Massachuestts Senator claimed she was the only politician on the stage to defeat a Republican incumbent in the last 30 years. But the Senator from Vermont had an issue with that. Bernie Sanders didn’t count the years the way Elizabeth Warren presented them.

This started a scene that did nothing to help the Democrats. It highlighted the party’s inability to sway the voters to take their candidates seriously enough for presidential material. It got worse once the impromptu Bernie and Liz show played out.

It’s All In The Wording

Warren stated that among her colleagues in this debate, she was “the only one who’s beaten an incumbent Republican in 30 years.” But Sanders did the math. Then he went by his own perception of his colleague’s reported “30 years”.  This prompted Sanders to see an error in Warren’s statement.

Bernie Sanders spoke up and defended his record against Warren’s declaration. He said, “Well, just to set the record straight, I defeated an incumbent Republican running for Congress”.

In a softer voice than she used to make the original statement, Warren throws out a one-word question – “When?” Sanders bounces back with “1990”.

Then the counting begins with Warren going through the number of years. So now the debate wasn’t about what they can do as president. No, it turned into a showdown on whether or not Bernie Sanders beat a Republican in the “past 30 years” or “30 years ago”.

That 30-years was important to Sanders. Mostly because it was in 1990 when he won his seat in Congress after beating out a Republican. So by Bernie Sanders’s standards, Elizabeth Warren was wrong.

On the other hand, Warren felt she presented her case correctly with “past 30 years”. So by her standards of terminology, the Senator from Vermont was wrong.

Sanders’ take was that 1990 was “30 years ago” and he wasn’t letting that go. Warren stood firm with her statement as well. If nothing else, the 30-years debate offered great free advertising for the Republicans. It’s one more example of how the nation’s important affairs get pushed to the wayside for things that only speak to egos.

Did it really matter who is right and who is wrong? It’s not going to solve the nation’s drug epidemic, bring companies back to the US with their jobs, or stop the shootings in our streets.

No, it solves nothing.

Come back to Entertainment Chronicle for Up-to-date news on politics.