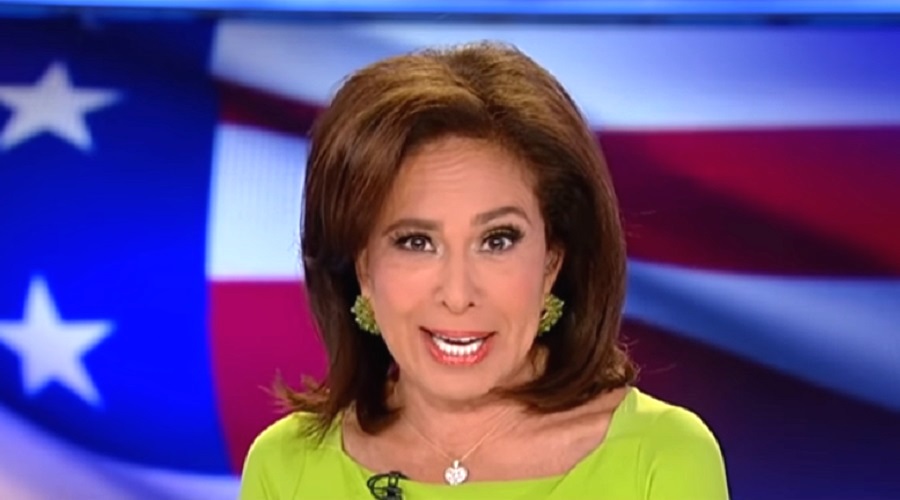 Justice with Judge Jeanine star offered a bit of comic relief to Fox News viewers Saturday night when she coined a nickname for Adam Schiff. What the popular judge said prompted a Google search for the term while she was still on the air. Then a tsunami of tweets followed that applauded Judge Jeanine Pirro’s creativity for coining a “lying sack of Schiff”. That also came along with an army of laughing emojis.

Adam Schiff, a Democratic Representative from California, makes headlines almost daily these days for his part in the whistle-blowing saga regarding President Trump. First, Judge Jeanine made it clear that Schiff was taking way too many liberties with the truth.

She offered a barrage of harsh words around the Representative’s actions. It seems Judge Jeanine didn’t hold anything back while describing what she thought of this Representative from the US Congress.

Schiff’s version of what a whistleblower supposedly witnessed crumbled due to President Trump’s unprecedented move. It seems Schiff thought he could gather a lot of steam claiming a phone call between President Trump and the Ukrainian President was an impeachable offense.

But the president one-upped Schiff when he released the transcript of the phone call. This showed the truth, which is a different version than Schiff offered. Then Judge Jeanine came right out and said Schiff was lying.

‘Fake’ Statement Spun Into a Parody

The transcript that Schiff appeared to read at a Capitol Hill hearing is now what he conveniently describes as a “parody” of that phone call transcript. Although, the word parody wasn’t mentioned before he offered the embellished version of Trump’s call. Judge Jeanine made sure to suggest to her viewers that this was nothing but an underhanded deed.

President Trump summed up Schiff’s actions in a tweet:

“Rep. Adam Schiff illegally made up a FAKE & terrible statement, pretended it to be mine as the most important part of my call to the Ukrainian President, and read it aloud to Congress and the American people. It bore NO relationship to what I said on the call. Arrest for Treason?”

So there’s not much more to discuss, the truth comes via that transcript. The phone call transcript said one thing but Schiff now claims he offered a “parody” of that transcript, which said something different. It looks like Judge Jeanine, who is famous for her lack of sugar-coating, took a page right out of President Trump’s playbook.

Trump will go down in history for many of his accomplishments. But most likely folks will also remember him as the president who liked to give out nicknames and coin terms. His “Fake News” term is probably one of his most popular. He recently changed it to “Corrupt News” because he said it needed something tougher than fake news. 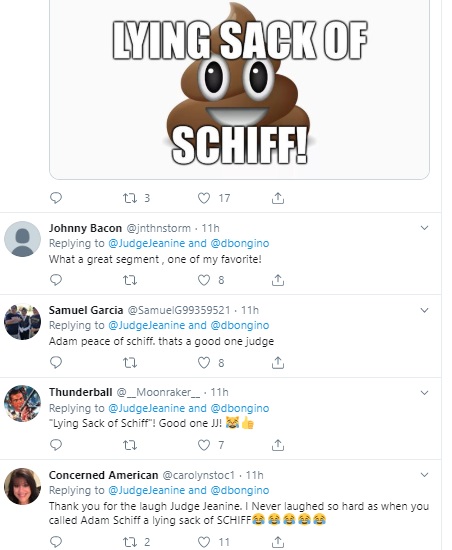 So when Judge Jeanine offered up her coined term for Adam Schiff, Fox News viewers took notice. When she first mentioned her newly coined term for Schiff on her show it started to trend on Google search. The tweets above offer just a glimpse of the many comments Judge Jeanine got for her “lying sack of Schiff” comment.

But Judge Jeanine’s popularity soars today so it looks like job security is the furthest from her mind.