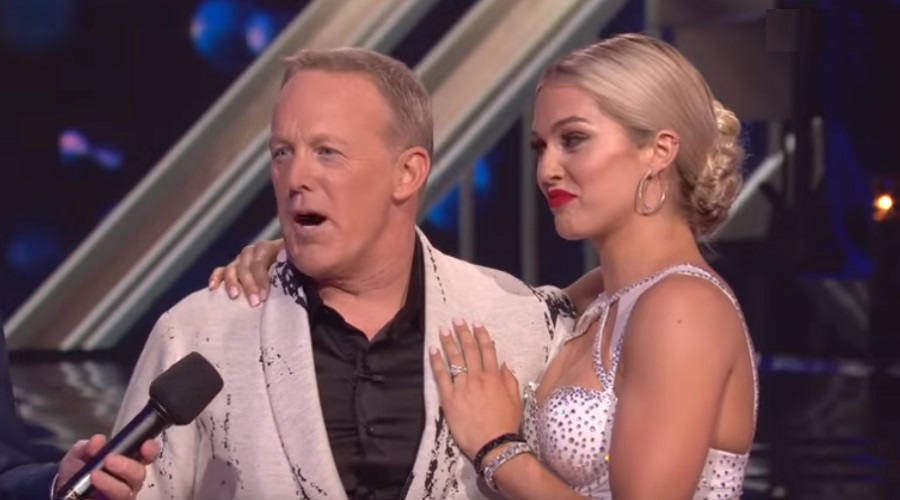 Sean Spicer continues his surprising reign on Dancing with the Stars but it looks like there’s more to his success than his robotic-like dance moves. The former press secretary to Donald Trump appeared on Fox News Thursday night to discuss this phenomenon. This was just one of the several interviews for Spicer since his Dancing with the Stars gig started.

Fans, along with Sean Spicer himself, agree he’s no John Travolta on the dance floor. But despite his dance moves looking a bit on the stiff side, his popularity soared and he’s voted back again as a contestant.

It looks like there’s more to it when it comes to keeping Spicer on Dancing with the Stars. His dancing isn’t leaving America enthusiastic to see him shake his booty.

Sean expressed how humbling this experience turns out to be each week as viewers across the country cast their votes. He’s amazed how people stop during their busy evenings to cast a vote for him. He offered a shout out of thanks to those voters. At the same time, he expressed his surprise as to how his appearance on Dancing with the Stars has played out so far.

Thanks to everyone who voted for me on @DancingABC last Monday. I need your votes again tonight. I dance last so please vote right at 8pm. Text SEAN 10 times to 21523 and vote 10 more times at https://t.co/1dZ9scnnFa #TeamSweetNSpicey #DWTS #dwts28

Despite being the former press secretary to Donald Trump, many Americans still affiliate Spicer with the President. When Donald Trump Jr asked Trump supporters to cast their vote for Sean Spicer it seems that affiliation grew stronger. So it looks like a vote for Spicer might just be a vote for Trump as well.

Donald Trump supporters have a while to wait to cast their vote for the President again. But it seems this Dancing with the Stars voting system offers up an avenue for his supporters to show their support. Especially after Trump’s son’s shoutout for Spicer. So is Spicer’s dancing keeping him on the stage or is it Trump that’s fueling the votes?

This very simple and polite tweet resulted in death threats for both Karamo and his family. One incident left his son in fear as a car chased him down the street while the occupants yelled profanities at him. The Queer Eye star suspended his Twitter account temporarily and shut off the comment section on Instagram.

Sean Spicer is seen as a good sport by many online today. He’s also seen as a lousy dancer. But he’s still voted back on Dancing with the Stars. So is America sending a message of support for the President via the overwhelming number of Sean Spicer votes?

Sean Spicer continues to compete on Dancing with the Stars, which airs Mondays (8 p.m. ET) on ABC.

Make sure to stop back to Entertainment Chronicle for reality shows, TV shows, along with all soap news and spoilers.