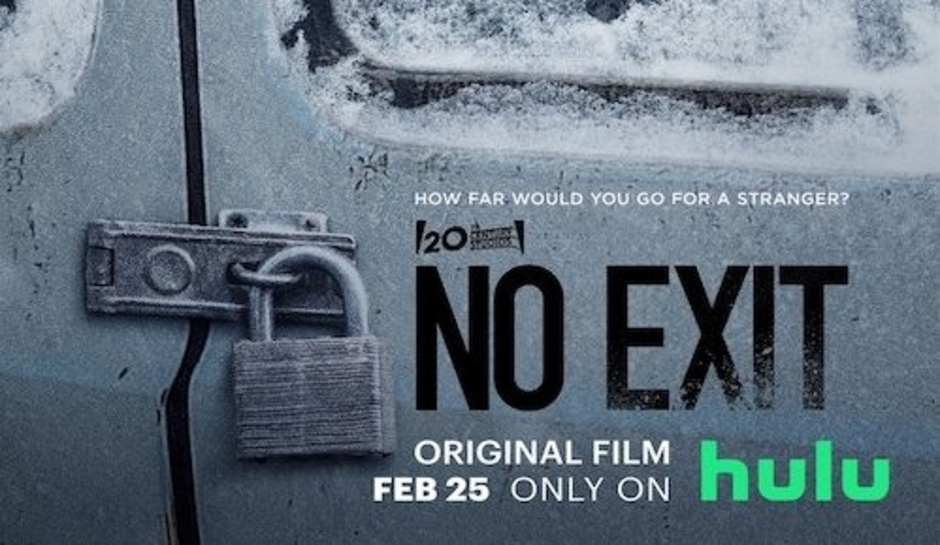 The idea of being trapped and isolated has become something many people can relate in recent years. Add in the backdrop of a snowstorm and a potential kidnapping and you get the plot of the Hulu original film ‘No Exit.”

Behind the Scenes
In 2017, author Taylor Adams published his novel ‘No Exit.” The story follows a recovering addict who drives in a snows storm to visit her dying mother. During her trip, she’s snowed in at a rest stop where she finds out a kidnapping is taking place. Shortly after the release of the novel, 20th Century Fox bought the feature rights to the novel. Following Disney’s accusation of Fox, the film was given the green light to debut on Hulu in the United States. Damien Power was brought on to direct, with Havana Rose and Danny Ramirez signing on to star. Ant-Man’s Andrew Barrer and Gabriel Ferrari were responsible for the screenplay, which wrapped filming in New Zealand in June 2021.

Quick Summary:
Darby Thorne is a recovering drug addict in therapy when she learns that her mother is dying in the hospital. Darby finds a way to escape a rehab center and make her way to see her mother. During the drive, Thorne is forced to pull over due to being caught in a blizzard and a massive snowstorm. She makes her way to a rest stop in the form of a local visitors center, sharing the space with four others. Ash, Lars, and married couple Ed and Sandi mingle with Darby, as they play a round of the card game bullsh*t.

While attempting to gain a phone signal outside, Darby notices a nearby van belonging to one of the others. Inside the van, Darby finds a young girl named Jay tied up with tape across her mouth, appearing to be a victim of a kidnapping. Darby scrambles to deduce who is responsible for the kidnapping in a cunning game of cat and mouse.

Ending: With Spoilers
Heading into the third act, we find out that Ash and Lars were responsible for the kidnapping in an attempt to extort money from her parents. An additional twist also reveals that Sadie is Jay’s parents’ housekeeper who helped in the kidnapping and extortion. With the cat out of the bag, the plan spirals out of control. The closing moments result in a bloody climax with Darby left clinging to her life.

‘No Exit’: Movie Thoughts and Rating:

In the age where new content drops on endless steaming services on a weekly basis, a film like ‘No Exit’ could easily be lost in the shuffle. Despite its predictable story structure, some of the twists could catch you off guard. The film is shot well with cinematographer Simon Raby providing a claustrophobic and chilly atmosphere. Damien Power is a young director but did solid work with ‘No Exit.’ He paces the story well leading up to a satisfying conclusion. The acting by the entire cast was more than acceptable, with veteran Dennis Haysbert being a familiar face.

Currently on Rotten Tomatoes, ‘No Exit’ holds a 57 percent Critics Score and a 66 percent Audience Score. All in all, you can do a lot worse than ‘No Exit,”, especially during the final days of Winter. Grab a blanket, hot chocolate, and some warm popcorn and enjoy 95 minutes of cinematic isolation. 3 out of 5.