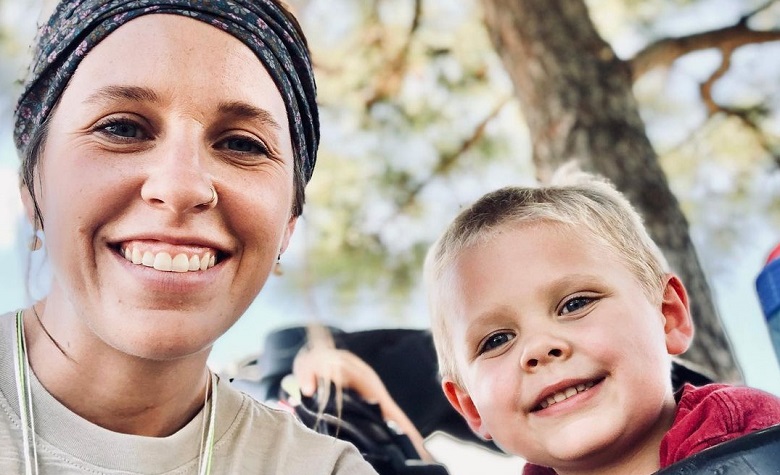 Counting On star Jill Duggar has been sharing positivities on social media lately. Jill suffered a heartbreaking miscarriage last month. Since then, Jill has been giving most of her time to her kids and husband. Recently, Jill revealed that she and her family went out and for a relaxing day at a local park. Now, Jill is back to share another wholesome time with her family. However, this time, it’s about her and Sam’s quality time together while Israel is at school.

In a social media post, Counting On star Jill Duggar shared an update about her and her son Sam. Apparently, the two are left at home as Israel heads to school. It also appears that Derick Dillard is busy working and studying in his office room. “Happy Monday y’all! Sam and I are checking off the to-do list today after a nice slow weekend with our ppl,” Jill said. Moments later, fans praised Jill’s new glasses look. “Your glasses are super cute!” one person said. According to Jill, she’s wearing her blue light glasses which helps reduce eye strain. Fans also praised Jill for making good memories with her kids even on a regular day.

Counting On star Jill Duggar revealed what she and Sam did for Monday while waiting for Israel. According to Jill, Sam has been busy working on his toys. Jill also said that she’s rewarding Sam with chocolates for every screw he tightens on their chairs. Jill also said that she’s preparing some preschool stuff for Sam. After that, Jill revealed that her sister, Joy-Anna Duggar, sent her some refreshing drinks.

Counting On: Jill Duggar Praised For Sending Israel To A Public School

Counting On fans have been praising Jill Duggar for sending Israel to a public school. Apparently, Israel is one of the few members of the Duggar family who’s currently studying in a real school. It’s known that the Duggars follow traditional homeschooling. However, fans think that things are changing inside the conservative family, and some of the Duggar kids are starting to make decisions on their own.

At this point, reports claimed that the Duggars are falling apart due to Josh Duggar’s arrest. Jim Bob Duggar’s candidacy also shocked the world, and fans think that some of the Duggar kids don’t support their father.