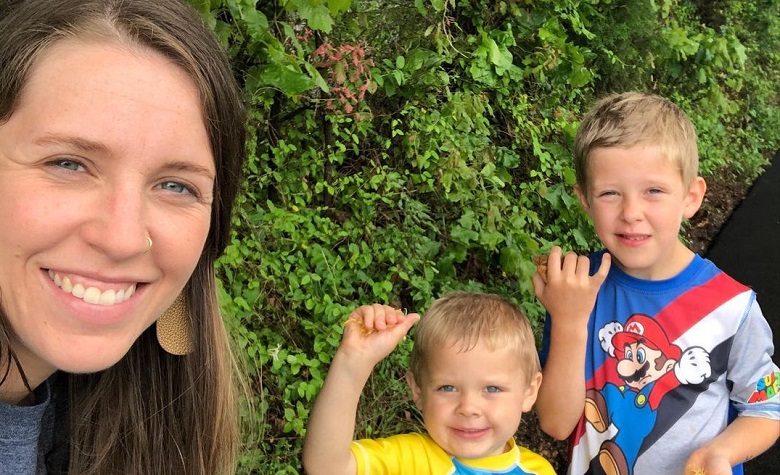 Counting On star Jill Duggar recently made headlines after sharing her morning exercises with her son, Sam. Apparently, Jill ran around their area while Sam rides his bicycle. Jill also thanked her husband, Derick Dillard, for coaching her about running. According to Jill, Derick used to be a runner, and it’s been one of her inspirations. Now, Jill is back to share another physical day with the kids. Apparently, Israel participated in a sprint just like his father. Fans were also surprised after Israel and Derick coincidentally replicated Derick’s picture with his father back in the day.

In a social media post, Counting On star Jill Duggar shared pictures from Israel’s participation in a sprint. “This right here gives me all the feels. Derick ran cross country in school and yesterday Israel got a chance to run in his first mini cross country meet,” Jill said. It’s clear to see that Jill and Derick are so proud of their son. Jill even shared a picture of Derick guiding and cheering for Israel while he runs. After that, Jill said that they ate at a fast-food restaurant and the kids immediately fell asleep as soon as they got home.

Aside from sharing Israel’s sprint, Counting On star Jill Duggar shared a picture of Israel and Derick Dillard coincidentally replicating an old picture. “We didn’t even mean to replicate pic 5 in pic 4, but when we got home we realized this pic of Derick with his late dad was nearly identical to the pic we’d taken,” Jill said. “And even on the exact same day 19 years ago!” she added. Fans were also amazed by how similar both pictures were. “This is adorable! Israel is truly Derick’s lil twin,” one fan said. Some also said that Israel resembles his grandfather.

Counting On: Jill & Derick Praised For Their Parenting

Counting On star Jill Duggar loves to share her family’s recent activities. Fans also praised Jill and Derick Dillard for making unforgettable memories with Sam and Israel. Apparently, Jill and Derick love to bring the kids in camping and hiking. Jill and her family also went headlines after their week-long vacation in Oregon. It also appears that they’ve been into sports lately. Jill is also praised for bringing Israel to public school.