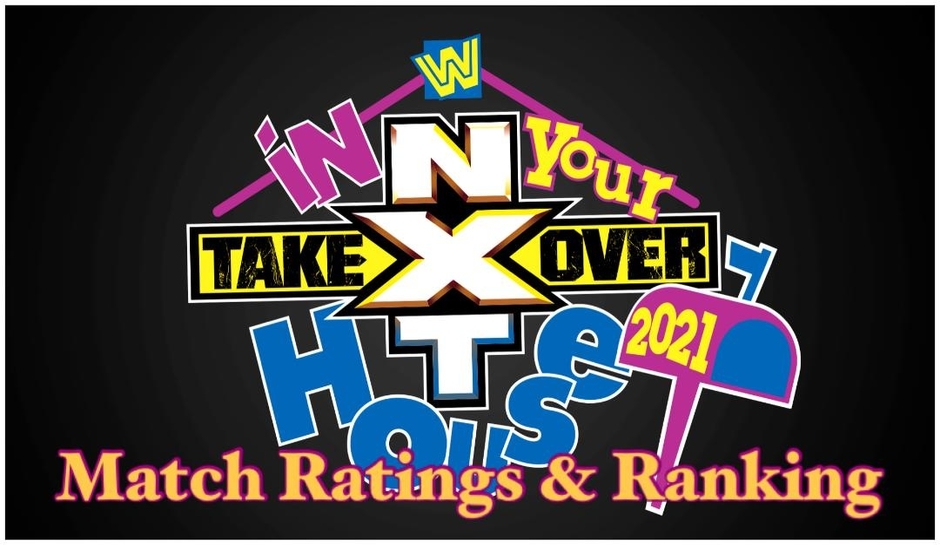 WWE NXT TakeOver: In Your House returns for a night of new school action with an old-school feel. Five big matches are scheduled, with the main event set for a Fatal 5-way match. The Million Dollar Championship will also be on the line in a ladder match, as well as the Women’s title.

Every match on WWE NXT TakeOver: In Your House will include a highlight moment, what the storyline progression is, and a final analysis. Each match will be given a star rating and be ranked from worst to best.

5) Xia Li d. Mercedes Martinez
Highlight Moment: Xia Li attacks early but Mercedes Martinez gets the upper hand in the ring with a hard suplex. Li makes a comeback by dragging Martinez to the outside and slamming her into the ring post. Xia Li misses a kick as she hits the ring post allowing Martinez to make a comeback in the middle of the ring, getting a two-count off an elevated slam. Li is able to bounce back and hit a 360 spin kick for the win. After the match, Li attempts to attack with a chair but Martinez intercepts the chair and uses it on Li and Boa. Martinez is then attacked on the entrance ramp by Mei Ying.

This is exactly why you must FEAR TIAN SHA. #NXTTakeOver @RealMMartinez @FearTianSha pic.twitter.com/bUQpkPFoeg

Storyline Progression: Mercedes Martinez has been on a roll in WWE NXT in recent weeks, but that hasn’t stopped Xia Li from playing mind games. It was four years ago at the Mae Young Classic that Li was defeated by Martinez, and she’ll look to even the score at TakeOver: In Your House.

4) NXT Women’s Championship: Raquel Gonzalez d. Ember Moon
Highlight Moment: Ember Moon starts quickly with a dropkick and a headscissors. On the apron, Moon gets caught and knocked off to the barricade. In the ring, Gonzalez hits a side slam and a twisting Vader bomb for a two count. Moon makes a comeback, hitting a code red for a near fall. Gonzalez retreats to the outside but gets hit with a Moon suicide dive that knocks her over the announce table. Moon heads to the top but is distracted by Dakota Kai on the outside. Gonzalez takes advantage and nails a superplex that gets a two-count. Gonzalez attempts a one-arm powerbomb but is hit with a modified eclipse before connecting with a codebreaker from the top.

Moon goes up again and hits the eclipse but only gets a two-count after Kai puts Gonzalez’s foot on the rope. Shotzi Blackheart runs to ringside to chase Kai to the back. Moon then hits a tornado DDT from the top to the entrance ramp before rolling her into the ring for a two count. Gonzalez counters a Moon eclipse with a snake eyes into the corner before hitting the one-arm powerbomb for the win.

Storyline Progression: Just last on WWE NXT, Ember Moon and Shotzi Blackheart defeated Raquel Gonzalez and Dakota Kai. After the match, Gonzalez beat down Blackheart and warned her that she had no shot in singles action. In recent weeks, Moon has made it clear that she will do whatever it takes to become the new Women’s Champion.

Final Analysis: Really good match that seemed to get a little sloppy down the stretch. Gonzalez continues to be booked strong and this was no exception. Worth a Watch. ***1/2

3) Million Dollar Championship Match: LA Knight d. Cameron Grimes
Highlight Moment: Cameron Grimes and LA Knight fight for position early on before two ladders are brought into the ring. Knight is knocked off the ladder to the outside as Grimes pushes a second ladder into his midsection. Knight struggles to get to his feet before eating a swing kick to the face by Grimes. LA Knight makes a comeback, as he slams Grimes into the barricade and the steel steps in front of Ted Dibiase. Knight sets a ladder between the apron and the barricade before the action moves back to the inside of the ring.

Go big or go to the moon.

Grimes then brings the golden million dollar ladder into the ring as he and Knight climb to the top. Knight is knocked off but bounces off the ropes and into the ladder as Grimes crashes to the ground as well. The action heads to the outside as Grimes climbs to the top of the scaffold and launches himself onto Knight. Grimes gets to the top of the ladder but Knight tips it over as Grimes crashes through yet another ladder on the entrance ramp. Back inside, Knight climbs the ladder, grabs the briefcase, and becomes the new Million Dollar Champion.

Storyline Progression: Cameron Grimes has been riding high ever since falling into a big paycheck. However, at every turn the WWE Hall of Famer “The Million Dollar Man” Ted Dibiase has been there to cut into his action. With Grimes looking to get on Dibiase’s good side, LA Knight has interjected himself by claiming he’s worthy of wearing the Million Dollar Championship.

Final Analysis: This one started a bit slow but really picked up as time went on. LA Knight is exceeding expectations since his debut. From being a solid mid-card act on Impact Wrestling into a legit top-quality wrestler under the WWE umbrella. Cameron Grimes is over with the crowd and him winning the belt eventually after a chase will pay off. Must-Watch. ****

2) NXT North American and Tag Team Title Match: Bronson Reed & MSK d. Legado del Fantasma
Highlight Moment: MSK and LDF do some early chain wrestling before Santods Escobar and Bronson Reed made their way into the ring. Escobar attempts a slam on Reed but collapses for a two count. Joaquin Wilde gets the tag but eats a double-team attack from MSK. MSK then elevate Wilde by his feet and arms before Reed connects with a senton for a near fall. Outside the ring, Nash Carter takes out Escobar with a plancha before the remaining members of LDF and MSK do the same. Reed then charges and takes out everyone with a suicide dive.

Back in the ring, Lee and Escobar trade blows before heading up top. Escobar hits an avalanche frankenstiener. Reed gets the take and stacks, Wilde and Mendoza, on his shoulders for a double Samoan drop. On the outside, Escobar grabs the NA Title but is hit with a massive avalanche splash that breaks the barricade. Back in the ring, MSK takes out Wilde before Reed hits a top rope splash for the win.

Storyline Progression: Legado del Fantasma have been testing the boundaries as of late on WWE NXT, but they might have written a check they can’t cash. Bronson Reed won the North American Title last month and has been on the side of MSK in their war against LDF. In a winner takes all match, the winning team will walk out with all the gold.

Final Analysis: Great match to kick off WWE NXT TakeOver: In Your House. It was high impact and never took a downturn. Every wrestle had time to shine and it kept Santos Escobar, the biggest star, protected in the long run. Must-Watch. ****1/4

1) NXT Championship: Karrion Kross w/Scarlett d. Kyle O’Reilly,  Adam Cole, Johnny Gargano, and Pete Dunne
Highlight Moment: Kross is quickly the target of each man but is able to fight them off. Adam Cole gets caught in the apron skirt as he gets beat down in the process. Up the entrance ramp, Kross fights off Pete Dunne and Johnny Gargano but is then pushed through the In Your House door. Back in the ring, Cole and O’Reilly do battle before Gargano gets involved. Dunne makes his way to the ring and rolls up Gargano before getting hit with a DDT. Kross returns to the action and takes out O’Reilly on the outside before attacking Gargano. Kross suplexes Dunne over the barricade before hitting a tornado slam onto Gargano for a two-count.

On the outside, Gargano gets a second wind by taking out O’Reilly with a suicide dive and a botched flipping plancha onto Kross. After hitting a DDT onto Dunne, Gargano mixes it up with Cole in the ring. With Kross on the outside, Cole, Dunne, O’Reilly, and Gargano go at it with an intense sequence until the champion heads back inside and cleans house. Kross hits a series of German suplexes on each wrestler before attempting it on Dunne who escapes.

O’Reilly and Cole then grab Kross from the apron and hit a powerbomb onto the announce table. Dunne attempts a moonsault but eats a pair of superkicks from Gargano and Cole. Gargano applies a double GFargano Escape to both Cole and Dunne. Cole hits the Panama Sunrise on Gargano but gets pulled to the outside and hit with a brainbuster by Dunne. In the ring, Kross and Dunne exchange a pair of German suplexes before Dunne gets a near fall. Dunne applies a triangle submission until it’s broken up by the remaining three. Kross applies the cross jacket but Dunne breaks free. Gargano hits the ring but falls into a cross jacket by Kross until Cole breaks it up. O’Reilly puts Cole in a submission but Kross returns to lock in another cross jacket, which is enough to get the win.

Final Analysis: This was an intense match from the start and it never let up. It was full speed ahead action with everyone getting time to shine, with the focus on keeping Kross looking like a monster. It could’ve tightened up a bit and slow down in spots, but that’s a minor gripe. Must-Watch. ****1/4