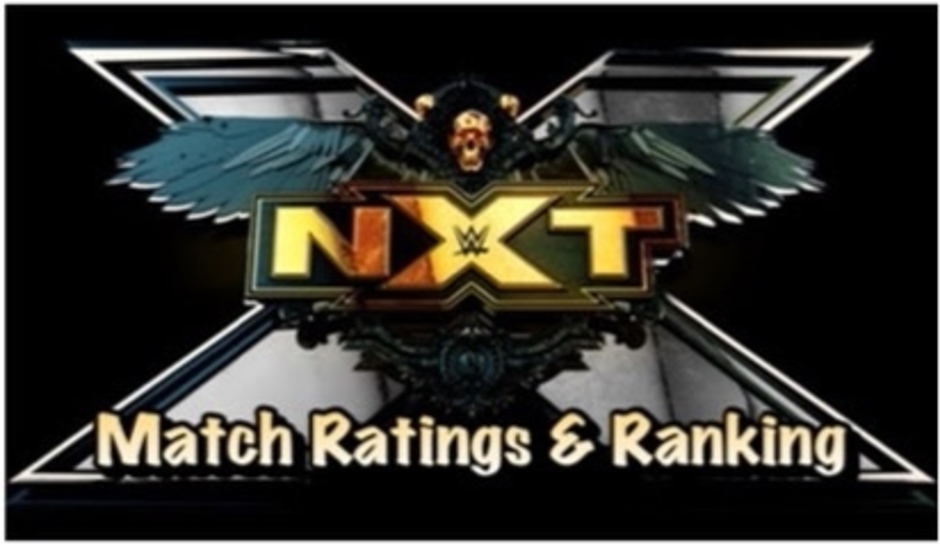 With WWE NXT TakeOver: In Your House just days away, all the stars of the black and gold brand were going full force. Ember Moon took on Dakota Kai in the main event. The Grizzled Young Veterans faced the challenge of two up-and-coming stars from 205 Live, while Austin Theory and Oney Lorcan clashed.

Every match on WWE NXT will include a highlight moment, what the storyline progression is, and a final analysis. Each match will be given a star rating and be ranked from worst to best.

Storyline Progression: Sometimes a quick squash is good to establish a new star.

Final Analysis: It was quick and easy at least. Take a Pass. SQUASH.

4) Isaiah “Swerve” Scott d. Killian Dane
Highlight Moment: Killian Dane’s power was the story early on as he was able to use his weight to his advantage. Scott was able to counter Dane’s attack, using Hit Row as a distraction on the outside. Dain attempts a fireman’s carry but Scott is able to slip out. Scott goes for a half-nelson but Dain breaks free and gets Scott on his shoulders. Kain hits a slam down and senton for a near fall. Dain heads to the top rope but is distracted by Hit Row. Drake Maverick dives on Ashante but gets his clock cleaned by Top Dolla., who argues with Dain. Scott nails the knockout blow on Dain and picks up the win.

Storyline Progression: Ever since the formation of the Hit Squad, they’ve been making a name for themselves on WWE NXT. Killian Dain and Drake Maverick have been at odds with the Hit Squad, and they had a chance to further their dispute.

Final Analysis: Decent match but it didn’t get too much time to establish itself. Skim It. **1/4

3) Grizzled Young Veterans d. Austin Grey and Ikeman Jiro
Highlight Moment: Austin grey and Ikeman Jiro have been holding their own on 205 Live, but the GYV were just too much to handle. Despite a brief flurry, GYV controlled the majority of the match, even after Tomasso Ciampa and Timothy Thatcher made their way to ringside with chairs. GYV hit the Ticket to Mayhem for the win.

Storyline Progression: The Grizzled Young Veterans are gearing up for a match with Tomasso Ciampa and Timothy Thatcher. After the match, a tornado tag team match is made for next week, causing Ciampa and Thatcher to run off the GYV.

Final Analysis: Fun match between both teams but it was quick and for a reason. Next week will be a must-watch for sure. As for this, Skim It. **1/2

2) Ember Moon d. Dakota Kai (DQ)
Highlight Moment: After a charge from Ember Moon, Dakota Kai is able to get the advantage with a series of hard strikes. On the outside of the ring, Kai is able to swing Moon’s entire body in a 180-degree angle to slam her head into the ring post. Moon is able to bounce back as she takes out Kai and Gonzalez with a suicide dive to the floor. Moon heads up top but Gonzalez rushes the ring to cause the DQ. Ember Moon fights back and it’s the eclipse on Gonzalez before celebrating with the title.

Storyline Progression: Ember Moon has been a top star for some time in WWE NXT and she makes for a credible challenge to Raquel Gonzalez and the women’s title.

Final Analysis: Good match but it felt like it was building to something bigger, especially with the DQ finish. Gonzalez vs Moon should be interesting. Worth a Watch. ***

Eyes on the Prize

1) Oney Lorcan d. Austin Theory
Highlight Moment: Austin Theory gets the early advantage and connects with a sweet dropkick coming out of the corner. Lorcan bounces back and hits stiff chops that echo through the Capitol Wrestling Center. Lorcan heads to the top rope but is cut off. Theory bounces off the top ring rope, catches Lorcan, and nails a Spanish Fly for a two-count. Johnny Gargano and Pete Dunne appear at ringside and come to blows with each other as Lorcan lands a half nelson uranage for the win.

Storyline Progression: With a shot at the NXT Title on the line at WWE NXT TakeOver: In Your House, Johnny Gargano and Pete Dunne are leading their respective factions into battle.

Final Analysis: Very good match as it gave Theory and Lorcan time to shine. Worth a Watch. ***1/2