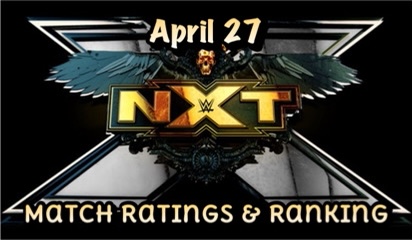 WWE NXT is positioning themselves following TakeOver: Stand and Deliver earlier this month. Karrion Kross remains at the top of NXT as the status of Finn Balor is unknown. Bronson Reed battled Austin Theory for a shot at Johnny Gargano’s North American Title. Dakota Kai and Mercedes Martinez met one on one. The main event was a hard-hitting 6-man tag team match with MSK and KUSHIDA taking on Legado Del Fantasma.

Every match on WWE NXT will include highlights, what the storyline progression is, and a final analysis. Each match will be given a star rating and be ranked from worst to best.

5) Zayda Ramier d. Toni Storm
Highlights: Toni Storm overwhelms Zayda Ramier from the start with a backbreaker and a press slam. Storm lands a German suplex before two corner splashes. Storm sets up for Storm Zero but instead puts Ramier on the top rope. Zoey Stark comes down to ringside and distracts Storm. Ramier is able to knock Storm to the ground and gets the upset win after a shooting star press.

An IMPRESSIVE @ZaydaRamierWWE is shocking the @WWEUniverse twice tonight: an astounding finisher AND a win over Toni Storm! #WWENXT pic.twitter.com/0ZlnZ6a8gn

Storyline Progression: Toni Storm and Zoey Stark have been at odds and Zayda Ramier getting the win gives her some shine as the story moves forward.

Final Analysis: This was basically a squash with a shocking ending to move forward the Toni Storm vs Zoey Stark feud. It was quick but fun while it lasted. Skim It. **

4) Imperium d. Drake Maverick & Killian Dane
Highlights: Killian Dane uses his power to work over Fabian Aichner who makes a blind tag to Marcel Barthel. Barthel is knocked to the outside and eats an uppercut upon rentering. Drake Maverick is hesitant to work over Imperium as he lands to low-angle dropkicks to Barthel. Maverick reverses a backdrop attempt and connects with a hurricanrana. Maverick is caught on the top rope as Barthel moves the action to the corner as Imperium keeps the offense in their corner heading to the commercial. Back from the break as Imperium continues to Maverick before he makes a comeback. As Maverick goes to make the tag to Dain, Imperium knocks him off the apron. On the outside, Alexander Wolfe hesitates to attack Maverick putting Imperioum briefly on the defensive. Back inside as Imperium hitting a double team doomsday elbow attack for the win.

Storyline Progression: Drake Maverick was shown earlier in the night being worried about facing Imperium. Maverick and Dain have been looking to get on the winning track while Imperium has their eyes on the tag team titles.

Final Analysis: Good match as Drake Maverick knows how to tag a beating while Imperium is equally as impressive giving one. Skim It. **3/4

3) Bronson Reed d. Austin Theory
Highlights: Austin Theory attempts to work around Bronson Reed as the match heads outside. Back inside Theory pulls the top rope down as a charging Reeds goes over the top rope to the floor. On the outside, Johnny Gargano lands a superkick to Reed while Theory takes him out with a plancha before the commercial. Back from the break as Theory works over Reed with a reverse chin lock. Reed makes his comeback with a big toss on Theory followed by a standing avalanche splash.

Theory is taken down by a chokeslam and then a standing senton by Reed gets a two-count. Reed counters a fireman’s carry by Theory and hits a Samona drop for another near fall. Dexter Lumis comes to ringside as he approaches Indie Hartwell. Lumis is knocked off the apron in an attempt to save Hartwell while Reed hits a big splash for the win on Theory.

Are Dexter & Indi the Jack & Rose of our time?! 🥺 #InDex #WWENXT pic.twitter.com/qXIo3WGU6g

Storyline Progression: Bronson Reed came close to winning the NXT North American Title at NXT TakeOver earlier this month. With Reed still a thorn in John Gargando’s side, he was given a #1 contender’s match if he could defeat Theory.

Final Analysis: Solid match that keeps Bronson Reed right in the mix for the North American Title. The added spin of Dexter Lumis and his interactions with Indi Hartwell just adds a bit of a side dish to the main story. Worth a Watch. ***1/4

2) Mercedes Martinez d. Datoka Kai
Highlights: Chain wrestling to start before Mercedes Martinez strikes Dakota Kai with a hard slap across the face. Martinez connects with a spinebuster that gets a two-count. Kai reverses Martinez into the corner while hitting a stiff kick that gets a two-count of her own. Kai continues her offense, landing a uranage backbreaker. Martinez takes a beatdown but is able to bounce back with a double underhook suplex. As Martinez has Kai struggling, Raquel Gonzalez rushes to the ring to save her partner and causes the DQ in the process.

Storyline Progression: Mercedes Martinez wanted to position herself as a top contender to Raquel Gonzalez by taking on her tag team partner.

Final Analysis: Really good opening match to kick off WWE NXT. Mercedes Martinez is a solid superstar while Dakota Kai was able to stay protected with the DQ finish. Worth a Watch. ***1/4

1) Legado Del Fantasma d. KUSHIDA & MSK
Highlights: KUSHIDA starts off with Joaquin Wilde before exchanging tags with MSK to control the action. Wilde regains the advantage before tagging in Raul Mendoza before they double-team Wes Lee. Lee makes a comeback of his in as he tags in Nash Carter who knocks LDF to the outside of the ring before the commercial. Back from the break as LDF is in control working over Carter in the corner. KUSHIDA finally gets the hot tag as he gets the better of LDF while hitting a divorce court DDT on Santos Escobar.

Cater makes the tag as MSK takes out LDF with double suicide dives. Back on the outside of the ring, Escobar takes out KUSHIDA with a powerbomb through the announce table. Carter is taken out on the outside as LDF beatdown Lee in the ring with a series of double-team moves. KUSHIDA makes his way back in the ring but is isolated by Escobar as LDF hit a neckbreaker closeline for the win.

Storyline Progression: KUSHIDA got the surprise win over Santos Escobar to win the cruiserweight title last week. With LDF hot the heels of MSK and their tag team titles, all six men were put together to even the odds.

Final Analysis: Exciting main event which was expected. Legado Del Fantasma have really become one of the best factions in wrestling with Santos Escobar leading the way. If this means more interactions with these six, then bring it on. Worth a Watch. ***3/4