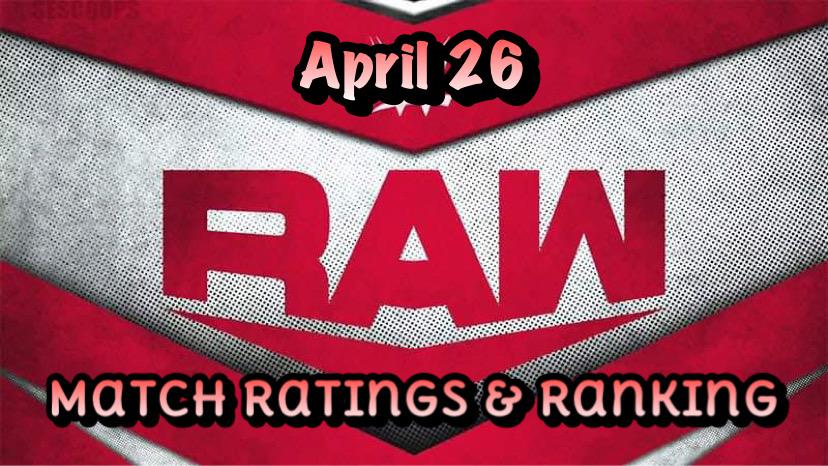 WWE Wrestlemania Backlash is only weeks away as the superstars of WWE Raw move forward to the next PPV event. Braun Strowman and Drew McIntyre team up to take on T-Bar and Mace, but then clash in the main event. The Miz joins forces with Elias and Jaxson Ryker to battle Damian Priest and The New Day. Charlotte returns to WWE Raw with a match against Mandy Rose.

6) Rhea Ripley, Nia Jax, and Shayna Baszler d. Asuka, Lana, and Naomi
Highlights: Shayna Baszler gets an early advantage over Asuka as Rhea Ripley makes the quick tag. Asuka gains the advantage as Naomi and Lana double team Ripley. Ripley applies a leg lock around the waist of Lana while beating her in the back with right hands. Mandy Rose and Dana Brooke head to ringside and throw a bucket of water at Baszler causing Jax to slip on the floor before the commercial. After the break, Asuka is on the attack and gets a two-count on Baszler after a hip attack. Jax gets the tag and hits an elbow drop for a near fall before crushing Asuka with an avalanche in the corner. After a brawl between both teams, Ripley hits the Rip Tide on Lana before Jax finishes it with a leg drop.

Storyline Progression: Rhea Ripley is continuing to stake her claim as the top woman on WWE Raw, with Asuka right on her heels. In the tag division, Mandy Rose and Dana Brooke continue to be a thorn in the side of Nia Jax and Shayna Baszler.

Final Analysis: Grading on a curve this was pretty decent, but it still was full of the Nia Jax slip and slide. The women’s division has no energy right now, with the tag side of things being the worst act on the main roster. Take a Pass. *1/2

5) T-Bar & Mace d. Drew McIntyre & Braun Strowman
Highlights: Originally a handicap match with T-Bar and Mace against Braun Strowman, Drew McIntyre was added during the commercial break. Following the break, T-Bar and Mace are working over McIntyre but Strowman makes the hot tag. Strowman quickly runs shoulder-first into the turnbuckle, but McIntyre makes a blind tag. The former WWE Champion cleans house while getting a two-count after a Future Shock DDT into T-Bar. McIntyre heads to the outside but is counted out with T-Bar and Mace getting the win. Strowman takes his frustrations out on McIntyre by power slamming him after the match.

Storyline Progression: After Mace and T-Bar were unmasked on last week’s WWE Raw, the former Retribution members were looking for revenge.

Final Analysis: Braun Strowman drags everyone down around him as his matches are almost always a slog to get through. Strowman’s character has been damaged beyond repair so it’s only making McIntyre look weak only weeks before his title match against Bobby Lashley. Take a Pass. *1/2

4) Charlotte d. Mandy Rose
Highlights: Chain wrestling to start as Mandy Rose surprisingly holds her own until Charlotte connects with a stiff closeline. Charlotte sets Rose up top but is knocked down before the queen is hit with a missile dropkick. Rose whips Charlotte into the corner but she comes out with a big boot that gets a two-count, much to the chagrin of the former champion. Rose is able to get two quick counts as Charlotte continues to argue with the referee. Charlotte bounces back and gets the win with natural selection.

#TheQueen @MsCharlotteWWE nearly loses her cool for the second week in a row on #WWERaw! pic.twitter.com/qPsAmxlIGo

Storyline Progression: Earlier in the night, WWE official Sonya Deville brought Charlotte Flair was brought back to WWE Raw just a week after being suspended. Charlotte apologized for beating down a referee and was reinstated.

Final Analysis: Solid effort from Mandy Rose as the Charlotte mini-feud with Eddie the referee continues. Skim It. **

3) The New Day & Damian Priest d. The Miz, Elias and Jaxson Ryker
Highlights: The New Day and Damian Priest get out to an early advantage as they rotate tags to keep The Miz under control. The Miz makes a tag to Elias but he doesn’t fair much as he’s closelined over the top rope. Back inside the ring, Kofi Kingston is knocked off the top rope by Elias as the heel side takes control before the commercial. Back from the break and Kingston is still working to break free and finally does with a hot tag to Priest. Woods then gets the tag in, and after brushing off an attack on Elias, all three men put a triple-team dropkick neckbreaker on Ryker. Woods counters Ryker and rolls him up for the pinfall win.

Storyline Progression: The Miz, John Morrison, Elias, and Jaxson Ryker put on a mini-concert until The New Day and Damian Priest head to ringside. The heel team get pelted with tomatoes leading to the match.

Final Analysis: Decent enough match but WWE Raw continues to suffer from a pattern of rematches and storylines that feel repetitive. Skim It if you are into the story, but it’s nothing you haven’t seen before. **1/4

2) Randy Orton & Riddle d. Shelton Benjamin & Cedric Alexander
Highlights: Shelton Benjamin and Cedric Alexander get the jobber entrance for the third week in a row. Riddle starts things off with Cedric Alexander who get the better of the exchange. Benjamin makes the tag as the former Hurt Business exchange tags to keep the action in their corner. Riddle finally makes a tag to Orton who comes in and quickly gets the best of Benjamin. Orton sets Benjamin up for a DDT before Riddle tags in and gets the pin after a floating bro.

Storyline Progression: After Riddle got an upset win over Randy Orton last week, the master of the RKO offered the bro a tag team opportunity.

Final Analysis: Fun match as the Randy Orton and Riddle experiment moves forward. It’s hard watching Benjamin and Alexander go from the best team in the company to glorified jobbers every week. Skim It. **1/2

1) Braun Strowman d. Drew McIntyre
Highlights: Braun Strowman uses his power to shoulder block Drew McIntyre down to start the match. McIntyre bounces back and targets the knee of Strowman, using a variety of moves to keep it grounded. Strowman catches McIntyre coming off the top rope before knocking him to the outside. Bobby Lashley’s music hits before the commercial.

Storyline Progression: Drew McIntyre demanded a match against Braun Strowman following the Monster Among Men’s attack earlier in the night. Strowman agreed but demanded the stipulation be made that if he wins, he is inserted into the title match as Wrestlemania Backlash. Back from the break and McIntyre nails a belly-to-belly suplex and a neckbreaker for a near fall. Strowman regains the advantage and connects with a superplex on McIntyre for a two-count. Lashley and MVP distract the referee allowing McIntyre to hit a Future Shock DDT. T-Bar and Mace then distract McIntyre while Strowman lands a powerslam for the win.

Final Analysis: Solid power match with Drew McIntyre doing the best he could to bring it to the finish line. It looks like it’s a triple threat at Wrestlemania Backlash. Skim It. **1/2