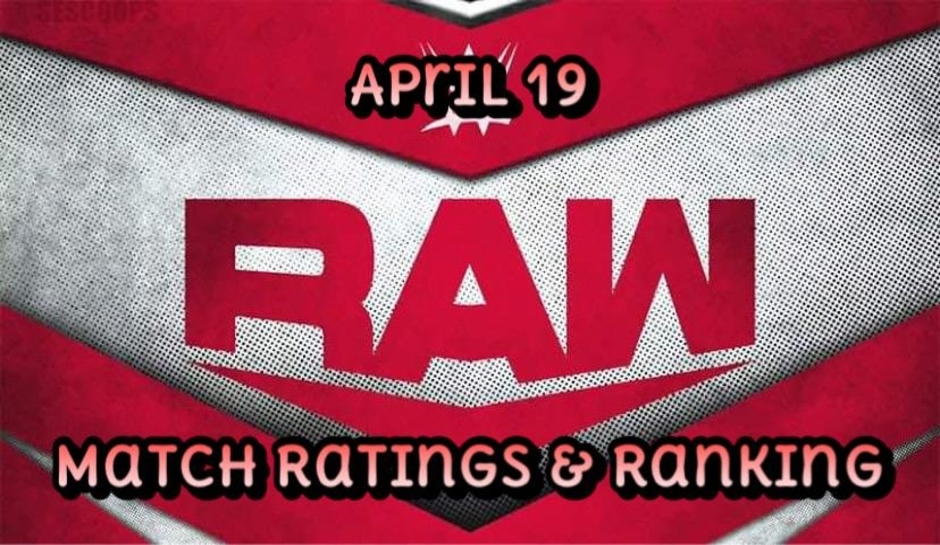 With Wrestlemania in the books, WWE Raw is building towards the next PPV event. WWE Wrestlemania Backlash is just weeks away with Drew McIntyre getting another chance at Bobby Lashley. In the main event, Charlotte Flair took on Asuka. The Miz and Maryse hosted a Miz TV celebration of their life, but it was crashed by Damian Priest leading to a match between the two. Drew McIntyre found some help as he got revenge against T-Bar and Mace.

7) Lana and Naomi d. Nia Jax and Shayna Baszler
Highlights: Lana and Naomi work over Nia Jax with a series of double team moves, getting a two-count after sliding kick and leg drop combo. Jax hits a rough-looking double suplex before Shayna Baszler gets the tag. Baszler stomps on Lana’s hand before Mandy Rose and Dana Brooke make their way to the entrance. Rose and Brooke show a clip from last week’s attack on Jax causing a distraction. With Jax heading up the entrance ramp, Lana gets the roll-up for a win over Baszler.

Storyline Progression: Lana and Naomi have been a thorn in the side of the tag team champions in recent weeks. On WWE Raw, Lana and Naomi get their chance at Nia Jax and Shayna Baszler.

Final Analysis: Nothing much to see here as the women’s tag team division continues to tread water. Take a Pass. DUD.

6) Drew McIntyre vs T-Bar and Mace
Highlights: Drew McIntyre quickly overwhelms T-Bar before getting a two-count after a suplex. Mace tags in and hits a spinning elbow as T-Bar tags in as a double team suplex keeps McIntyre down for a two-count. T-Bar and Mace continue to exchange tags until the referee calls for a bell as they refuse to break a 5-count. Braun Strowman then comes out before a commercial.

T-Bar and Mace d. Drew McIntyre and Braun Strowman
Back from the break and we’ve officially got a tag team match as Braun Strowman flexes his power on Mace. T-Bar and Mace eventually use their tag team experience to ground Strowman. McIntyre gets the hot tag and rips the mask off of Mace and beats him with it causing the DQ. Strowman makes the save before taking the mask off of T-Bar.

Storyline Progression: Drew McIntyre kicked off WWE Raw, calling out MVP for allegedly setting up an attack on last week’s show. During a shouting match with MVP, McIntyre was blindsided by Mace and T-Bar leading to a handicap match.

Final Analysis: This was pretty plodding but they all tried hard. Finally, the masks come off T-Bar and Mace so it’ll be nice to see them get a decent push. The tag division on WWE Raw could use the depth. Take a Pass on the match but give the unmasking a Skim It. *1/2

Priest puts down The Miz

5) Damian Priest d. The Miz
Highlights: Damian Priest launches The Miz to start the match before hitting a flying elbow. Maryse distracts Priest from the outside allowing The Miz to get the advantage and hit a double axehandle from the top rope. The Miz unloads with several kicks before Priest bounces back with kicks of his own. Maryse attempts another distraction but The Miz can’t capitalize as Priest nails Hit The Lights for a three count.

Storyline Progression: During The Miz TV segment earlier in the night Damian Priest made his way to the ring. Priest got under the skin of Maryse who volunteered The Miz for a match on WWE Raw.

Final Analysis: Decent enough match but this angle seems pointless and should’ve been wrapped up at Wrestlemania. Take a Pass. *1/2

4) Elias d. Kofi Kingston
Highlights: Prior to the match, Elias’ concert was interrupted by The New Day. Elias gets a brief advantage but is distracted by Xavier Woods playing Steve Austin’s theme song on a guitar on the outside. Elias gets a shot in before connecting with a vertical suplex. Kingston makes his comeback, hitting a crossbody from the top rope for a two-count. Elias gets hit with an SOS by Kingston but kicks out at two. Elias knocks Kingston off the rope before crashing down with an elbow drop to get the surprise win.

Storyline Progression: The New Day has mocked Elias and Jaxson Ryker over the last two weeks, poking fun of their feud with Braun Strowman.

Final Analysis: Decent enough match with a surprise win on WWE Raw. Elias and Jaxson Ryker have been booked like stooges and The New Day is an act that is treading water. Skim It. **

Final Analysis: Decent match but it felt incredibly pointless since it was a near repeat of last week. Benjamin and Alexander deserve better than this. Skim It. **

2) Asuka d. Charlotte Flair
Highlights: Rhea Ripley sits at ringside for the match. Asuka and Charlotte Flair quickly avoid each other’s strikes in a fast-paced exchange. Charlotte heads to the apron and catches Asuka with a stiff kick as she’s caught in the ropes. Both women fall to the floor before the commercial. Back from the break as Asuka connects with a dropkick and a knee strike. Asuka continues to counter Charlotte’s offense, connecting a German suplex and running kick for a near fall. Asuka attempts a submission but it’s blocked by Charlotte.

Asuka connects with a messy-looking modified code breaker but Charollte bounces back while taunting Ripley on the outside. Back inside as Asuka fails to apply the Asuka lock while struggling with her knee. Charlotte hits a spear on Asuka’s knee and attempts a figure four which is broken up by Ripley on the outside. Charlotte’s attention is deflected allowing Asuka to roll her up for the win. After the match, Charlotte beats down the referee.

Storyline Progression: Charlotte Flair kicks of WWE Raw and runs down both Asuka and Rhea Ripley. Asuka comes to the ring and predicts that she will be victorious in their main event match. Ripley’s music hits before she doubles down and predicts an Asuka victory.

Final Analysis: Solid match that had a few noticeable botches. Asuka getting the win made sense for her to stay strong while allowing Charlotte to snap in the process. Skim It. **3/4

1) Riddle d. Randy Orton
Highlights: Randy Orton jumps to an early advantage but Riddle counters a suplex into a suplex. Riddle is tossed off but goes for another sleeper causing Orton to retreat outside. Orton pulls Riddle off the apron and backdrops him onto the announce table before the commercial. Back from the break as Orton unloads on Riddle with a series of stomps before getting a two-count from a snap powerslam. Riddle makes a brief comeback with a series of chops before Orton pokes his eye to regain the advantage. Riddle sidesteps an Orton charge who dives into the ring post. A corner elbow and a senton get a two-count for Riddle. Orton catches Riddle with a rope-assisted DDT then gets caught in a roll-up for the upset victory.

The vicious Viper @RandyOrton meets the tenacity of @SuperKingofBros with a ruthless counter that sends the Original Bro crashing down on the #WWERaw announce table. pic.twitter.com/u4iEXFipz2

Storyline Progression: During a stage interview with Randy Orton, Riddle interrupted and attempted to recruit the Viper into a tag team. Orton wasn’t pleased with the disrespect and demanded a match on WWE Raw.

Final Analysis: Good match and a much-needed win for Riddle who had been on a downturn following Wrestlemania. Worth a Watch. ***1/2