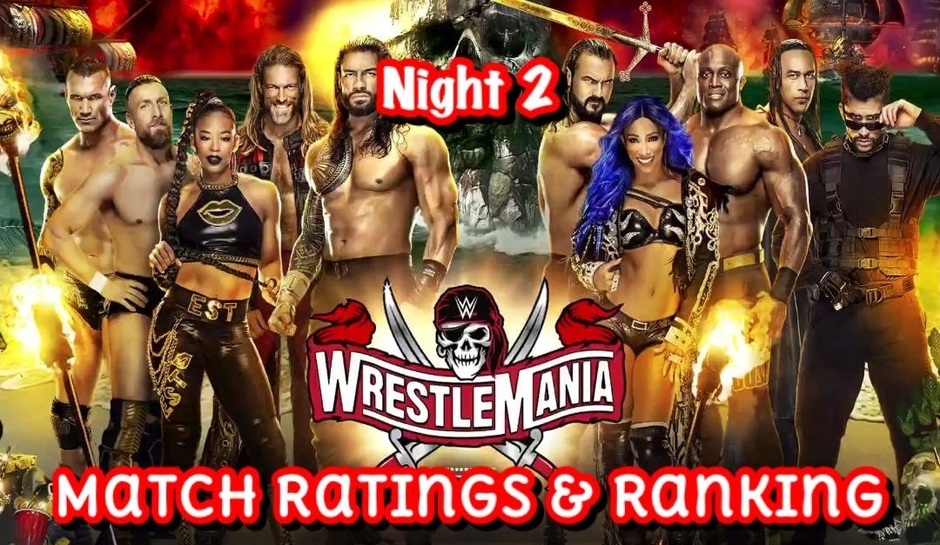 WWE Wrestlemania 37 kicked off with Night 1 as a major success as Bianca Belair defeated Sasha Banks to become the Smackdown Women’s Champion. On Night 2, Roman Reigns defended his Universal Title against Edge and Daniel Bryan in a Triple Threat match. Randy Orton finally faced off with The Fiend as Asuka was challenged by Rhea Ripley.

Every match on WWE Wrestlemania 37: Night 2 will include highlights of the action and a final analysis. Each match will be given a star rating and be ranked from worst to best.

7) Randy Orton d. The Fiend
Highlights: Alexa Bliss appears alongside a giant Jack in the Box at ringside that reveals The Fiend who dives into the ring with a closeline. The actions spills to the outside as Orton backdrops The Fiend onto the announce table who brushes off the attack. Back inside, Orton continues to work over The Fiend, including a DDT. The Fiend counters an RKO with a mandible claw as fire ign6ites from the posts to reveal a bleedin6g Alex on top of the box. The Fiend is distracted and walks into an RKO for the win. The lights go off and back on as both Alexa and The Fiend disappear to boos from the crowd.

Final Analysis: This was…odd. Half match and live-action cinematic experience that just kinda fell flat. Skim It if you are into the story, but Take a Pass for everyone else. *1/2

6) Women’s Tag Team Championship: Nia Jax & Shayna Baszler (c) d. Natalya & Tamina
Highlights: Natalya gets the better of Shayna Baszler early on until they make tags to bring in Nia Jax and Tamina. Natalya comes in quickly to help a double team backdrop to Jax. Baszler makes the tag but is quickly back on the defensive until she connects with a stiff knee to the face of Natalya. Baszler and Jax exchange tags and keep Natalya in their corner until a hot tag is made to Tamina. Jax takes out both women with a second rope crossbody for a two-count. Tamina slams Jax but then misses a superfly splash. Natalya locks Jax in a sharpshooter until Baszler is tagged and chokes her out.

Final Analysis: They all tried hard but it felt clunky from start to finish. There were moments that were positioned to be epic but the match never got there. Could’ve been worse though. Skim It. **

5) Nigerian Drum Fight: Apollo Crews vs Big E
Highlights: Big E and Apollo Crews start things off with kendo sticks as they whip each other to the outside of the ring. Crews gets to the apron but is speared through the ropes by Big E. Both men fight to the apron where Crews connects with a death valley driver before grabbing the steel steps. Big E avoids the steps before grabbing Crews and hitting a rock bottom from the apron to the steps. In the ring, Big E sets up a table but Crews breaks a kendo stick over his back. Crews lays Big E on a table but misses a splash. A mystery man enters the ring and takes out Big E as Crews gets the cheap win and title.

Final Analysis: It was picking up steam until the lame ending that was so bad my 13-year-old son complained. Really weak finish to an otherwise pretty good match at WWE Wrestlemania. Worth a Watch. ***

4) WWE Raw Women’s Title Match: Rhea Ripley d. Asuka (c) (New Champion)
Highlights: Asuka uses her speed to avoid Rhea Ripley as the action heads outside. Back inside and Asuka is caught in the ropes until Ripley lands a stiff kick. Ripley uses her strength to overpower Asuka until the champion targets the leg with an ankle lock. Asuka heads up top and connects with a missile dropkick. Release German suplex by Asuka followed by multiple hip attacks that get a near fall. Asuka heads back up top but Ripley dropkicks her to the floor.
The fight heads to the apron where Asuka connects with a DDT to the floor. Ripley regains the advantage with a suplex from the apron back into the ring for a two-count. Ripley ducks a kick and land a Rip Tide pump-handle slam for the win and title.

Final Analysis: Solid match but it didn’t reach the level of the women’s title match from Night 1. Asuka had a long reign so it was expected that she’d drop it at WWE Wrestlemania. Worth a Watch. ***1/4

3) Kevin Owens d. Sami Zayn
Highlights: Kevin Owens quickly gets on the offensive on Sami Zayn who retreats outside after a corner cannonball. Zayn grabs Owens and hits a brainbuster on the apron. Back inside and Owens makes a comeback, getting a two-count after a frog splash. Owens hits a modified neckbreaker for another close count before Zayn lands an exploder suplex into the corner. A blue thunder bomb by Zayn is followed by another exploder and a brainbuster. Back up top, Owens reverses a superplex into a fisherman suplex followed by a stunner for the win.

2) US Title Match: Sheamus d. Riddle (c) (New Champion)
Highlights: Sheamus gets the early advantage, using his power to overwhelm Riddle. Sheamus unloads with multiple strikes across Riddle’s chest on the apron before a suplex inside gets a two-count. Sheamus heads up top but Riddle catches him with a Spanish fly. Riddle continues his offen6se, including a Broton. Riddle leaps into the ring but eats a stiff knee from Sheamus that gets another near fall. On the outside, Riddle connects with a springboard moonsault before the action returns inside. Sheamus attempts a top rope white noise but slips, adjusting into a standard version for a two count. Back up top and Sheamus lands a top rope knee drop that gets another close call. Riddle attempts a springboard moonsault but lands in a Brogue Kick as Sheamus wins the US Title.

Can we just TALK about THIS ENDING to the Sheamus/Riddle match?

Final Analysis: Solid match despite the botch. Sheamus and Riddle both brought it and the ending was stiff. Riddle was legit busted open the hard way. Worth a Watch. ***3/4

1) Universal Title Match: Roman Reigns d. Edge & Daniel Bryan
Highlights: All three brawl to start as Jey Uso connects with superkicks on Edge and Daniel Bryan. Edge attacks Uso and then targets Reigns as he slams him on the barricade and ring apron. Edge grabs Uso DDTs him on the steel steps. Bryan and Edge strike exchange in the ring before heading to the top rope. Edge counters a Bryan avalanche frankensteiner with a sunset flip for a two count as Reigns gets to the apron. Bryan hits a missile dropkick to Edge and then gets caught by Reigns on a suicide dive that ends in an overhead belly-to-belly suplex.

Back inside Reigns and Edge collide on a double spear attempt allowing Bryan to hit top rope head butts. Bryan applies the Yes Lock to Reigns who break free before applying it onto Edge. On the outside, Reigns gets the better of Bryan before powerbombing him through the announce table. As Reigns celebrates on the steps, Edge launches himself and spears him to the ground. Edge applies a crossface onto Reigns in the ring while using a broken piece of a chair for leverage. Bryan runs in to prevent Reigns from tapping and applies the Yes Lock on the other side.

Bryan charges at Edge with a spear before doing the same to Reigns. Edge gets a two-count after Bryan pulls the referee to the floor. In the ring, Edge beats both men with a chair, before Uso runs into the ring to eat a chair shot. Roman spears Edge before hitting him with a chair sandwiched with another chair, before pinning both men at the same time.

Final Analysis: Great main event. The show had been good but not great heading into the final match and it finally got the energy it needed. Roman Reigns has been on fire for the last year and he deserved to hold onto the title. Must-Watch. ****1/2