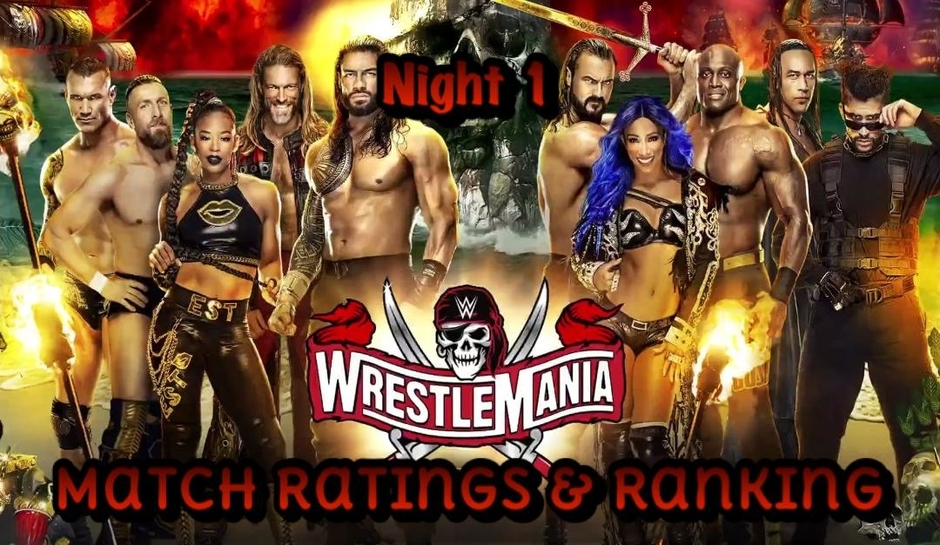 The biggest show of the year for pro wrestling and sports entertainment is WWE Wrestlemania. Night 1 of the big show took place on Saturday night, with Sasha Banks defending her Smackdown Women’s Championship against Bianca Belair in the main event. Bobby Lashley defended his WWE Championship against Drew McIntyre. Rapper Bad Bunny teamed up with Damon Priest to do battle against The Miz and John Morrison, and much more.

Every match on WWE Wrestlemania 37: Night 1 will include highlights of the action and a final analysis. Each match will be given a star rating and be ranked from worst to best.

7) #1 Contender’s Tag Team Turmoil Match: Tamina and Natalya d. Carmella and Billie Kay vs. Lana and Naomi vs. Liv Morgan and Ruby Riott vs. Mandy Rose and Dana Brooke
Highlights: Lana and Naomi start things off with Carmella and Billie Kay. Naomi gets rolled up by Carmella for the win as The Riott Squad enter. Ruby Riott connects with a top rope senton onto Billie Kay for the elimination as Mandy Rose and Dana Brooke are up next. Superplex and Swanton bomb from Rose and Brooke but Morgan reverses the pin for the elimination. Natalya and Tamina are next up as they double team Morgan upon entry. Tamina hits a superfly splash on Morgan for the pin and win.

Final Analysis: Mandy Rose slipped on the entrance ramp and the announcer announced the wrong elimination. That summed up this match, though it’ll be nice to see Natalya get a shot at the tag titles on WWE Wrestlemania Night 2. Take a Pass. *1/2

6) RAW Tag Team Titles Match: Omos and AJ Styles vs. The New Day (Kofi Kingston, Xavier Woods) (c) (New Champions)
Highlights: Chain wrestling with AJ Styles and Kofi Kingston to kick things off as Kofi gets the better of the exchange. The New Day exchange tags to work over Styles and cut off a potential tag to Omos but the big man finally enters. Omos makes his way in and destroys The New Day with back backers and slams. Kofi gets knocked out after an Omos two-hand chokeslam for the win and the titles.

Final Analysis: Decent match but it was done for the showcase of Omos who seemed over with the crowd. Skim It. **

5) Steel Cage Match: Braun Strowman d. Shane McMahon
Highlights: Elias and Jaxson Ryker attack Braun Strowman with a chair before the match. Shane McMahon uses the chair to beat down Strowman as the bell rings. Strowman prevents Shane from heading out of the door but McMahon grabs a piece of sheet metal from atop the cage to use as a weapon. Strowman absorbs the blows and avalanche splashes Shane between the ropes and the cage. Strowman’s leg buckles as Shane targets his knee before setting up a coast-to-coast dropkick. Shane climbs over the cage but Braun rips through the fencing to bring him back inside. Both men climb to the top of the cage as Braun tosses Shane back into the ring. A running powerslam by Braun finishes off Shane.

Final Analysis: This was mostly slow and plotting but they worked with what they had and made it work for the most part. Not much to see here until the cage rip and the Shane McMahon bump. Skim It. **

4) WWE Title Match: Bobby Lashley (c) d. Drew McIntyre
Highlights: Hardlock up to start at Bobby Lashley gets the better of Drew McIntyre with a stiff shoulder block. McIntyre bounces back with an overhead belly to belly suplex before closelining Lashley over the top rope. Lashley gets the upper hand on the outside of the ring before getting a two-count back in the ring after a neckbreaker. McIntyre starts his comeback, hitting two belly-to-belly suplexes and a neckbreaker of his own.

What does @DMcIntyreWWE have to do to become #WWEChampion tonight?! #WrestleMania

Lashley catches McIntyre with a spinebuster that gets a near fall. McIntyre slips on a superplex attempt but is able to toss Lashley off the top rope before falling into another spinebuster. McIntyre makes another comeback by hitting three future shock DDTs but can only get a two-count. Lashley retreats outside to avoid a claymore but eats a McIntyre flipping plancha. McIntyre applies a kimura but Lashley gets to the ropes.

Final Analysis: It started off a bit clunky, but expected due to a nearly half-hour rain delay. The match picked up steam and ended with a bit of a surprising result. Worth a Watch. ***1/2

3) Bad Bunny and Damian Priest d. The Miz and John Morrison
Highlights: The Miz calls to start the match with Bad Bunny who enters and lands a stiff right hand. Bunny connects with a spear and lands a flurry of right hands until The Miz gets the upper hand and takes the match to the corner. Bunny reverses a hip toss and arm drags The Miz out of the ring. The Miz rushes back into the ring as Bunny rolls him up for a two-count. The Miz attempts another comeback but Bunny hits a headscissors forcing the tag to John Morrison.

Bunny finally makes a comeback hitting a tornado DDT on The Miz before making a hot tag to Damian Priest who cleans house. Double falcon arrows by Bunny and Priest get near balls on Miz and Morrison. Priest hits a flipping plancha on Miz and Morrison on the outside before Bunny flies from the top onto both men. Bunny hits a Canadian destroyer on the outside before a crossbody doomsday device gets the win.

Final Analysis: Best celebrity match in WWE Wrestlemania history. It’s not even close. Bad Bunny proved all the doubters wrong. Props to Priest for helping out, and huge props to Miz and Morrison for being the punching bag and true professionals. Must-Watch. ****

2) Cesaro d. Seth Rollins
Highlights: Cesaro hits a quick uppercut to start off before a dragon screw leg whip leads to a failed attempt at a big swing. Rollins avoids the swing but eats a springboard Cesaro elbow. Rollins counters a top rope gut-wrench suplex with a buckle bomb on the opposite corner. Cesaro gets caught going up top again as Rollins hits a superplex and a falcon arrow for a two-count. Cesaro finally gets the big swing connecting with nine swings before a sharpshooter attempt. Rollins makes a comeback with a springboard knee, a sling blade, and a corkscrew top rope splash for a near fall.

Final Analysis: Great match from start to finish. Fluid pacing with simple but effective storytelling mixed with highlight moves. Check it out because it’s a Must-Watch. ****

1) SmackDown Women’s Title Match: Bianca Belair d. Sasha Banks (c) ( New Champion)
Highlights: With tears in her eyes, Bianca Belair locks up with Sasha Banks to start. Belair is able to avoid the attack from Banks before locking her in a double chicken wing that’s reversed to the outside. Banks hits a suicide dive but is caught by Belair who gorilla presses her back up the stairs and into the ring. Belair goes for a springboard moonsault but Banks grabs her hair as a counter before getting a near fall. Banks foes for a double knee in the corner but Belair catches her with a stiff spinebuster.

450 SPLASH connects, but it's NOT enough for @BiancaBelairWWE against @SashaBanksWWE! #WrestleMania, presented by @Snickers.

Outside the ring, Belair avoids a charge as Banks crashes into the barricade before barely making it back in the ring. A delayed verticle suplex by Belair keeps both women down before connecting with a closeline and dropkick to Banks. Belair attempts a 450 splash but lands on the knees of Banks. Back on her feet, Belair hits two powerbombs but a third is countered into a facebuster by Banks. Tornado DDT by Banks gets a close two-count before using Belair’s hair to assist on a Bank Statment crossface. Banks heads up top but is knocked off and hit with a 450 by Belair that only gets a near fall. Banks avoids a KOD but gets whipped with hair by Belair who connects with a KOD for the win and the title.

Final Analysis: I was skeptical with Banks/Belair main eventing WWE Wrestlemania, but I stand corrected. They did a great job and put on a worthy main event with an ending that had me pop with the hair whip. Must-Watch. ****1/4