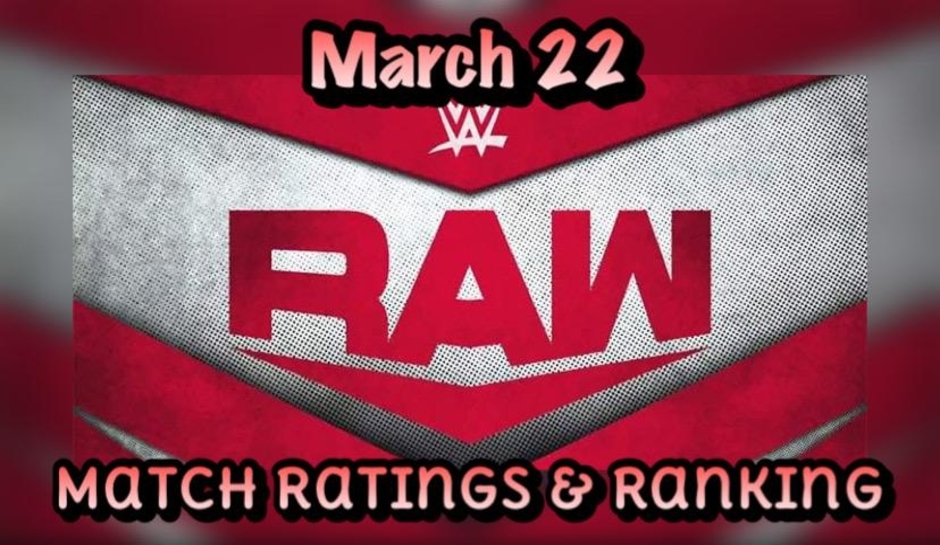 Only 24 hours removed from WWE Fastlane, WWE Raw kicked into gear heading into Wrestlemania. Bobby Lashley is set to take on Sheamus in a non-title match. Jeff Hardy and The Miz are scheduled to go one-on-one, as well as the Raw debut of Rhea Ripley.

7) Nia Jax and Shayna Baszler d. Mandy Rose and Dana Broke
Highlights: Shayna Baszler and Mandy Rose start things off before Niz Jax gets the tag. Dana Brookes hits a cartwheel elbow in the corner but is then on the receiving end of a Jax closeline. Reginald channels his inner Lanny Poffo and runs into the rung to do a cartwheel. Rose gets the hot tag and gets a two-count on Jax. Jax hits the Samoan Drop for the win.

Storyline Progression: Lana and Naomi join the commentary booth to talk about a potential tag title match with Nia Jax and Shayna Baszler.

Final Analysis: Nothing to see here. The women’s tag division is dead as a doornail and Reginald feels so out of place. Take a Pass. DUD

6) Braun Strowman d. Elias
Highlights: Braun Strowman plows his way through Elias before tossing him outside. A sound of a train goes off as Strowman shoulder blocks Elias and Ryker on the outside. Back inside and Strowman gets the win with a powerbomb.

Final Analysis: Quick destruction for Braun. This feud is not gaining traction with casual fans or those on the internet. If WWE can’t win over at least one of those groups, I’m not sure why they stick with it. Take a Pass. SQUASH.

5) The Miz d. Jeff Hardy
Highlights: Jeff Hardy calls out John Morrison for always interfering in The Miz’s matches. Morrison heads to the back while The Miz gets the early advantage in the match. Hardy makes a comeback, going off with his signature offense. Second rope splash by Hardy gets a two-count. The Miz sidesteps Hardy and his the Skull Crushing Finale for the win. After the match, Bad Bunny appears and hits The Miz in the back with a guitar and accepts his challenge.

Storyline Progression: Prior to the match, The Miz and John Morrison took part in a Miz TV segment. They debuted their mock music video to poke fun at Bad Bunny and Damien Priest. The Miz then went on to challenge Bad Bunny to a match at Wrestlemania.

Final Analysis: Standard match that was used to push The Miz towards his feud and match with Bad Bunny at Wrestlemania. Skim It if you’re into celebrity involvement but you can Take a Pass on the match. *

Storyline Progression: The Hurt Business got involved with the Lashley vs Sheamus match earlier in the night. Drew McIntyre then challenged the former Raw Tag Team Champions to a handicap match with the stipulation that they be banned from ringside at Wrestlemania if he won.

Final Analysis: Solid handicap match even if the outcome was predictable. Sacrificing the hottest tag team act in the company for the second time in a month is a questionable booking decision if nothing else. .Skim It. **3/4

3) Kofi Kingston d. AJ Styles
Highlights: Prior to the match, A Style and Omos run down the New Day. The New Day comes out to poke fun at the lack of chemistry between Styles and Omos. Kofi gets the better of Styles on the headlock exchange before getting a two-count off a shoulder block. Styles makes a brief comeback but once again is cut off by Kingston. That match moves to the outside before a commercial break. Back from the break and Styles is working a chin lock. Kingston breaks free and attempts Trouble in Paradise but eats a kick to the face from Styles. Styles goes for the Phenomenal Forearm but is distracted by Xavier Woods leading to a Kingston roll-up for the win.

Final Analysis: Fun match between two of the best in the company. This feud isn’t doing much for me but at least it gets AJ Styles on the Wrestlemania card. Worth a Watch. ***

2) Bobby Lashley d. Sheamus
Highlights: Bobby Lashley gets the early advantage despite a brief comeback by Sheamus. Sheamus lands on the apron but is knocked to the floor by Lahsley allowing the Hurt Business to go to work. After the commercial break, Lashley is soon shown arguing multiple times with the Hurt Business, allowing Sheamus to get a near fall. Sheamus is able to connect with multiple strikes on the apron before hitting Lashley with a flying closeline from the top rope to the floor. Cedric Alexander provides a brief distraction which allows Lashley to lock in the Hurt Lock for the win. The Hurt Business beat down Sheamus after the match, much to the chagrin of Lashley. Drew McIntyre comes out to make the save and stare down Lashley.

Storyline Progression: On last week’s Monday Night Raw, Bobby Lashley defeated Sheamus in a hard-fought battle. Sheamus is coming off a defeat at WWE Fastlane at the hands of Drew McIntyre but attempted to get on the winning track over the WWE Champion. Throughout the match, tension was teased between the Hurt Business, which only escalated during the post-match angle.

Final Analysis: This was a really good match to kick off WWE Raw, despite being yet another rematch from the previous week. I’m not sure what they are doing with The Hurt Business but hopefully, the tease is just that and they stay together. Worth a Watch. ***1/2

1) Asuka d. Peyton Royce
Highlights: Nice chain wrestling to start with Peyton Royce finding herself on the offensive with an elevated ankle lock on the champion. Roll through snap suplex by Royce gets a two count. Royce continues to use her athleticism to catch Asuka off guard, leading to taking the match outside before the commercial. Back from the break and both women are struggling to get to their feet. Asuka hits a Germa Suplex and a Shining Wizard that gets a two-count. Royce is able to connect with a chicken wing driver that gets a near fall. Codebreaker by Asuka gets another near fall. Asuka attempts an armbar but Royce fights out of it before being locked into the Asuka Lock for the win. After the match, Rhea Ripley debuts to challenge for the title at Wrestlemania.

This could very well be a statement-making match for @PeytonRoyceWWE.#WWERaw @WWEAsuka pic.twitter.com/zcLfSqsPqi

Storyline Progression: Peyton Royce spoke out on Raw Talk last week about not getting an opportunity against Asuka. On the flip side, Asuka is coming off a win over Shayna Baszler while getting revenge for getting a tooth knocked out earlier this month.

Final Analysis: This was the best women’s wrestling match on American TV so far this year. No gimmicks needed, just straight-up wrestling. Worth a Watch. ***3/4