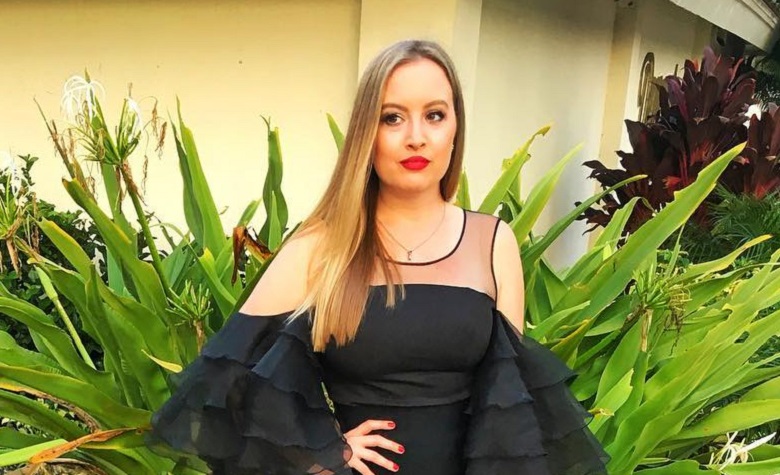 90 Day Fiance fan favorite Elizabeth Potthast Castravet is adorable as an adult but this throwback photo offers up a look at how she got there. Her claim to fame today puts her in the middle of a controlling husband, Andrei Castravet, and controlling father, Chuck Potthast.

It looks like this 90 Day Fiance celeb didn’t have care in the world as a teen in the photo below. Well, maybe she worried about that bird on her shoulder leaving a calling card, but that’s probably about it.

She probably never dreamed she’d be where she is today on the 90 Day Fiance series with a new husband and baby daughter. On the show, she’s planning her second wedding in Moldova, which is her husband Andrei’s native country.

That might sound like a fairytale on face value, as she’s planning her dream wedding in a far-off land. But that’s just not the case According to the 90 Day Fiance previews, it’s turned into a nightmare in real-life.

Men and women in Moldova seem to have their roles set by society. It looks as if Andrei, who is a bit overbearing in the US, is feeling the effect of his manhood in his native land. This isn’t a pretty picture for Elizabeth.

A post shared by Elizabeth Potthast Castravet (@elizabethpotthast) on Jul 4, 2020 at 2:20pm PDT

The way he talks to Elizabeth on the preview video has fans really fuming today. One of the many words that were bleeped out, coming from Andrei sounded like the “C” word to some fans. They hopped online to ask if he just called his wife the “C” word.

You get a taste of just how this goes for Andrei and Elizabeth in the video below.

As a son-in-law, this 90 Day Fiance celeb isn’t winning any awards. It seems Andrei expects Elizabeth’s father to foot the bill for their wedding in Moldova without even asking Elizabeth.

It also looks like while they’re in Moldova, Andrei reverts even further back into the fairytale that it’s a man’s world. Elizabeth isn’t willing to join him by role-playing a subservient wife. So, they clash – big time.

While in Rome, you sometimes have to do what the Romans do. But when it comes to wedding venues, Elizabeth won’t budge. When she’s thrown a menu and photos of the food options for her wedding she becomes indignant.

She tells her 90 Day Fiance husband that they can’t possibly serve food that she hasn’t tasted yet to her family. How can she possibly know if it is good enough for her family and friends without tasting it first, she demands to Andrei.

To Elizabeth, this is quite a dilemma. She seems more concerned over the lack of food samples than her husband just spitting out four-letter words at her.

That young kid with the bird on her shoulder in the photo above probably had no idea this is where life would lead her… but it did. Now she sits in a foreign country without food samples for her wedding with a husband who’s swearing up a storm. Who knew?