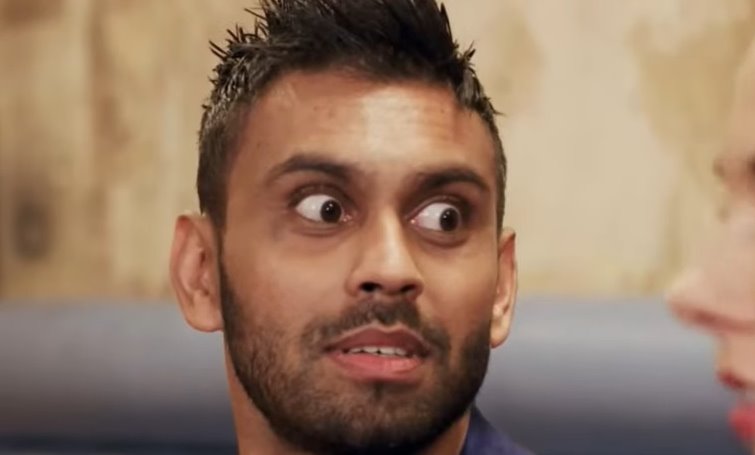 90 Day Fiance: Before the 90 Days star Ash Naeck shares he’s been dealing with a major health issue. While most of the world has been forced into quarantine to help flatten the Coronavirus spread curve, Ash Naeck is also in quarantine.

The relationship coach just revealed he has an autoimmune disease that puts him at higher risk than most. Although the reality star is healthy, he’s not taking any chances. Here’s what Ash shares about his health scare amidst the worldwide COVID-19 pandemic.

90 Day Fiance: Before the 90 Days celeb Ash Naeck shared with his Instagram followers that he’s been battling Hyperactive Thyroid since he was 21 years old. In fact, the reality star says at this point he’s pretty sure it’s advanced to Graves Disease. He’s been consulted with both a Naturopath and a holistic health expert. Both are in agreement that his disease has escalated.

Hyperactive Thyroid is an overactive thyroid. It occurs when the thyroid gland produces too much of the hormone thyroxine. It causes the body’s metabolism, causing unintentional weight loss and a rapid or irregular heartbeat. So it is quite serious. Now Ash is facing an even more daunting autoimmune disease with his Graces Disease diagnosis. People who have Grave’s disease have a thyroid that basically is attacking itself. Without proper treatment, Graves’s disease can lead to lead some very serious health issues like blood clots, stroke, heart failure, and other heart-related problems.

Read Please ?❤️ . It’s the seed that I plant from fear or love that will spawn and ripple in eternity, something I learnt from my beautiful friend and mentor @dr_espen . And my choice regardless of the hate, regardless of the cruel words, regardless of the way you racially abuse and judge me over those past few weeks and regardless of the amount of horrific cruel messages received, my choice will always be to plant the seed of love for it is the only way to a blissful life ? . Yes I have battled Hyperactive Thyroid since I was 21 and at this stage maybe Graves’ disease after consulting with a Naturopath and holistic health expert . I want to thank the few of you who were super nice and nurturing in reaching out and bringing this to my attention in the most caring way possible and for the majority or the rest that came in with so much hate and cruel intention whether bloggers or individuals, I still send you love no matter how fucked up your intentions towards me were ❤️ . So time to quaranftine and chill and worry about keeping away from covid-19. #consciousnessshift #spiritualawakening . . . #90dayfiance #90daysfiance #90dayfiancebeforethe90days #90dayfiancewhatnow #90dayfiancememes #90dayfiance_tlc #90dayfiancé @90dayfiancetoday @90dayfiancemuse @90dayfiance @90dayfiancenews @90dayfianceupdate @90dayfanatic @90dayfiancefanatic2

Ash Naeck addresses both his 90 Day Fiance fans and haters. It seems that the reality star has been inundated with messages. Sadly many are not positive. Ash says he’s received many messages that he considers racial abuse. However, Ash refuses to allow hate to prevail. He will only “plant the seeds of love” He also says, “it is the only way to a blissful life”

Ash thanks those who shared kind words, were super nice and nurturing while bringing this to his attention. Although he still has love for the haters, he shared some harsh words, ” I still send you love no matter how f**ed up your intentions towards me were”. And with those parting words, Ash Naeck returns to quarantine and “chill”. He will get through this with the love and support of his friends, family, and doctors.

90 Day Fiance: Before the 90 Days – Are Ash Naeck and Avery Warner Still Together?

90 Day Fiance: Before the 90 Days is a few weeks into its latest season. Right now we are watching Avery Warner travel to met her online boyfriend in his native Australia. So far it looks like the couple has quite the connection mentally and physically. However, they have a few challenges. Ash’s brother is not a fan of Ashley.

So, Avery teases we will have to catch to see how their love story ends. However, on this emotional Instagram post, Ash Neck made today, we can see Avery replied. So it does appear that these two lovebirds are still together and still very much a 90 Day Fiance success story.

’90 Day Fiance’: Big Ed Showers With Love Of His Life – Stays Clean During Coronavirus Outbreak
‘This Is Us’ Season Finale: An Emotional Family Gathering
’90 Day Fiance’: Larissa Perked, Puffed, and Gum-Less – Pic Of Cosmetic Procedure Outcomes
‘Grey’s Anatomy’ Spoilers For Season 16 Episode 19: Is Richard’s Trip to LA Doomed?
Mama June: From Not to Hot – June’s Nip and Tuck Look Unravels, Now Daughters Give It a Try