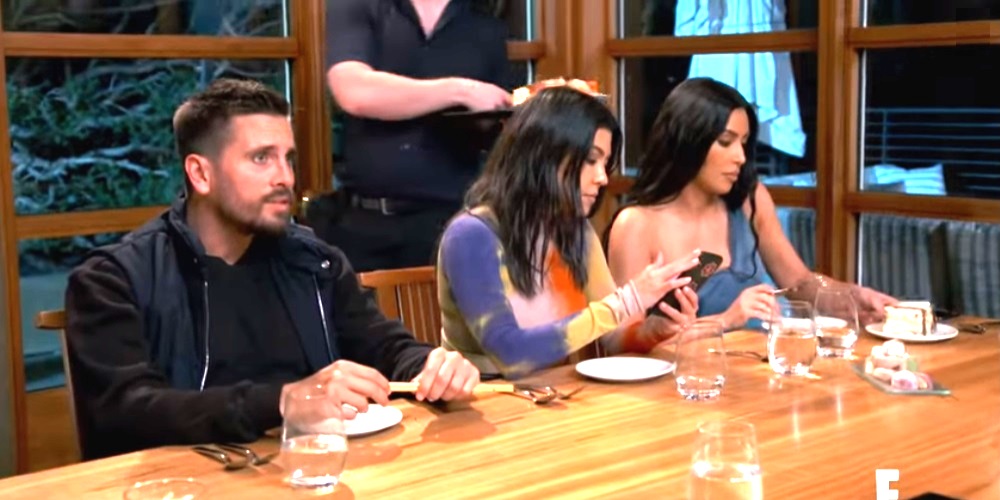 Keeping Up With The Kardashians Season 17 Episode 3 finds Khloe Kardashian worried about Kylie Jenner’s state of mind after the Tristan Thompson /Jordyn Woods scandal. Kim Kardashian’s new security measures have the family fed up. Scott Disick and Kourtney Kardashian’s’s children have behavioral challenges that lead to a heated discussion on discipline between Scott and Kris Jenner’s beau, Corey Gamble.

Keeping Up With The Kardashians: Khloe Has a Heart to Heart With Kylie About Losing Her Bestie

Keeping Up With The Kardashians’ sister Khloe Kardashian tells Kim K about a therapy session she had with Tristan while at a friend, Kimora Lee Simmons’ new Korean Spa in Beverly Hills. She’s determined to co-parent with him. Tristan accuses the family of turning their breakup into a media debacle. Of course, he’s referring to being caught kissing Kylie’s BFF, Jordyn Woods. The sisters scoff at that because that is not something they wanted to go public. Khloe mentions that Jordyn texted her and wanted to talk. However, she is reluctant to talk but she will for Kylie.

Next on KUTWK, Jordyn sees Kylie at the promotion of Kylie’s new skincare line. The three decide to go wine tasting in Napa. They call Kris and invite her along. So, the three of them hop on a plane. While on the planes Kris gets emotional about her firstborn turning 40. She cries because she won’t be around when Kylie’s daughter Stormi and Khloe’s daughter True turn 40. Khloe is not ready for emotional outburst so soon.

So she plans to have a talk with Kylie about Jordyn after they are all a little “lit”. Khloe tells Kylie she has been focused on how she was affected but she realizes Kylie lost her life long friend. Her little sister assures her that she is happy She believes everything happens for a reason. She loves Jordyn but she was her security blanket. So, it was time for her to move on. Plus, Kylie has her family so she will be okay. The trip ends with the ladies driving tractors while drinking wine.

Keeping Up With The Kardashians: Kylie Jenner opens up to Khloe Kardashian about losing best friend https://t.co/3V27g1htkC

On Keeping Up With The Kardashians, we learn there’s been a rash of armed robberies in Hidden Hills and Kim recently saw two men outside her bedroom window. She is still skittish over her Paris robbery so she beefed up her security at her home. Anyone who visits has to be checked in and out. Additionally, they must sign an NDA (non-disclosure agreement). This includes the family.
Kris complained to Khloe that the security never recognizes her. She’s annoyed that she has to always show ID  and sign in and out. Then at Kim’s Emsculpting session,  Kourtney gripes that Kim’s security had her and Scott show ID  and wanted them to sign an NDA. Kim laughed it off. However,  Kourtney states the security team should know the family.

Later while on an outing with Jonathan Kim gets a frantic call from Khloe because her security tacked Kris. You hear her mother in the background crying “ My Neck!”. Khloe says they have to call 911 and hangs up. Kim rushes home while viewing the surveillance tapes. She is horrified to see her mother being thrown to the ground. Once home she sees her mother lying on a stretcher in a neck brace. Kim cries in Khloe’s arms while Jonathan yells at security in disbelief, “IT WAS A PRANK!”. Seems Kris hired a stunt woman and fake security to play a practical joke on Kim. However, Kim got the message “loud and clear” and agreed to give the family security clearance.

Keeping Up With The Kardashians: Scott Disick and Corey Gamble Argue Over Discipline.

Kourtney and Scott’s method of discipline came into question on this episode of KUWTK. Khloe visits Kourtney’s house and Mason is debating with his mother about doing a chore. Reign and Penelope come and jump on Kourtney’s lap. They yell and hit their mom for attention. Khloe is taken aback but Kourtney admits she’s not a great disciplinarian. She gets a call from Mason’s school that he wanted to start a fight with another child. Mason Face Times his mother and admits what he did. Kourtney praises him for telling the truth and allows him to go on his play date.

She lets Mason off the hook with writing a letter of apology and a scheduled talk with his principal. After she and Khloe’s cryotherapy session Scott calls. She explains what happened with Mason. Scott disagrees with her letting Mason go on his play date. He wants Kourtney to pick him up. Khloe advises her sister to respect Scott’s wishes.

The family gathers to celebrate Jonathan legally changing his name to Food God. Kourtney brings up losing her nanny because Penelope scratched her face. She’s upset because her mom points out it’s more serious than Kourtney thinks. She demands it’s handled right away.  However, Kourtney states that there nothing she can do to or take from Penelope as punishment.  Penelope just doesn’t care. Corey chimes in to say if Penelope scratched him, he would “whip her ass”. Scott’s outraged and the two get into a screaming match. When Corey doesn’t back down, Scott, Kourtney, Kim, and Jonathan get up and leave. Kris cries and asks her boyfriend why he said anything at all.

Keeping Up with the Kardashians Rekap: Down with Corey Gamble! https://t.co/taB3qIdTGj pic.twitter.com/YuI7sVlRrd

After Kourtney ignored several of Corey’s texts they meet. Kourtney claims that she and Scott are uncomfortable with their kids being around him. Corey says although he doesn’t have kids he believes they should learn their actions have consequences. He was just expressing an opinion and would never actually hit someone else’s child. Scott visits Kourtney and his kids. They complain about the family being critical and judgmental of their parenting style. In the end, they decide to work together to decide what’s best for their kids.