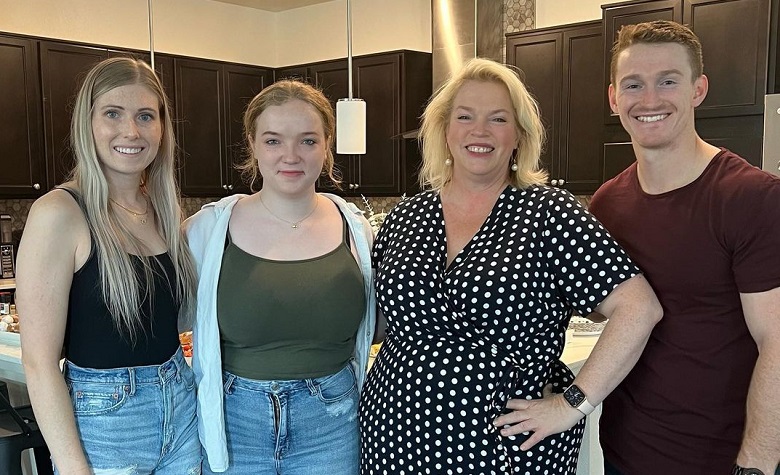 Sister Wives star Janelle Brown has been keeping in touch with the fans, which they love. Most of the time, Janelle shares adorable pictures with her kids. She’s been sharing her healthy lifestyle as well, and it seems that the number of people wanting to join her journey is steadily increasing. Fans are also glad that Janelle and Christine Brown are still going strong behind the cameras. They’ve been traveling a lot with their kids, and some think it’s only a matter of time before Janelle finally follows in Christine’s footsteps. Now, Janelle is back to share another update for the fans. This time, Janelle shared her family picture for Thanksgiving without Kody Brown.

In a social media post, Sister Wives star Janelle Brown shared a picture with her kids as they celebrate Thanksgiving. “Our Thanksgiving crowd. Grateful for family and friends. Thanks, @_michellepetty and @logantbro for hosting!” Janelle captioned. It’s clear that Janelle and her kids had so much fun for Thanksgiving. Fans are also glad that Christine Brown’s son, Paedon Brown, is with them for the holidays. Meanwhile, it was quickly noticed Kody Brown’s absence from the big gathering. According to some, it seems that Kody is still failing on showing up to his other families. Others also think that his absence will continue to fuel the other wives to finally leave and follow in Christine’s footsteps.

Sister Wives star Janelle Brown also took to social media to share her post-Thanksgiving tradition. According to Janelle, she usually eats pumpkin pie in the morning after the festivities. Janelle also revealed that she knows a lot of people doing the same thing. At this point, Janelle has been the only member of the plural family who has shared their Thanksgiving. Fans also think that the future holidays will be awkward in the plural family due to Christine Brown’s departure.

Sister Wives fans have been speculating about Kody Brown’s whereabouts for Thanksgiving. Apparently, he’s been out of sight for months. There have been reports that Kody has been staying with Robyn Brown. Some fans from Janelle’s recent post also believe that Kody spent Thanksgiving with Robyn, and will continue to do the same thing for future holidays. Meanwhile, fans can only hope that Kody will finally realize his mistakes and make it up to his wives that have been celebrating special occasions without him.

It’s clear to see how dysfunctional the plural family has become. Fans also think that Kody’s unfair relationship with Robyn has been fueling some of his kids to step up and call him out for mistreating their mothers. What are your thoughts? Let us know and watch Sister Wives Sundays on TLC.