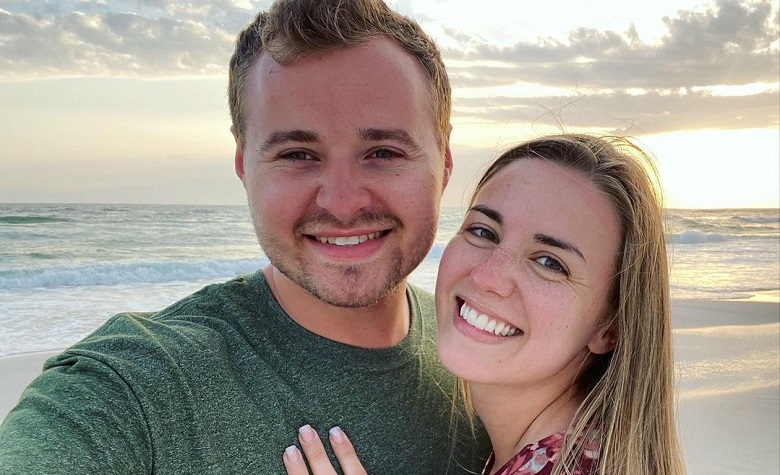 Counting On star Jed Duggar has been silent on social media for quite some time. Fans think that he and his wife, Katey Nakatsu, are busy with her lives as a newlywed couple. Some even suggested that the two stepped away from the online world due to the recent controversies of the Duggar family. However, Jed has a better explanation of their absence after all. Apparently, Jed recently returned to social media to announce that he and Katey are expecting their first child. Their announcement also comes just four months after their wedding.

In a social media post, Counting On star Jed Duggar announced that he and his wife, Katey Nakatsu are expecting their first child. “She tested positive, but not for Covid,” Jed captioned. The two are also holding a sign that says, “And then there were 3. Baby Duggar Spring ’22.” Moments later, Jed and Katey’s comment section was showered with positivity. Families and friends of the two congratulated them and sent heartfelt messages as they’re finally going to be parents. “So so happy for y’all! You’re going to be the best parents!” Jessa Duggar commented. “Congratulations!! So happy for y’all!” Jill Duggar added.

Jed Duggar Shares Video From Their Announcement To The Family

Aside from sharing pictures from their pregnancy announcement, Counting On stars Jed Duggar and Katey Naktsu also shared a video from their revelation with the Duggar family. In a YouTube post, Jed shared a video of the Duggar family watching a baseball game. Moments later, Katey surprised everyone after announcing that she’s pregnant. Michelle Duggar and Jim Bob Duggar were also surprised to hear the exciting news. The family hugged and gathered around Jed and Katey to congratulate them.

Counting On: Will TLC Document The Arrival Of Their First Child?

Counting On fans have seen TLC documenting the arrival of new baby Duggars before they canceled the show. At one point, TLC released a short episode featuring the arrival of Joseph Duggar and Kendra Duggar’s daughter, Brooklyn Praise Duggar. However, TLC wasn’t able to showcase the arrival of Jessa Duggar’s fourth child, Fern, due to their recent parting with the family. Apparently, TLC cut ties with the Duggars to give them privacy and space to deal with Josh Duggar’s child porn arrest. However, fans are still hoping that TLC will bring back the family once everything is settled with Josh’s ongoing case.