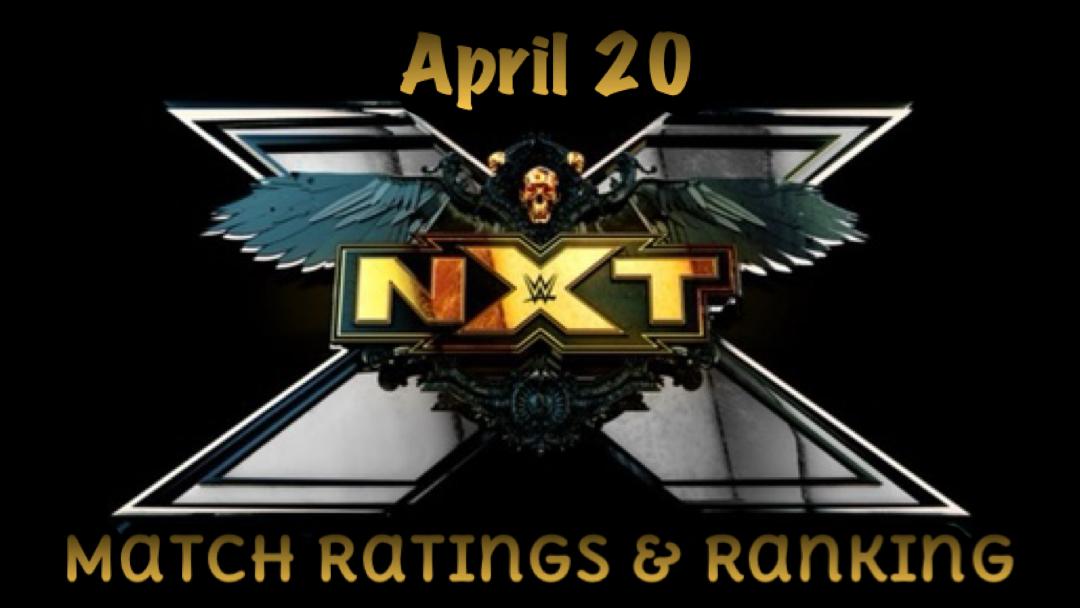 WWE NXT returns following their debut on Tuesday nights on the USA Network. New cruiserweight champion KUSHIDA issued an open challenge for his title. LA Knight went face to face with Dexter Lumis who has been preoccupied as of late. The debuting Sarray turned heads as she made her presence known in a hard-hitting battle with Zoey Stark.

Every match on WWE NXT will include highlights, what the storyline progression is, and a final analysis. Each match will be given a star rating and be ranked from worst to best.

5) Imperium d. EverRise
Highlights: EverRise gets a brief flurry of offense as Drake Maverick and Killian Dain appear at ringside, but it’s short-lived. Imperium connects with a modified Doomsday Device for the win.

Storyline Progression: EverRise have been putting in solid work on 205 Live and finally get some burn on WWE NXT. Imperium is expanding by working both NXT and NXT UK as they looked to keep their momentum going.

Finally Analysis: Quick victory to put Imperium over and continue to feud with Dave Maverick and Killian Dain. Take a Pass. SQUASH.

5) A Knight d. Dexter Lumis
Highlights: A lockup to start as Dexter Lumis gets the better of the exchange before LA Knight gets a quick roll-up for two. Knight floors Lumis with a big boot before hitting a flying shoulder lock. Knights comes off the ropes but walks into a backdrop from Lumis who takes the action outside. back in the ring and Knight avoids a charge from Lumis and connects with a neckbreaker before the commercial. ack from the reak and Lumis regains the advantage with a bulldog out of the corner and a side suplex. A slingshot suplex by Lumis gets another close count. The action heads back outside as Indi Hartwell is at ringside and serves as a distraction to both Lumis and Knight. ack inside and Knight hits a DDT on a distracted Lumis for the win.

Final Analysis: Solid match as LA Knight gets a much-needed win. Not sure where the Lumis’Hartwell story is going, but it’s interesting nonetheless. Skim It. **3/4

4) The Grizzled Young Veterans d. Breezango
Highlights: Zack Gibson and Tyler Breeze start things off. Gibson withstands Breeze’s offense and grounds him before making the tag to James Drake. Breezango douBle team the GYV who retreat to the outside. Tyler takes them out with a flying plancha as we head to a commercial. Back from the break, as Drake appears to twist his knee as the referee checks in on him. Gibson heads in to check on his partner but cheap shots Fandango in the process. A double team attack from the top rope gets another near fall. Fandango makes the hot tag to Tyler who cleans house on the GYV. The GYV are able to cut off Tyler and hit the Ticket to Mayhem for the win.

Storyline Progression: Prior to the match, Breezando march in the Queens Guard outfits to mock The Grizzled Young Veterans.

Final Analysis: Good match between two solid teams. The Grizzled Young Veterans are one of the better in-ring tag teams and will match up well against MSK. Worth a Watch. ***1/4\

3) Sarray d. Zoey Stark
Highlights: Lockup to start as Sarray reverses Zoey Stark’s attempt at a submission with a leg lock of her own. Indian Death Lock is locked in by Sarray but Stark is able to get to the ropes. Sarray lands in a sitting position as Stark hits the ropes and hits a knee strike and suplex for a two-count. Stark continues to work over Sarray, taking her to the corner with several kicks.

Sarray attempts a comeback as she dumps Stark to the apron and knocks her off with a dropkick. Stark heads back inside but is met with stiff right hands and a low-angle dropkick from Sarray. Sarray connects with a fisherman’s suplex that gets another two-count. Stark makes her own comeback with a half-nelson suplex and a sliding knee strike. Stark then misses a 450 splash but gets a two-count after a swing kick. Sarray bounces back with a sidekick and t-bone suplex for the win. After the match, Toni Storm attacks Stark before Sarray comes to her aide.

Hate to ruin a friendship moment 𝘣𝘶𝘵 Toni Storm doesn't seem to be over her loss to @ZoeyStarkWWE at #NXTTakeOver: Stand & Deliver. #WWENXT @SarrayWWE pic.twitter.com/GLkbI3Fgj6

Storyline Progression: Sarray has been a top star in Japan for over a decade and finally made her WWE NXT debut. Zoey Stark was still looking for her first win in WWE NXT, and put up her best effort against the Japanese sensation.

Final Analysis: Great debut for Sarray as she came across as an instant star. Zoey Stark continues to bring it every week she’s on WWE NXT and deserves a bigger push. Worth a Watch. ***1/2

2) Open Challenge: KUSHIDA d. Oney Lorcan
Highlights: KUSHIDA grounds Oney Lorcan with a series of submissions. Lorcan goes to a headlock but KUSHIDA is able to counter it into the corner. Lorcan goes to the top rope but it’s knocked to the outside as we head to a commercial. Back from the break as Lorcan continues to overwhelm KUSHIDA, wearing down the champion with an abdominal stretch. Lorcan charges into KUSHIDA but is met with a closeline. KUSHIDA heads to the top rope and double stops Lorcan’s arm. Lorcan makes a comeback with an uppercut and a standing blockbuster for a two-count. KUSHIDA bounces back with a series of kicks before applying the Hoverboard Lock for the win.

Storyline Progression: After pulling off the upset with a win over Santos Escobar on last week’s WWE NXT to become the Cruiserweight Champion, KUSHIDA issued an open challenge which is answered by Oney Lorcan. After the match, Santos Escobar appears at ringside while Legado Del Fantasma attack KUSHIDA from behind. MSK then rush the ring to make the save.

Final Analysis: Good match as KUSHIDA gets some credibility following his championship win. If we get a 6-man tag match between LDF and KUSHIDA/MSK, we’ll be in for a treat. Worth a Watch. ***1/2

Sometimes it's the simplest of moves that make all the difference. 👋 #WWENXT @KORcombat @CGrimesWWE pic.twitter.com/8H80C3kYbm

Back from the break as Grimes maintains his offense and gets a two-count after a hard whip to O’Reilly in the corner. O’Reilly makes his comeback with a charge in the corner before a suplex leads to another rope break. The action continues to go back and forth before O’Reilly hits a top rope knee drop for the win.

Singles Competitor Status: SOLIDIFIED… again!@KORcombat puts in the work to defeat @CGrimesWWE in the main event of #WWENXT on @USA_Network. pic.twitter.com/awcZ24yrl6

Storyline Progression: Kyle O’Reilly kicked off WWE NXT as he hinted about who he might channel next. Cameron Grimes heads to the ring in an attempt to recruit O’Reilly but was met with mockery and right hand.

Final Analysis: Really good main event as Kyle O’Reilly is positioned as a top performer on WWE NXT. Grimes held his own and doesn’t lose much in the loss. Worth a Watch. ***3/4